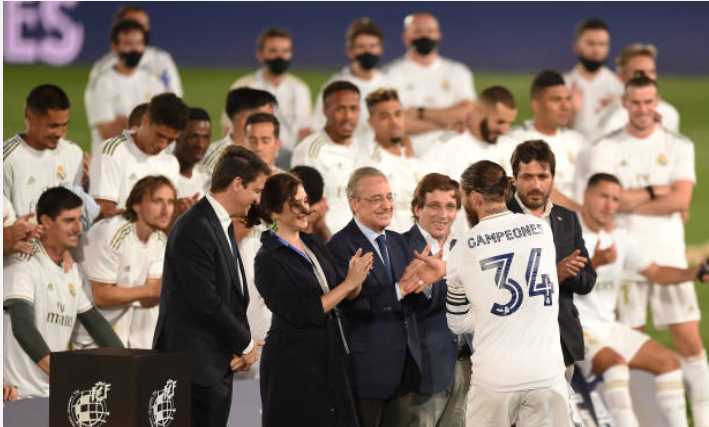 Real Madrid’s players have taken one for the club in admirable fashion. The 25 player squad led by captain Sergio Ramos has agreed to forgo their bonuses for winning La Liga and the Super Cup. The highest wage earners at Real Madrid are Eden Hazard, Sergio Ramos and Toni Kroos.

The bonus for the La Liga title amounts to €700,000, while that for the Super Cup trophy is €300,000. This means a total of €25 million were saved by Real Madrid in wage expenditures. This was crucial spending by the club in order to balance the books.

During a time when the football economy everywhere is suffering from the Covid threat, this move comes as a refreshing change. The players of the club already agreed to take a wage cut between 10-20% from the month of April in lieu of this.

The players’ voluntary pay cut enabled the club to retain its staff and project a good image to its supporters. While there were dissenting voices like those of Toni Kroos at the time (Kroos was of the opinion that players should donate their salaries after getting it), the team eventually fell in line as a whole.

The 10% pay cut for the remainder of the 2019-20 season was followed by another announcement on similar lines – the club would be slashing player salaries by 30% for the upcoming season. This was in the wake of the news that football would resume with no crowd participation – in early May.

Matchday ticket and season ticket sales for the 2019-20 season were projected to be around €161 million of Real Madrid’s €822 million budget. The halting of the season in mid-March, with 11 games of La Liga left to play and Champions League football to boot, meant that this part of their revenue took a major hit.

Real Madrid are not the only club to take these austerity measures. Major clubs like Arsenal and Juventus negotiated salary cuts with their players. Atletico Madrid and Barca slashed their player salaries by a whopping 70% for the remainder of the season.

Bayern Munich also reduced their player wages by amounts similar to Real Madrid – 20%. Manchester United players agreed to donate 30% of their own wages to keep club workers at their jobs.

This summer was supposed to be a hotbed of transfer activity during pre-Covid times. There were questions over the futures of Neymar, Mbappe and Sancho. All 3 of those players could have fetched well over €100 million in transfer fees in a normal economic situation.

Real Madrid was reportedly targeting the former duo to bring to the club. They’ve continually been linked to both of them for 3 summers now.

But in the current economic climate, there is no club willing to put itself so far out in the red in order to make a signing. The days of huge transfer fees (in excess of €100 million) will take a good while to come back.-9

The signing of Eden Hazard may be the last ‘Galactico’ move made by Florentino Perez for quite some time. Real Madrid have a world-class squad even without acquiring new attackers. Till the time Benzema ceases to be effective as a striker, they have adequate quality and depth in their forward line as well.