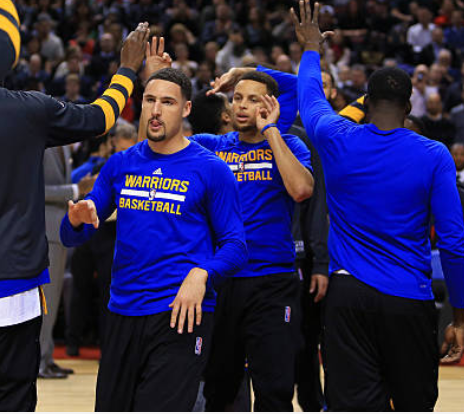 The introduction of the 3-point line for the 1979-80 NBA season changed basketball forever. 3-point shooting is a vital skill to have in the modern NBA. The explosion of 3-point shooting and ‘Moreyball’ in the past 7 seasons is primarily responsible for this. Therefore, Sportszion has taken the initiative to rank NBA’s 10 best 3-point shooters of all time.

There have been players in the past who have exploited their long-range shooting to great advantages. But clearly the most elite 3-point shooters are in the modern game. Which players rank as the top 10 perimeter shooters in NBA history? Read on to find out.

Unlike the other players on this list of best 3-point shooters, Durant is not well known for his 3-point shooting. He’s more famous for his midrange game. Barely does he ever take more than 5 3-pointers in a single game. Yet, the two signature plays of his NBA career so far are 3-pointers.

KD is more than capable of catching fire from range. With 1590 made 3-pointers in his career and a 50/40/90 season in 2012-13 under his belt, he has proven that he’s an elite shooter. KD is able to shoot efficiently both from pull-up as well as spot-up situations. At 7′ tall with shoes on, his shot is as unguardable as any in NBA history.

Steve Kerr was a bit-part NBA player for most of his career. The only reason he was in the league at all was his proficiency from range. So good was he, in fact, the Kerr is the most accurate if not one of the best 3-point shooters in NBA history by quite a margin.

At a 45.4% conversion rate, Kerr leads the next most accurate player on this list by more than a percentage point. That would be Seth Curry, brother of the NBA player you would expect to see higher up this list.

Through 14 seasons in the NBA, JJ Redick has carved himself a niche as one of the best snipers in the league. Redick is primed to break into the top 10 all time best 3-point shooters list in the NBA next season.

Currently sitting on 1884 made 3-pointers, the veteran needs 107 more makes to pass Jason Kidd at 10th place. This is a figure eminently within his grasp. Redick has a career 3-point percentage of 41.6%, good for 17th all time.

Of all the players in this list, nobody works harder for their 3-pointers or is more unstoppable at manufacturing them than Harden. Easily one of the greatest iso scorers of all time, Harden literally toys with opponents before making his trademark step-back 3-pointers.

While Harden has the lowest career 3-point percentage of any player on this list, the reason for that is obvious. Over 80% of his attempts are unassisted, pull-up shots over the last 4 seasons. The sight of Harden breaking down the player guarding him, hitting with a move everyone knows is coming but nobody can stop, is truly a sight to behold. Harden is 5th all time in 3-pointers made with 2324.

The 2-time MVP with the Phoenix Suns is basically the president of the 50-40-90 club. Steve Nash retired with career percentages in the neighbourhood of 50-40-90, and as the most accurate free throw shooter in NBA history.

Nash netted 1685 3-pointers through 18 seasons in the league at a whopping 42.8%, good for 11th all time on the percentage list and 25th all time in made 3s. He would have been Stephen Curry lite in today’s NBA with its 3-point explosion.

Kyle Korver is the definition of a sharpshooter. Through the course of his illustrious NBA career, Korver has netted a whopping 2450 3-pointers in 17 seasons.

Klay Thompson might have the hottest hands in NBA history. Thompson holds the record for 3-point makes in an NBA game, netting 14 3-pointers in under 3 quarters against the Bulls in the 2018-19 season. He also has an explosive 37-point quarter to his name against the Sacramento Kings.

Klay really put up 37 points in one quarter ?

Warriors vs. Kings – 9am ET on NBA TV! pic.twitter.com/aewH4yq3Ii

His shooting form is a thing of beauty. Nobody has a prettier, more balanced shooting motion than him. He’s efficient with his movement and barely jumps while shooting, giving increased balance to his shot. No wonder he’s racked up 1798 3-pointers in just 8 NBA seasons (he missed the last one entirely).

You have to give respect to the OGs when it comes to 3-point shooting. Despite having an unorthodox form, Reggie Miller set numerous 3-point records while playing in an era that did not emphasize the skill. Miller finished his career with a whopping 2560 3-pointers made, good for 2nd all time.

Miller was the player to pioneer constant off-ball motion. Young players in the modern NBA still look to him as a guide to playing the shooting guard position .

Ray Allen’s career-defining moment came at its fag end, when he hit arguably the greatest clutch shot in NBA history against the Spurs in 2013. However, his career is far more than what he was viewed as towards the end – just a spot-up shooter. At his peak, Allen could score and playmake with the best of them.

Back out to Allen.

Seven years ago today, Ray Allen hit one of the most clutch shots in NBA history. pic.twitter.com/HhUOlTPdF6

Allen is the current leader in 3-pointers made, sitting at 2963 career makes. He finished his career with a 3-point percentage of 40.1%. He owned several makes and totals records ahead of the 3-point explosion, and will still be part of many top-10 lists for years to come.

If jump shooting is viewed as the most important basketball skill of all, Stephen Curry has to be viewed as the Baba Yaga of the art. His 0.3 second release combined with his constant off-ball motion tire opponents to no end.

Currently 3rd all time in makes with 2495 and 6th in 3-point percentage at an otherworldly 43.6%, it is no exaggeration to say that Curry’s advent has changed the game forever. It was his barrage of accurate 3-point shooting that forced the rest of the league to play to his tune. LeBron may have been the best player of the last decade, but Curry was the most influential.

That time when Steph called game ?

Steph is the greatest 3-point shooter in NBA history, and by some distance, I might add.

Anthony Davis free agency: What options does the big man have in this market?
Michael Jordan Vs. LeBron James: Has LeBron surpassed MJ on being the GOAT?