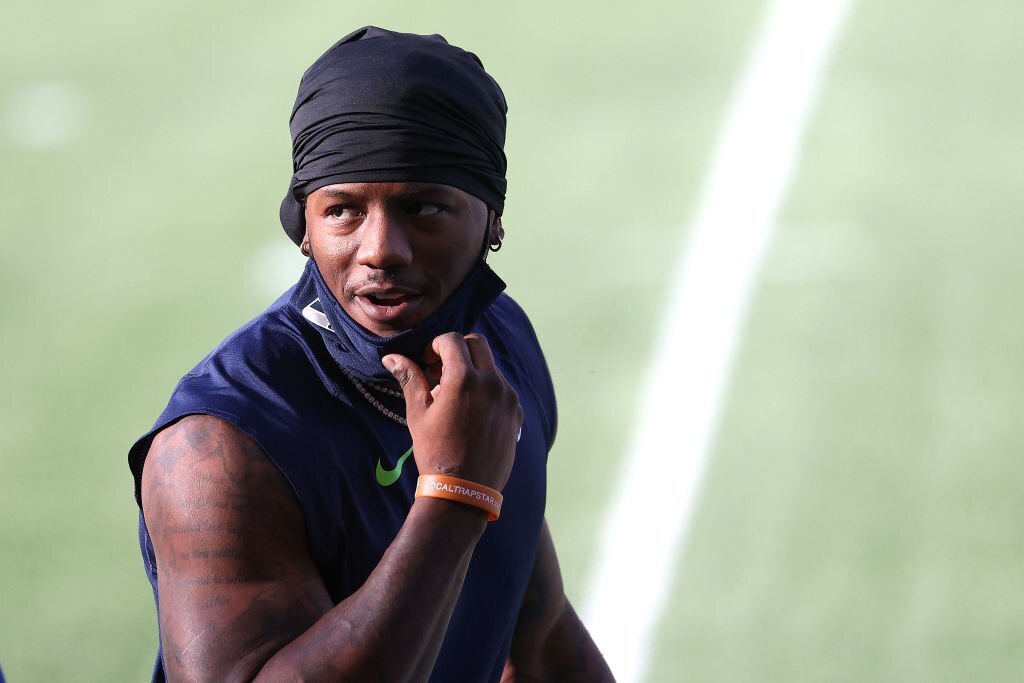 Chris Carson’s career has come to an end because of a major neck injury that ended his 2021 season with the Seattle Seahawks. NFL Network Insider Ian Rapoport reported Tuesday that Carson has opted to retire due to the injury.

Carson was the workhorse of the Seahawks’ run-heavy attack at his finest, topping 1,100 running yards in back-to-back seasons from 2018 to 2019 when he scored a total of 17 touchdowns.

Despite missing four games due to a foot ailment, the former Oklahoma State running back totaled nearly 1,000 yards from scrimmage and averaged nearly five yards per carry in 2020. Injuries, on the other hand, were a persistent issue, preventing him from ever playing a full NFL season.

Who is Chris Carson?

Christopher Carson is a former running back in the National Football League. He played professionally for the Seattle Seahawks and attended Butler Community College before transferring to Oklahoma State in 2016.

Although significant, the news wasn’t necessarily a surprise. Pete Carroll, the Seahawks’ head coach, suggested in June that Carson would have to give up football due to the neck ailment that kept him out of all but four games in 2021.

Prior to his recovery, Carson was exempted from the compulsory minicamp since his medical team had not yet given the clearance for him to return to the field. The former seventh-round draft pick’s range of motion was restricted by a vertebral fusion surgery in December.

NFL Network Insider Ian Rapoport said on Tuesday that the 27-year-old has decided to retire as a result of the injury. According to Rapoport, the decision was made after the running back failed his physical. Later on Tuesday, the Seahawks designated Carson as having a failed physical, which entitles the running back to injury protection benefits.

How did Chris Carson injure his neck?

In a match against the Minnesota Vikings in 2019, Erik Wilson performed an ugly tackle to Chris. Carson crashed in the field immediately with a head first impact. Anthony Harris slipped on his head when he fell, further injuring his neck. That was the first time he suffered a major neck injury.

On Oct. 3, 2021, Carson suffered a neck injury again during Seattle’s Week 4 victory over the San Francisco 49ers. A week later, the veteran was placed on injured reserve. In November, he underwent neck surgery to conclude his season.

Given the competition, it’s no minor achievement that Carson’s physicality and toughness helped him become one of Seattle’s best running backs ever. Sadly, he might no longer be able to perform without risk. According to sports medicine physician Jesse Morse, this is how Carson’s neck’s internal metal hardware appears following surgery.

Who will the Seahawks replace in Chris Carson’s absence?

The Seahawks will move forward with Rashaad Penny and rookie running back Kenneth Walker III now that Carson has departed. Walker being chosen by Seattle in the second round highlighted the haziness of Carson’s future. Walker and Penny will compete for playing time in Pete Carroll’s preferred ground-first attack now that the veteran is stepping down.

Who are Carson’s family, wife, and daughter?

Since Chris Carson has not disclosed any information regarding his relationship, it is unclear if he is dating anyone. He has had at least 1 relationship in the past, according to CelebsCouples.

However, he has a daughter who is his biggest inspiration but there is insufficient information about his spouse or girlfriend. “My daughter is my biggest inspiration. She was born in June. My whole mindset before was playing football, but now it’s like playing ball to provide for my daughter. It’s a whole new inspiration.” Said Chris.

How much are Chris Carson’s career earnings?

Carson signed a two-year, $10.4 million contract in March 2021. He was guaranteed $4.5 million in basic salary for the 2022 season, with a $6.1 million salary cap hit. According to the league’s collective bargaining agreement, being released with a failed physical designation entitles Carson to injury protection payments. His career earnings total around $10 million.

Chris Carson’s net worth at the time of his retirement

Chris Carson possesses a staggering net worth of roughly $2 million, which is derived from his 5-year NFL career before retiring due to injury. Carson should be eligible for the injury protection benefit since it has been found that he is physically unable to perform as a result of a severe neck injury.

The maximum injury protection payment for a player physically unable to function in the 2022 league year is $2 million, according to the CBA. The team’s salary cap will be charged $1.2 million, with the remainder considered as a player benefit expense. According to the NFLPA website, Seattle has $16.9 million in salary cap room. So, his net worth is expected to increase if he receives the injury protection payment.