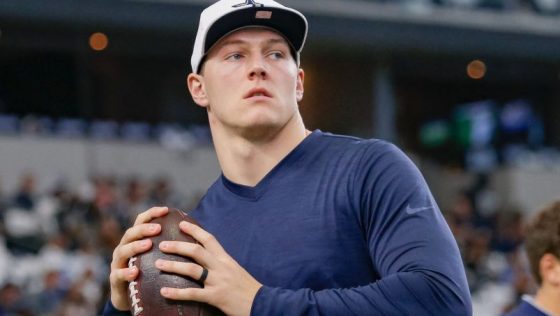 The curtain for the 2020 NFL draft has been raised already! One week’s just passed with some heated stats and results. But seems like Leighton Vander Esch is going to have a tough time throughout the whole season.

The linebacker of the Dallas cowboys left the field early on Sunday in the opener match against the Los Angeles Rams, that too in the first half with a broken collarbone. Ian Rapoport reported that “He’ll land on Injured Reserve, a brutal blow. The nerve center of the defense and one of its top playmakers, Vander Esch’s loss stings. He’ll be back this season.”

#Cowboys star LB Leighton Vander Esch suffered a fractured collarbone early in the game tonight, source said. He’ll land on Injured Reserve, a brutal blow. The nerve center of the defense and one of its top playmakers, Vander Esch’s loss stings. He’ll be back this season.

But the surgery will cost him a lot and he might miss six to eight weeks of the season to recover fully. Leighton is not new on the injury board and his health has been a frequent issue for him early in his standout NFL career. After playing all 16 games of his rookie campaign, Vander Esch was limited to just nine contests last season with the neck ailment, which eventually required offseason surgery. And this time he has to skip several matches for this.

The player gave a statement last time about his continuous injuries and its effect on his career. “I’m not worried about my neck anymore. I don’t talk about it. It is what it is, and people can think what they want to think about it. But I’ve been training for four months hard and I’m already better than I was before I got hurt with that injury. It doesn’t affect me. I just don’t talk about it. It’s not worth wasting time about”

But little did he knew that it would be his biggest hurdle to clear this time. After the selection in 2018, he made the Pro Bowl as a rookie with 140 tackles. He tallied 72 tackles through nine games in 2019 before the neck injury ended his season.

The Dallas team is thinking about Joe Thomas to fill in at middle linebacker moving forward as a replacement.

On the other hand, the Cowboys lost promising tight end Blake Jarwin due to a torn ACL, according to Michael Gehlken of the Dallas Morning News. Dallas Cowboys are having a hovering time for sure. Let’s wait to see who fills the positions and fastens up the game now!

After evaluation, Cowboys fear that TE Blake Jarwin has suffered a torn ACL, source said. An MRI to reveal injury's full nature but the team's belief is Jarwin has been lost for season. Injured right knee in second quarter.

The NFL-NFLPA authority actively deals with everyone’s safety, sends memos to the clubs
100 years of NFL journey, set a milestone in American sports