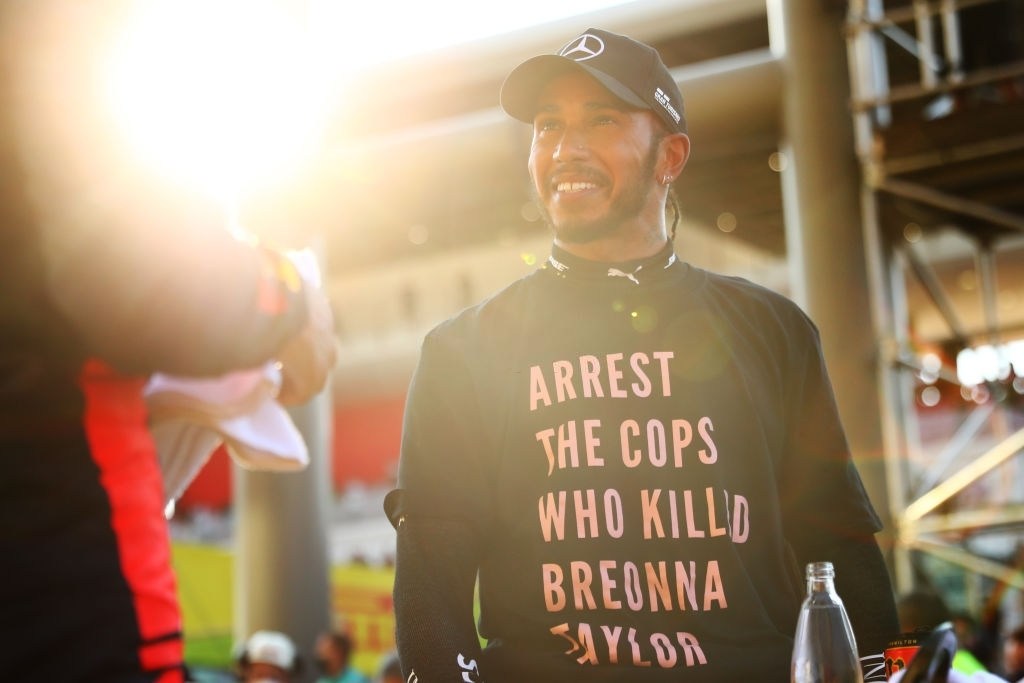 The FIA and Formula One initiated an agenda this year in support of all lives matter and equality ‘#WeRaceAsOne’. The initiative was of key importance for Lewis Hamilton. While the entire crew of F1 wore All Lives Matter t-shirts, Hamilton’s t-shirt had the label of Black Lives Matter. He among all has taken the lead interest in this matter ever since. Hamilton made his intention clear in the 2020 season about his motive of racing against racism. From kneeling at the race to protesting against racism in social media handles, he has done a lot to the cause.

On 13 September 2020 at the Tuscan Grand Prix which was held in the circuit of Mugello he flaunted a t-shirt in protest of racism. It was for the incident that took place this year in the month of March, where a woman of black ethnicity was shot for consecutive eight times by the police of the U.S at her own residence and justice has not been served yet since none has been arrested yet. Hence, the t-shirt read “Arrest the cops who killed Breonna Taylor”.

Lewis Hamilton at the interview declared, “I’ve wanted to bring awareness to the fact there are people being killed on the street. And someone was killed in her own house and they were in the wrong house and those guys are still walking free.”

The FIA and Formula One officials consider his show of extreme protest against the laws and regulations of the F1 rulebook. They asserted this to be the cause for lofty political issues that can affect the sport itself which has been a non-political sport since times immemorial.

The FIA further clarified their sporting code of conduct which has a prohibition towards such action in their staged racing track to be upheld “affixing to their automobiles advertising that is political or religious in nature or that is prejudicial to the interests of the FIA”. The FIA rulebook in regard to political influence further states, “refrain from manifesting discrimination on account of race, skin color, gender, sexual orientation, ethnic or social origin, language, religion, philosophical or political opinion, family situation or disability in the course of its activities.”

The Mercedes team principal Toto Wolff conveyed that they had no restriction posed on what Hamilton would want to wear in the race that was related to the agenda of anti-racism, they will support the racer in what he wishes to showcase in his attire. He further stated that the entire Mercedes team was in support of Hamilton’s effort to show protest against the dirty regions that exist among human being against one’s ethnicity in society.  “No question – it is entirely his decision. Whatever he does, we will support.”

Toto Wolff affirmed, “The team is fighting against any kind of racism and discrimination and it is Lewis’s personal fight for BLACK LIVES MATTER and with all the support we can give him. It’s his call. Black Lives Matter is something that is important to all of us and we have supported Lewis all the way. The much broader movement is obviously the fight against any kind of racism and discrimination – and we as a team and as a corporate have always put an emphasis to fight against that injustice.”

As seen in accordance with the situation the entire Mercedes-Benz is in acceptance of the entire matter that happened on the weekend of the Tuscan Grand Prix. They stated it to have no political affluence at all.  “We’re not bringing politics into F1; these are human rights issues that we’re trying to highlight and raise awareness of.”

The investigation is still on for the FIA to look into the matter further and crack the case of innocence or guilt in this matter. Exceeding limit is not what FIA appreciates.

Before You Go: Lewis Hamilton stumbled upon various hurdles before taking the lead again at the Tuscany Grand Prix

The Tuscan Grand Prix at Mugello Circuit in 2020 was the most chaotic and crazy race witnessed in ages. Hamilton is the champ of the race

Alex Albon’s Journey to the Formula One Podium under the flag of Thailand in Tuscan Grand Prix; Circuit of Mugello

Alex Albon’s Journey to the Formula One Podium under the flag of Thailand in Tuscan Grand Prix; Circuit of Mugello
Jean Todt discontented with the Reverse Grid launch proposal, sensing it can curb the uniqueness out of Formula One