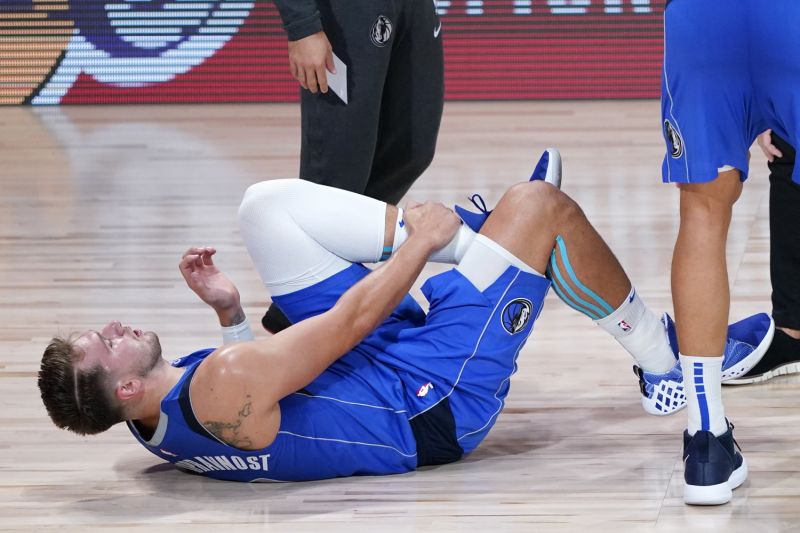 Luka Doncic is uncertain to be available for Mave’s Sunday afternoon match due to his sprained left ankle. The Dallas Mavericks star picked up the injury during the fourth quarter what made him bound to depart later.

Doncic was limping when he was leaving the tunnel with an ice pack covering his ankle. His exit came as a huge loss for his team handing them a 130-122 loss against LA Clippers in Game 3.

The Slovenian wanted to defend Kawhi Leonard but unfortunately rolled his left ankle when it was still 3:58 left in the third quarter. Then he walked off the floor and re-taped his injured ankle to overcome the pain instantly.

In fact, Doncic returned to the floor at the beginning of the fourth quarter of the match. But his injury didn’t get enough healing and so he hobbled off the floor with 9:02 left.

Doncic has already missed 11 games in total this season because of struggling with his sprained right ankle.

“It’s not that bad,” said the Mavericks star. “Honestly, I had luck it’s my left ankle. It’s not my right. It’s a little sprained. We’ll know more tomorrow.”

“Honestly, I was lucky it wasn’t the other one. . . It’s just a little sprained.”

BUT he said he’s having an MRI tomorrow. pic.twitter.com/jE2eOs8nUv

The 21-year-old also added he would undergo an MRI test on this Saturday.

Game 4 of Dallas Mavericks will take place this Sunday at 3:30 pm.

“The game is early Sunday, which doesn’t help things, but we’ll see,” Dallas coach Rick Carlisle responded. “We’ve got every advanced treatment modality that you can have, as every team here does. We’ll see how this responds in the next 36 hours.”

Doncic tried his best to perform when he was there but he was way below his potential with his 13-point, 10-rebound, 10-assist on the night.

Even that performance makes him the third-youngest player to earn a playoff triple-double in the NBA. The other two record-holders are Magic Johnson and LeBron James.

Carlisle said Doncic’s return didn’t cause the augmentation of his injury at all. The player got approval as their director of player health and performance Casey Smith told Carsilic to continue the match.

But later, Doncic failed to compromise with his injury after coming back in the fourth quarter.

The player showed calmness while leaving the game. But eventually, his frustration was apparent in his reaction when he knocked over his chair before going back to the locker room.

“I just wanted to get in,” said Luka Doncic. “We still had a chance to win and to help my teammates. Obviously, I could still run a little bit, but I couldn’t push off my left leg, so it was better to go out and to let somebody else play.”

Raptors vs Nets game 3 review: Raptors are one win away from Conference Semifinals
Paul George says “I am no James Harden” after shooting 4-24 from the floor