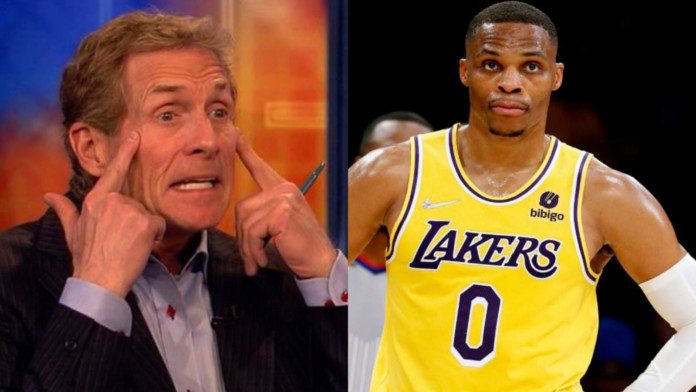 Skip Bayless’ Twitter username might be @RealSkipBayless, however, he is famous for his unrealistic arguments. The war of words has been going on for a long time between Westbrook and Bayless, who often mockingly refer to the former MVP as “Westbrick” because of Westbrook’s tendency to miss (or “brick”) shots. It all started when Bayless posted this tweet,

On the other hand the 33-year-old point guard, Russel Westbrook, became enraged and tired of Skip’s continuous trolls. He finally decided enough is enough and it is time for raising his voice against bullying. A furious Westbrook replied,

Yoooo… watch your mouth. Don’t say anything here you wouldn’t say to my face. https://t.co/0u8nFXYLY8

Interestingly, instead of putting out the blazing flames, Skip poured more gasoline into the heated argument. According to the 70-year-old, Russell was the real nightmare for the Lakers last year because of his horrible performances, and now he is playing the victim card here. Bayless also thinks that instead of going after his critics, he should just “shut up” and focus on improving his performances. In reaction to Westbrook’s tweet, Skip replied,

Amazing & amusing how Russell Westbrook is trying to turn himself into a victim after he was such a nightmare for Laker Nation last yr. All he has to do to shut up/shut down us critics is simply to MAKE SHOTS & QUIT COMMITTING SADLY COMICAL TURNOVERS. But … it's critics' fault.

Apparently, this isn’t the first time the sports columnist involved himself in an argument with NBA players and their families. Before the reaction of Russel, his wife, Nina Westbrook previously lashed out at Bayless a few months ago in a similar incident.

“You’ve got to stop calling people out of their name,” Nina Westbrook responded to a tweet in which Skip referred to her husband as “Westbrick.”

“You are very disrespectful and a bully,” she continued. “This is why so many young people think it’s okay to exhibit this type of behavior. Social media has become such heinous place because of people like you. My name is Westbrook.”

She added, “I’m tired you you @RealSkipBayless calling my husband out of his name. It is extremely childish. That is my name as well, and many other peoples name. You’re disrespectful, and I’m extremely offended by your behavior. You should apologize.”

You’ve got to stop calling people out of their name. You are very disrespectful and a bully. This is why so many young people think it’s okay to exhibit this type of behavior. Social media has become such heinous place because of people like you. My name is Westbrook.

Jordan Poole Net Worth 2022: Salary, Endorsements, Mansions, Cars, Charity and More
“That black man is none other than LeBron James” Draymond Green drags racial disparity in between tug of war with Skip Bayless