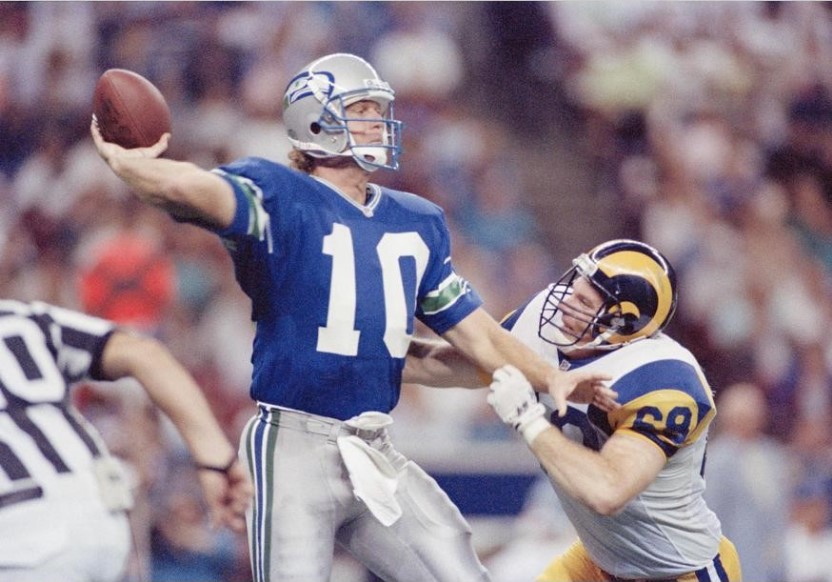 What’s most obvious about NFL players besides their sportsmanlike feats? No wonder, the answer is going to be their heights which arguably affect their performance regardless of the different positions.

Research shows that taller quarterbacks have higher odds when it comes to reaching more yards per attempt than the smaller ones. Also, there’re reasons why every kid who wishes to enter the league aims for 6′2″, the average for an NFL player.

The effects of height may not be equally true for everyone, but some guys stand too tall to be ignored. In this article, we’ll be talking about the tallest NFL player with some others who are known as much for a towering physique as they’re for their amazing presence on the field.

Everyone that you’ll see here is not only among the tallest players in NFL but also the finest performers whose abilities can instantly turn an uneventful show into an eye-opening display.

10. Jared Veldheer – Only Hillsdale Alumnus to Be Drafted Since 1980 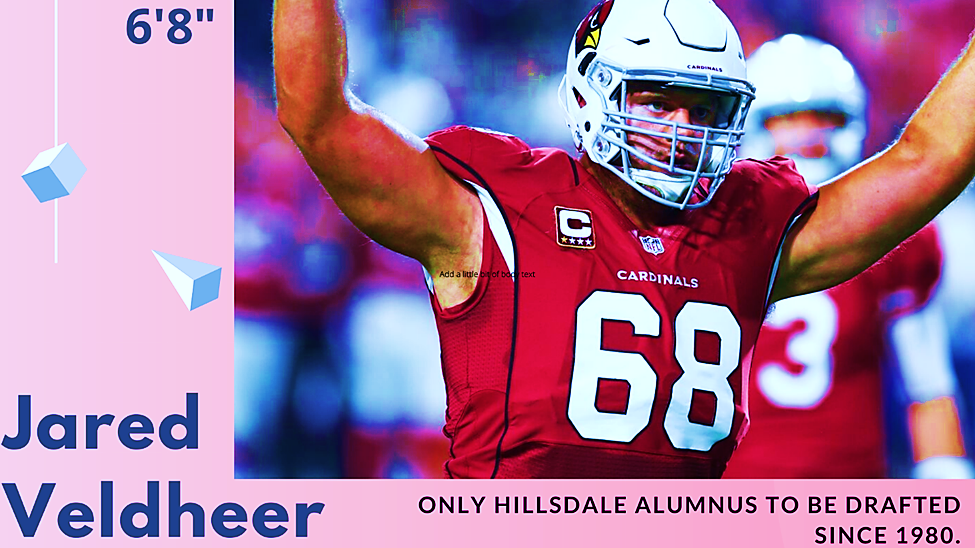 Jared Veldheer is currently playing for Green Bay Packers. The 321-pound offensive tackle became the tallest NFL player ever to play in the center position when he signed up for Oakland Raiders in 2010.

Veldheer was named Most Valuable Lineman in high school. He played varsity football for Hillsdale College, co-captained the team in 2008, and won the All-American honors in 2009. After graduating, he was picked by the Oakland Raiders as a center to be shifted to the offensive tackle position after the first game.

After playing in four seasons for Oakland Raiders as a full-time starting left tackle, Veldheer joined Arizona Cardinals by signing a five-year, $35 million contract. So far, he has started 113 games out of the 120 appearances. He played at the left tackle position throughout the most of his career (91 games). He played the right tackle in 21 games.

Veldheer announced his retirement on May 21, 2019, right after signing up for the New England Patriots. But, he restarted playing after several months for the Green Bay Packers. He has won multiple honors while playing for high school and college e.g. Offensive Freshman of the Year (2006), Hillsdale’s Offensive Linesman of the Year (2007, 2008), and First-team All-GLIAC Hoors 2008).

9. Cornelius Lucas – Started with the Lions 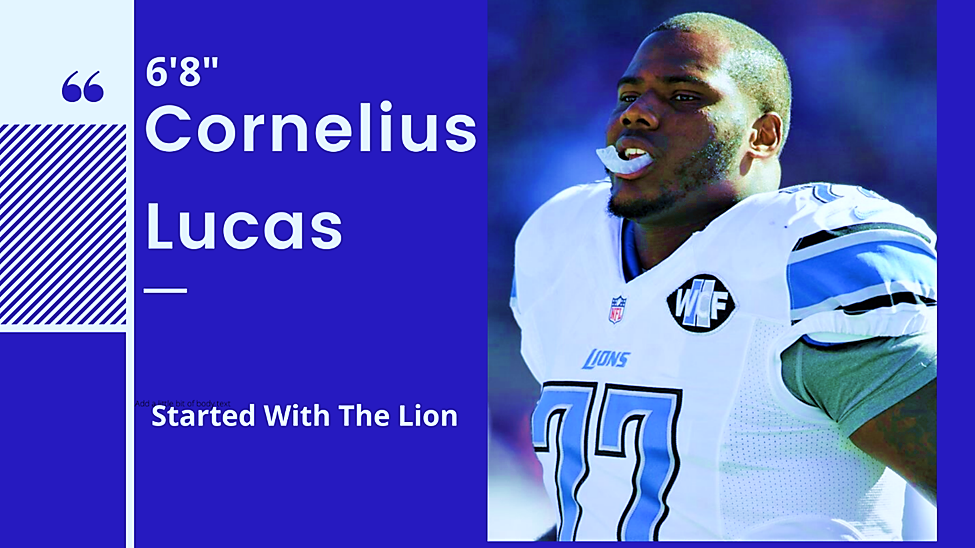 Cornelius Lucas is a 28-year old offensive tackle currently playing for Chicago Bears. He was the tallest NFL player to play for Detroit Lions when he started his NFL career. He played college football at Kansas State University.

In 2013, he earned the Wildcats their first bowl victory in 11 years. Before that, he played for Edna Karr high school and won consecutive district championships in 2007 and 2008. His massive size helped him become a smart offensive tackle.

He was an undrafted free agent before signing up for the Detroit Lions in 2014. He played 35 games for the Lions in 3 seasons and started 6 games. In 2017, Lucas signed a contract with the Los Angeles Rams. He played and started 1 game for the Rams before being released in 2018.

In December 2018, he was picked by the New Orleans Saints and was released immediately after. He was then resigned by the Saints and he played 1 game for them. Eventually, he was released again and was signed by the Chicago Bears in 2019. Here, he’s having a fair game time. Throughout the whole career, he has started 16 games out of 53 appearances. 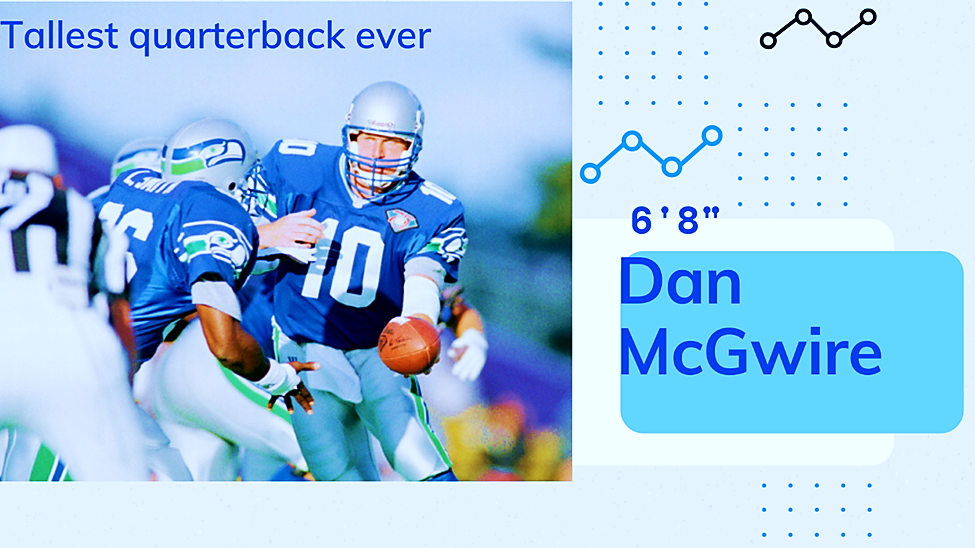 Although people may not consider Dan McGwire alongside the greatest quarterbacks, but he’ll be remembered as the tallest player in NFL history to play at the position. He played college football for the University of Iowa for two seasons and later was transferred to San Diego State University. There, he was honored First-Team All-Conference, Offensive Team Captain and won the MVP award as a Senior.

Dan was number 1 in Adjusted Passing Yards Per Attempt in 1990 by WAC. He was already well-known as the younger brother of baseball superstar Mark McGwire. He was drafted by the Seattle Seahawks in the 1991 draft as a 16th pick. His high school and college stats were good enough to push the Seahawks to have high expectations from him.

In his first three seasons, Dan showed underwhelming performance which made him stay on the bench for most of the games. In 1994, he played 7 games for the Seahawks and had 9 fumbles. After playing only 12 games in 4 seasons, the Seahawks let McGwire go.

Then, he went to play for the Miami Dolphins in 1995. He failed to show his talent there too and retired from the game. He has an overall 74-148 passing and 2 touchdowns in his NFL career. Dan McGwire is the president of an enhanced water company now. 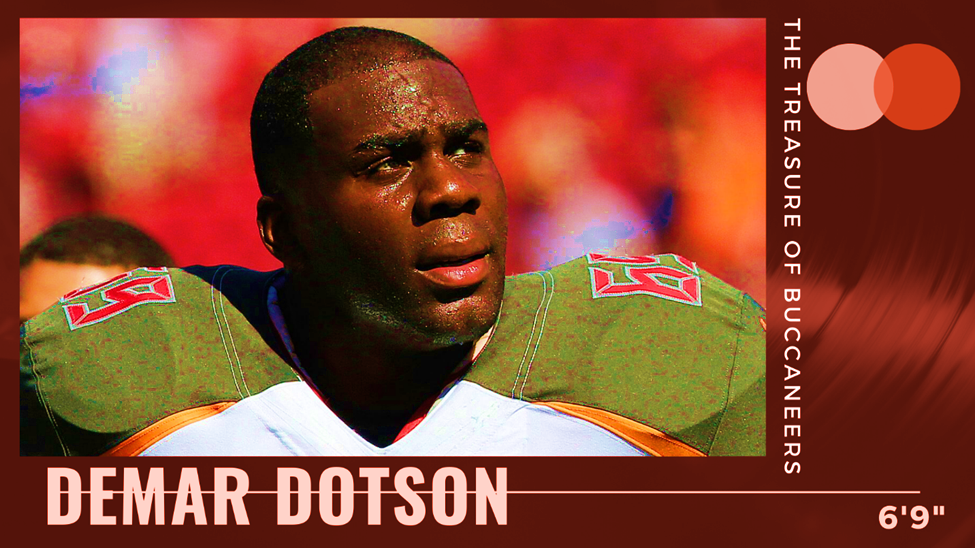 In 2012, he helped block Doug Martin’s 251-yard rushing game against Oakland, the highest in the team’s history and tied for the 10th-most in NFL history. He moved from the right to the left tackle position in 2014. He was an essential part of an offensive line that digested only 27 sacks in 2015, the third-fewest by a Buccaneers team.

In 2015, his unit helped the offense to a record 6,014 net yards and also 2,162 rushing yards for the second-most in a season in Buccaneers’ history. He was ranked third in yards per game and fourth in yards per play in 2018.

Dotson started 91 games out of 115 games in his career, all with the Buccaneers. He is currently the player with the longest tenure for the Buccaneers. Demar is a sponsor for several charitable programs. 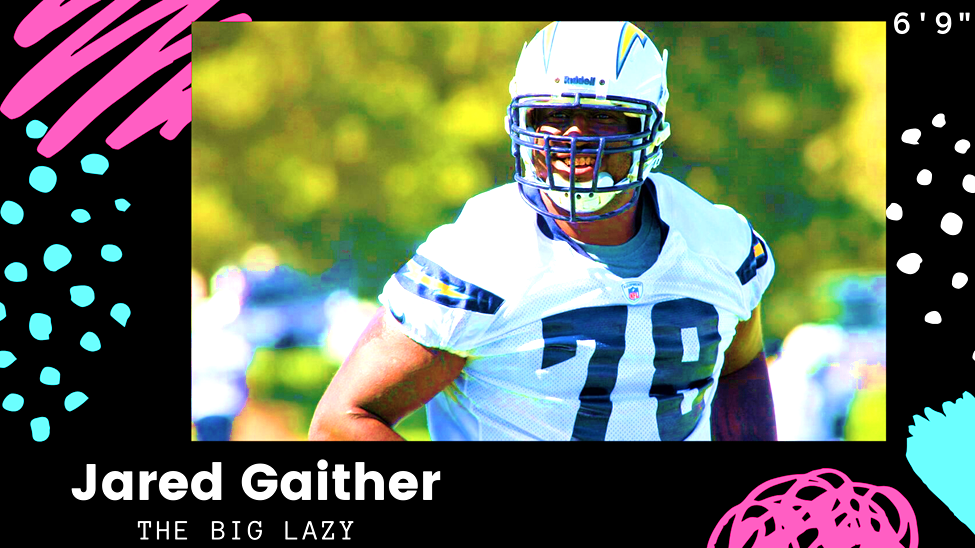 Jared Gaither is a former offensive tackle who was drafted by the Baltimore Ravens in the 5th round of the 2007 season. Gaither is one of the tallest players to have played in NFL who started playing football at Hargrave Military Academy after playing for Eleanor Roosevelt High School for three years.

Jared played varsity football at the University of Maryland and was named a third-team Freshman All-American honors and also got an honorable mention by The Sporting News in 2005. He was on the watch list for the Outland Trophy in 2006 and ranked No 7 among offensive tackles in the whole country.

Gaither started his NFL career with the Baltimore Ravens in 2007 by replacing Jonathan Ogden after his retirement. In the 2008 season, his role was instrumental to the progress of Baltimore’s offensive line. He missed all the games in 2010 after an injury.

In 2011, he signed with Kansas City Chiefs but did not start a single game for them. Then, he was waived by the San Diego Chargers and earned the name ‘Big Lazy’ because of his lack of practice time. Eventually, he was released in 2013. In his career, Gaither started 37 out of 52 games. 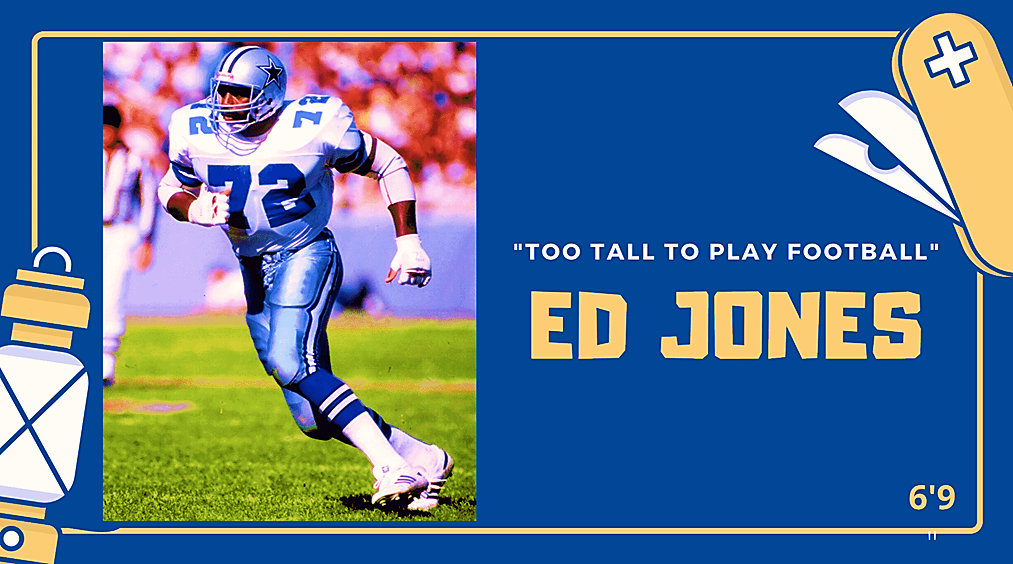 Ed Jones was born on February 26, 1950. He was the former defensive back for the team Edmonton Eskimos. A large number of times the Geico commercial played on TV about Ed “Too Tall” Jones and that’s true.

Ed Jones is incredibly tall and giant for the other defensive linemen in the history of NFL. He played for Dallas Cowboy for 15 seasons, being the first-round draft pick and left it in 1997. He was elected to the black college football hall of fame. He had the win against Denver Broncos in the Super Bowl XII.

Ed spent his childhood in Middletown Township, New Jersey. He didn’t play composed football until he attended Middletown Township High School in Navesink, New Jersey. After leaving the team, he tried to build his career in pro boxing. He used to play college basketball at Tennessee State University. There he met the teammate who started describing him to be “too tall to play football and fit in clothes”. 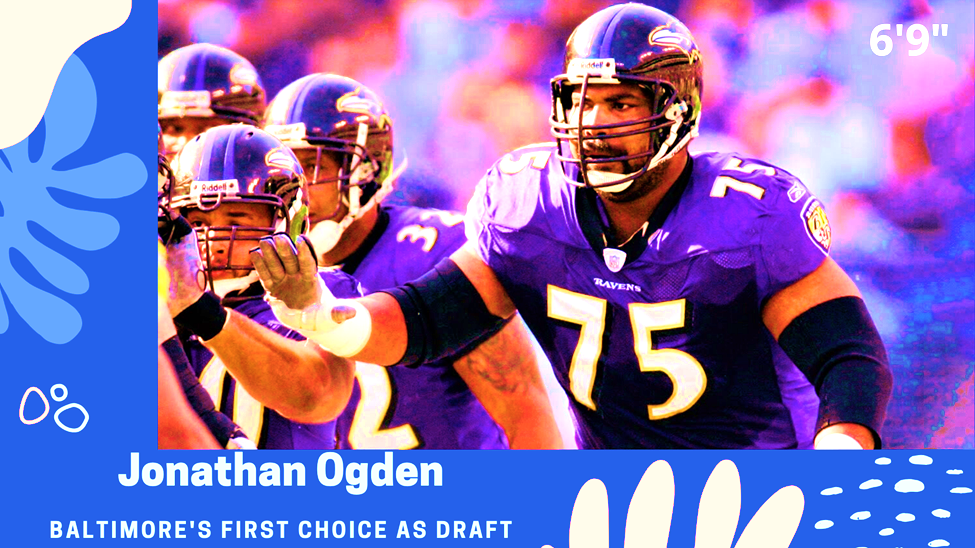 This is the very first player who got drafted by Ravens. There are many tallest players in the national football and Jonathan Philip Odgen is one of them. He played his whole career with Baltimore Ravens. He was a former professional offensive tackle. He used to play for the UCLA Bruins and known as a unanimous All-American.

In 1996, for the very first time, Baltimore Raven chose him as their draft pick. In 2011 when Baltimore Ravens beat New York Giants at Super Bowl XXXV, Ogden won a Super Bowl ring. He used to be known as the brick wall as he was a very good player.

Ogden was an 11-time Pro Bowl selection in 12 seasons and 9-time All-pro. In 2012, he got enlisted into the College Football Hall of Fame. He allowed only two sacks in 23 games during his junior and senior years. He got the Morris Trophy and Outland trophy back in 1995.

In 2013, he got voted into the Pro Football Hall of Fame. After the season of 2007, he had to retire because of some issues in his toes and knees. In 2008, he got inducted in the Raven Ring of honor. Apple Ford signed him for many commercials that sell used cars. 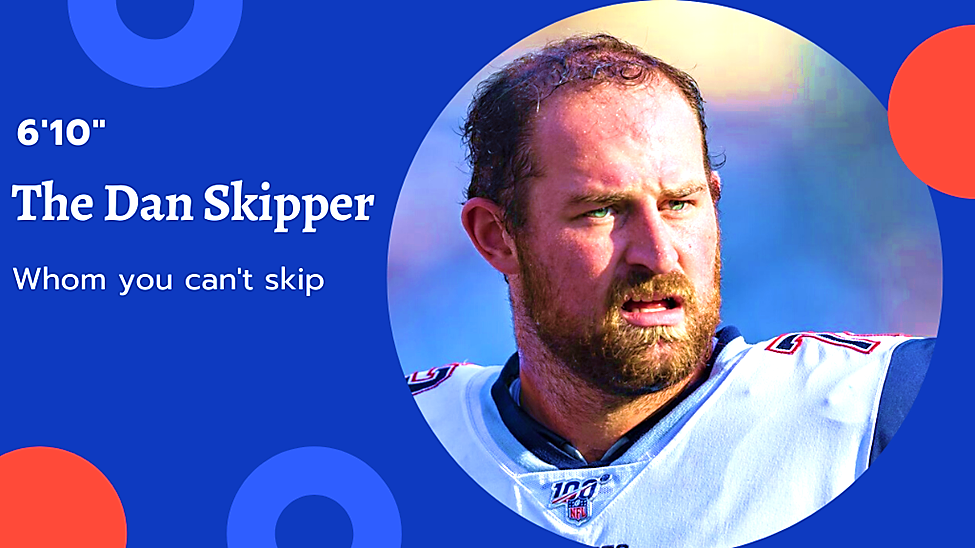 Third among the tallest NFL players, Dan Skipper used to play college football at the University of Arkansas. While he played at Ralston Valley High School, as a senior, he achieved 5A all-state honor. In 2007, Dallas Cowboy marked him at first as a free rookie agent. Skipper is the first among Arkansas players to be achieve an All-America status.

Dan began the 13 games of the season and obtained an Associated Press All-SEC noteworthy mention as a sophomore. He started the 13 games and the name was ESPN’s All-SEC group. He created the All-SEC group of ESPN’s, Phil Steele, Athlon Sports, Lindy’s Clowns, Sporting News, and the Coaches Poll as a senior.

During the 2017 NFL Draft, Skipper went undrafted. Because of chronic blood conditions, he went undrafted and, they found it during the prospect evaluation. He got the invitation as a tryout participant to visit the rookie minicamp of Dallas Cowboy. They signed him as the undrafted free agent in 2017, May 16th. 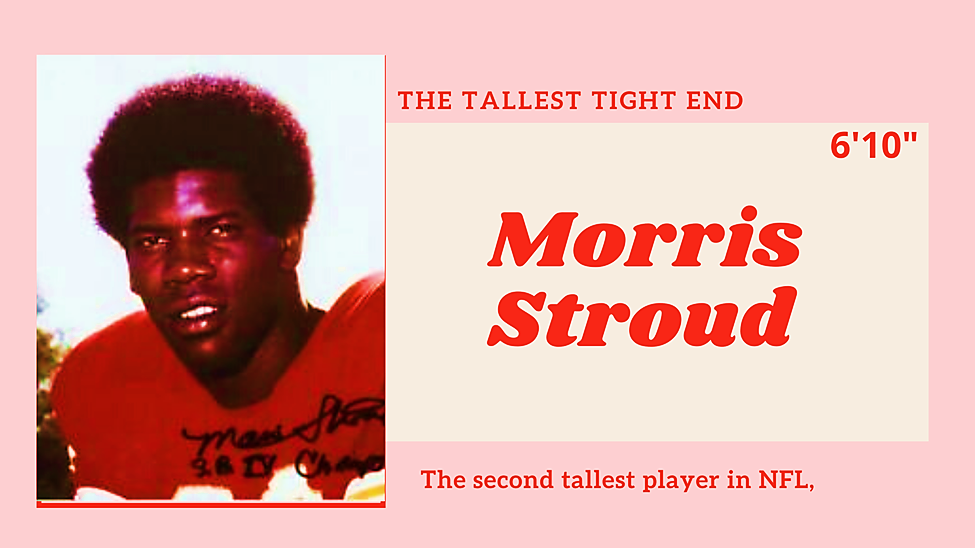 Morris Stroud is considered the second tallest player in NFL at all positions. He was born in Miami, Florida on May 17th, 1946. He used to play for the Kansa City Chiefs as a tight end. In 1969, he didn’t make it to the regular seasons but used to be on the roaster for AFL Championship Game.

Morris also played on the Panthers’ basketball team as a center and power forward. The head coach of Chiefs chosen him as a tight end for the third round of 1969 NFL draft though he did not have much experience on the gridiron. During his time with the Chiefs from 1969-1974, Stroud came into actions in the 1970 season.

Morris played 69 games. He caught 54 passes in his career for 977 yards and seven touchdowns. As far as blocking field goals matters, he went onto become a prominent special teams player. So, undoubtedly, he was a very potential player with great physique and skill. He was married and his wife’s name was Dorothy Ponder. In 2016, October 17th, he died in Kansas City, Missouri, USA.

1. Richard Sligh – The Tallest Player in the NFL 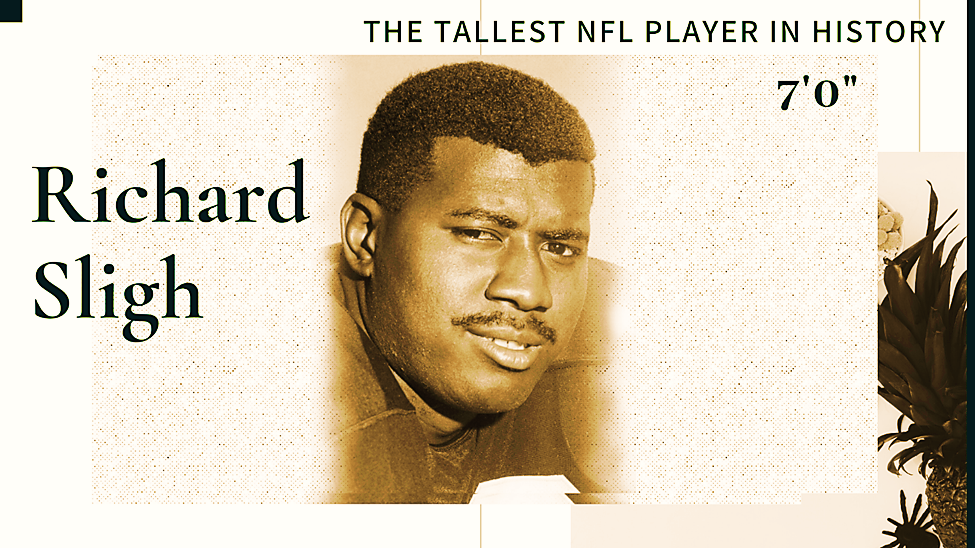 From 1962-1966, he was having a major in Biology and minor in Chemistry. In the 1967 NFL/AFL draft, he got picked in the 10th round as a defensive tackle. Playing only one season, he won the AFL title that year. He played a total of eight games during his time in the league.

Cincinnati Bengals chose to pick him up in 1968, in the AFL allocation draft. On the Raiders’ Super Bowl 2 roster, he used to be on the reserve list. He faced some BIG guns, such as Preston Pearson, Leroy Mitchell, Randy Rasmussen, and the likes of them.

Sligh’s exceptionally tall height is the reason why everyone knows him in this way despite playing for a very short time. In 2008 December 23rd, he passed away in Roxboro, North Carolina. He died at the age of 64.

Height is one of the few attributes that NFL fans find interesting about the players. Thus, the question of the tallest NFL player ever is asked so frequently. Hopefully, you’ve already had all the answers with appropriate details.

Explore our website for more interesting facts and statistics about your favorite NFL stars and teams! Write to us if any question comes up. We promise we’ll get you the answer!