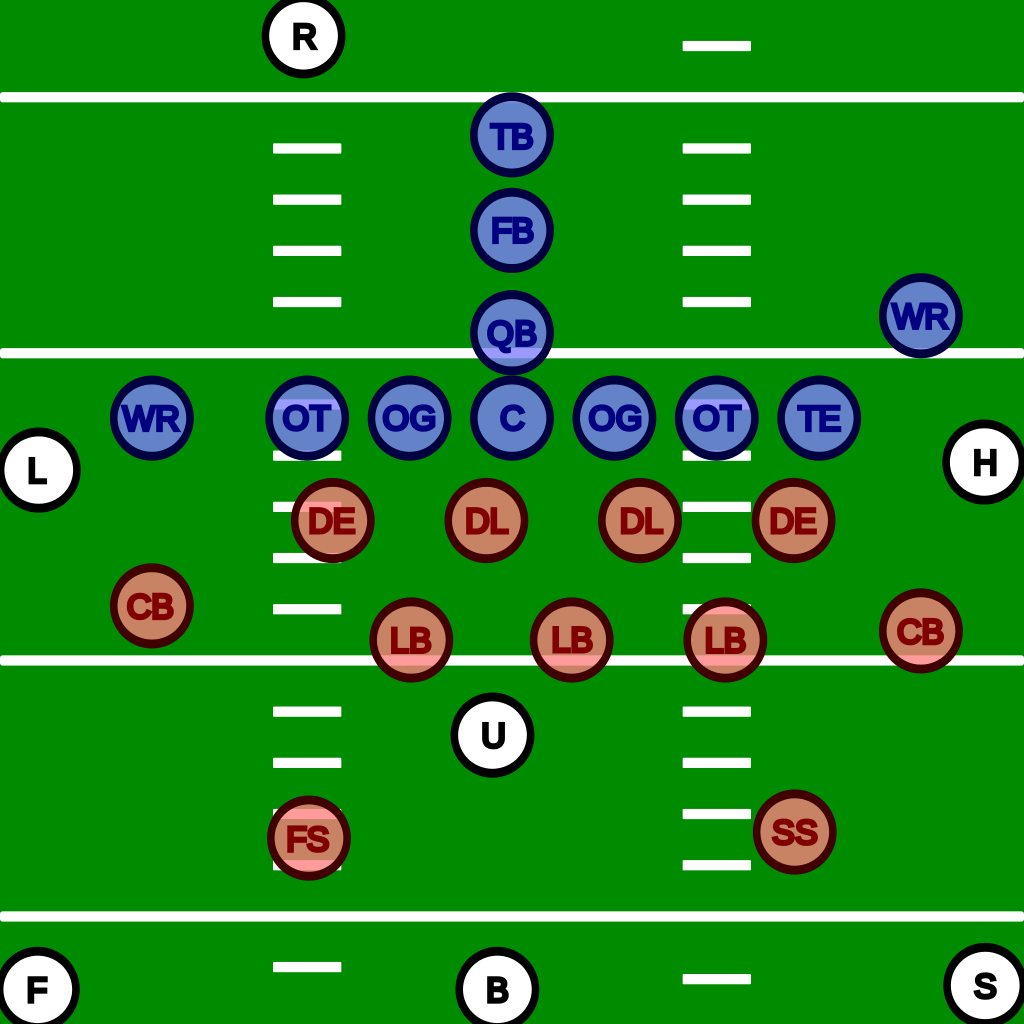 American Football is a difficult sport to understand for people that neither watched nor played while growing up. Honestly, positions in football might be a tough nut to crack, but this article would help make that easier.

To go pro, blocking and tackling should be your area of specialization. These two are the top things a footballer needs. However, the team is divided into offense and defense.
The world of sports is evolving, and so is the game. Player positions do not have much similarities like before. Now, you need strength, speed and size to play the game. All football positions has its own role at separate times while in play.

Usually, a team cannot field more than 11 players at once. While a team is attacking, 7 players would line against the scrimmage line while the remaining four would be stationed at their back.

The offensive team ensures the ball is safely delivered downfield to score a touchdown. All offensive positions have vital roles, which requires a special skill set. Football players are now more athletic and this is part of what they must possess.

For the play to begin, the centre snaps the ball to the quarterback. This is where the offense starts.

Usually the five offensive men in most formations usually includes; a center who starts play, two guards and two tackles so. Their role is just to block for the quarterback or whoever is with the ball. These players require size, and they are usually the biggest and strongest on the team. They have a very important role to play, and that is because it determines whether their team would win or lose the game.

Offensive positions and their Roles: 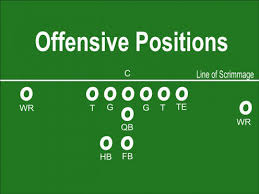 Center: The game starts with this player here. He is usually found in the middle. He leads the offense and also has to call the play so all other offensive players would know what they ought to do. The center is usually in charge of blocking the defensive nose tackle.

Guard: A team can field two guards unlike the center. They line up on both sides of the center. Over time, guards have been the best offensive players. Now, everyone is the best collectively. Guards have to be quick and fast regardless of their size. They usually run the farthest when the game is in play.

Tackle: Like guards, there are also two tackles. Tackles have to block defensive ends and linebackers that are very fast. They have a very key role to play. Though the quarterback usually hugs all the glory, but a football team with an amazing offensive tackle would make a lot of difference.
Quarterback
This is usually the recipient of the ball once the center puts the ball in play. This position requires arm strength for him to throw the ball and he must also have leadership qualities to control the offense. There are quarterbacks that are great at running with the ball, but this is not a necessary attribute.
Depending on the play, the quarterback is usually found beyond the center for when the play starts. He can stand close to easily receive the tap from the center and he can also stand back over some few yards, and the center would still pass the ball to him.
Different things are expected of the quarterback. Their roles depend on the game plan and special attributes of the player. He has to lead the team and also guide them to the end of the field. There are quarterbacks that pass well, some have pace. However, the sport involves passes so teams usually prefer quarterbacks that can throw the ball well.
Running Back
These set of players come in different shapes and sizes. There are some that are huge, while there are smaller running backs also. Some do not even touch the ball. When it comes to football position, running backs have an important role to play.
They can be found in the backfield when checking the line up. However they do not always stay back, most times they flank wide and run to help catch passes just like the wide receiver.

Before, the running back had to run with the ball and cover as much length of the field as possible. However, things have changed recently because the running back needs to receive passes well and also block linebackers in the modern day football.
There are different running backs and they all have their special duties.

Fullback: The duty of this player is to block. Your average fullback is usually strong and well built. They need the strength and body mass to bring down defenders while on offense. The fullback has the job of helping the halfback clear the road while the halfback gets the ball.

Halfback: Most times, when you see a player running with the ball a lot, he is most likely the halfback. They run with the ball most throughout the game. There are small halfbacks that are fast and can easily feign their way out of an incoming defender’s tackle. While some are large and can bash into defenders instead of running around them. They don’t have long lasting careers because of the body contact they take.

Wide Receiver
The players in this position are usually the fastest on the field. Their agility, speed needs to be top notch, so they would be able to feign defenders trying to tackle them, and also receive the ball well.

There are three types of wide receiver, and what they are called depends on where they are lined up on the field.

Split end: These receivers can be found on the line of scrimmage. They are part of the 7 man offense on the line. They can also receive passes due to the fact that they are on the end of the line.

Flanker: They also flank out wide, but they are usually a step behind the split end. You can easily spot them in the backfield.
Slot Receivers: This football position derives the name from being put in between the line and a wide receiver. Relying on the formation, they can be found on or off the line. There are formations were the two wide receivers are on the same side, the flanker then has to line up in the slot position.

Kicker
The player in this position doesn’t have to run around or make any tackles. His special feature is the leg power. The kicker has to just kick the ball like the name implies. However, this job is really important because some games are usually decided by the kicking prowess of this player. The kicker can be found in the backfield when kicking a field goal or extra points. Apart from this, he plays no other position. 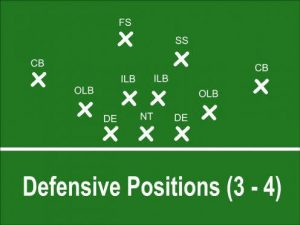 Just like the saying goes, the best offence is great defence. The defensive players have to stop their opponents from scoring points through a touchdown, and this is usually done in several ways.

This is sometimes a difficult task, because players have now become more athletic and difficult to stop. To be a successful defensive player, intelligence is a key factor. Though the power, strength and speed also come in handy.

There are eleven defensive players, and they can line up anywhere apart from across the scrimmage line. The major defensive ploys used by most teams is usually the 4-3 or the 3-4. Which means four defensive line men and three line backers for the 4-3 defence and the opposite for 3-4.
On defence, there are three major positions. There are differences with each position, the bigger guys are in front, and the smaller defenders follow.

Defensive Linemen
These are the first set of defenders opposing players would have to outmanoeuvre. Their roles and positions depends on the type of defence they play. The players are lined directly across the Offensive players. Players that play defence with their hands on the ground are the defensive linemen

Defensive tackles: In a 4-3 set formation, there are two tackles. They have a basic position, and that is across the opposing guard. All defensive players usually move around in different positions, but in the same area. The objective is to prevent their opponents from running the ball and scoring a touchdown. They can also rush down the quarterback. There are defensive tackles that can take on several blockers at once and then they jam up the middle and stop the offensive tackles off the inside linebackers.

Nose tackle: When a 3-4 formation is set up, there would be just one defensive tackle in the middle. He usually gets bashed from both sides by the offense to take him out. However, it’s the job of the player to stand his ground and remain a formidable threat for his team.

Defensive end: The players in this position are lined outside the defensive tackles. Strength and pace is a requirement for this role, because there is usually a battle against opposing linemen. The pace helps cover quarterbacks when they are in play. In a 3-4 formation, the defensive end usually stays closer to the mid line. While for a 4-3 defence strategy, they are usually outside the offensive tackles.

Linebackers
These are the all-rounders on the field. They also have to do a lot such as halting an offensive run, chasing down an offensive quarterback and also covering wide receivers on their opponents team. Usually, their roles are usually determined by the position and defensive plays.

The players on this position are lined up behind the defensive line. The specific location depends on the skills, position and roles of the player in that football position.
There are different types of linebackers, and the only difference is where they play, which is either inside, middle or outside. The players in these positions are called; inside linebacker, middle linebacker, outside linebacker.

Defensive backs
This is the last defence opposing team would need to encounter before scoring a touchdown. They are strong, tough and athletic. Where they play is often determined by their position and the defensive play of their team.
Also, just like the linebacker, there are different types of defensive backs, and they include: strong safety, free safety, corner and nickel back.

Punter
Just like the name implies, the punter is a professional at punting downs. This player can be found in the backfield, and he has to receive a snap before punting the football. His duty is to punt the ball on fourth down, he pins the defence away from the goal line. Qualities of a good punter includes; Strong legs and accuracy.

There are some positions that might be noticed while watching a game. These positions are usually played by athletes that have another role or position. Such positions are;
Kick Returner and Punt Returner: Like the name implies, the kick Returner has to catch and return kickoffs, while the punt returner catches and returns punts also. To play this football position, the player needs to react well under pressure, receive passes and also run with the ball.

LongSnapper: When punting down, these players take the position of a center. Previously, the center plays this position but in the modern day football, there are specialist at doing this, and they are called the long snapper.

The Highest Paid NFL Coaches and their wage justification