The 10 most controversial calls in NFL history 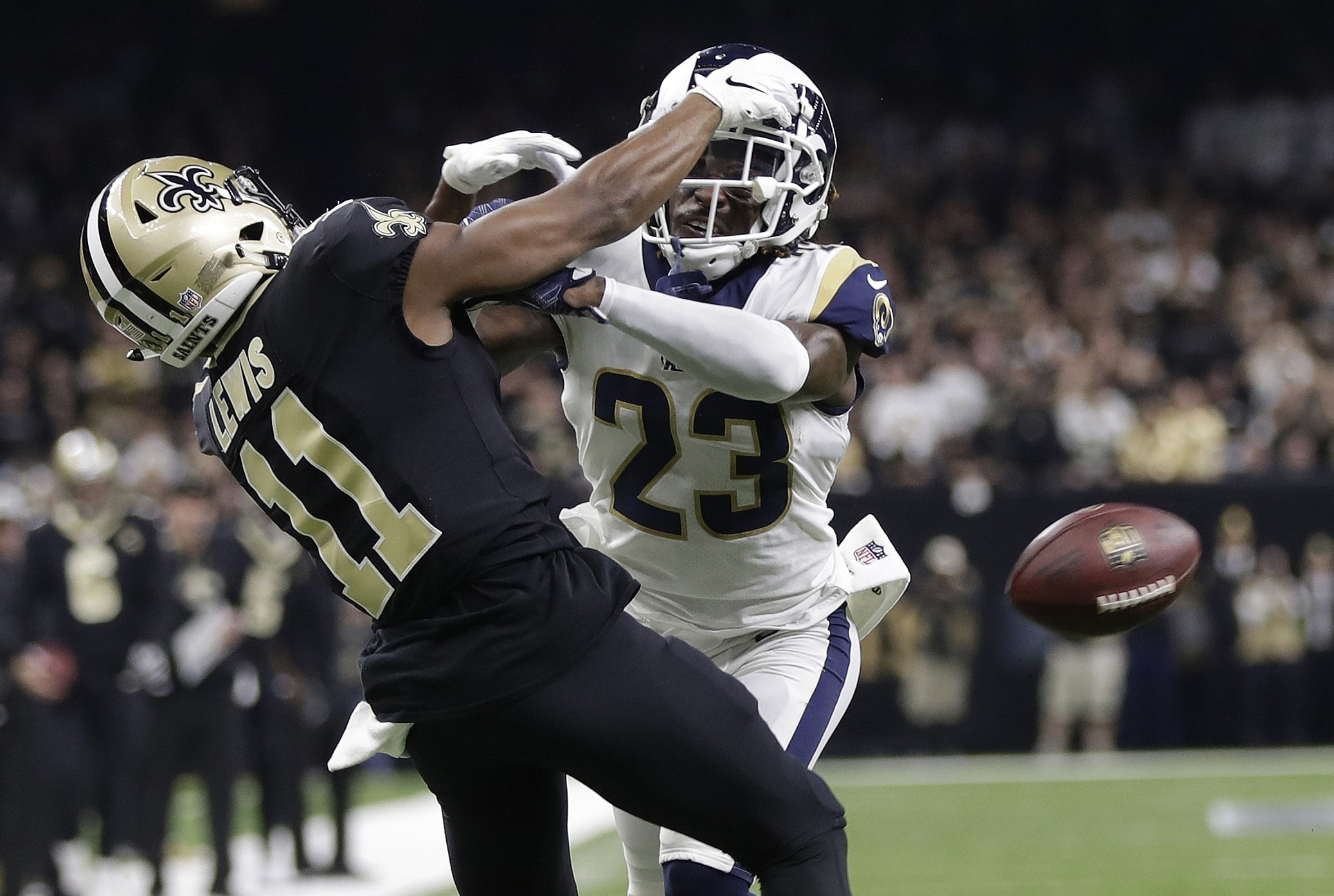 The NFL, in its 100-year history, has witnessed plenty of controversial refereeing decisions. From missed pass interference to botched fumble calls and much more, referees have found ways to interfere in games and change their outcome.

Many of the mistakes have also resulted in rule changes in due course and this has benefited the league as a whole.

On that note, here we take a look at the 10 most controversial calls in NFL history:

Pass interference calls are notoriously hard to make due to a variety of factors that have to be taken into account. However, the missed call in the 2002 Wild Card game remains one of the most controversial and hotly debated topics till date.

The San Francisco 49ers were taking on the New York Giants and had rallied from an incredible 24-point deficit to take a 39-38 lead with a minute to play.

The Giants were reeling but they still had the ball and under a minute to get into field goal range. They managed just that but a botched snap meant they couldn’t kick the field goal.

Instead, holder Matt Allen caught the ball, looked downfield and threw it to offensive guard Rich Seubert, who ended up being tackled on the play in a classic case of defensive pass interference.

However, rather than call the interference, the referees claimed that Seubert was an ineligible receiver which meant the pass was incomplete, sealing the victory for the 49ers.

This could easily have a case for being much higher on the list considering the sheer incompetence of the referees in the game.

The official referees were absent due to a labor dispute which meant there were a handful of replacement referees who were called up to officiate a Monday Night Football game between the Seattle Seahawks and the Green Bay Packers.

The Seahawks were trailing when rookie quarterback Russell Wilson decided to launch a Hail Mary into the end zone just as time expired.

While it appeared as though the Packers’ defensive back M.D. Jennings had come down with the ball, in reality, Seahawks receiver Golden Tate had also managed to get his hand on the ball, meaning the two players came down with it at the same time.

To make matters worse, one official ruled it as a touchdown while the other did not. Eventually, the touchdown was awarded and Seattle walked away with a narrow win.

However, it was revealed after the game that offensive pass interference should have been called on Golden Tate which would have negated the catch and ensured a Green Bay victory.

Following this disastrous officiating display, the regular referees were recalled to work within three days.

#8. Helmet mistaken for the football

The December 1998 game between the New York Jets and Seattle Seahawks had a little bit of everything going on.

The game itself wasn’t particularly eventful, at least until the closing stages when the Jets produced a long drive in search of a game-winning score.

With the ball placed on the Seattle five-yard line and the Jets facing a fourth down, quarterback Vinny Testaverde decided to rush into the end zone himself.

It proved to be a disastrous play as Testaverde failed to get across the line, however, the officials mistook his helmet for the football and awarded the Jets a touchdown.

At the time, there was no luxury of instant replay so the call stood and the Jets were handed the victory. However, after the game, Seahawks head coach Dennis Erickson revealed that the NFL officials had contacted him and admitted that they believed Testaverde’s helmet was the football, which is why they awarded the touchdown.

Following the controversial call, the replay system was re-introduced the following year. 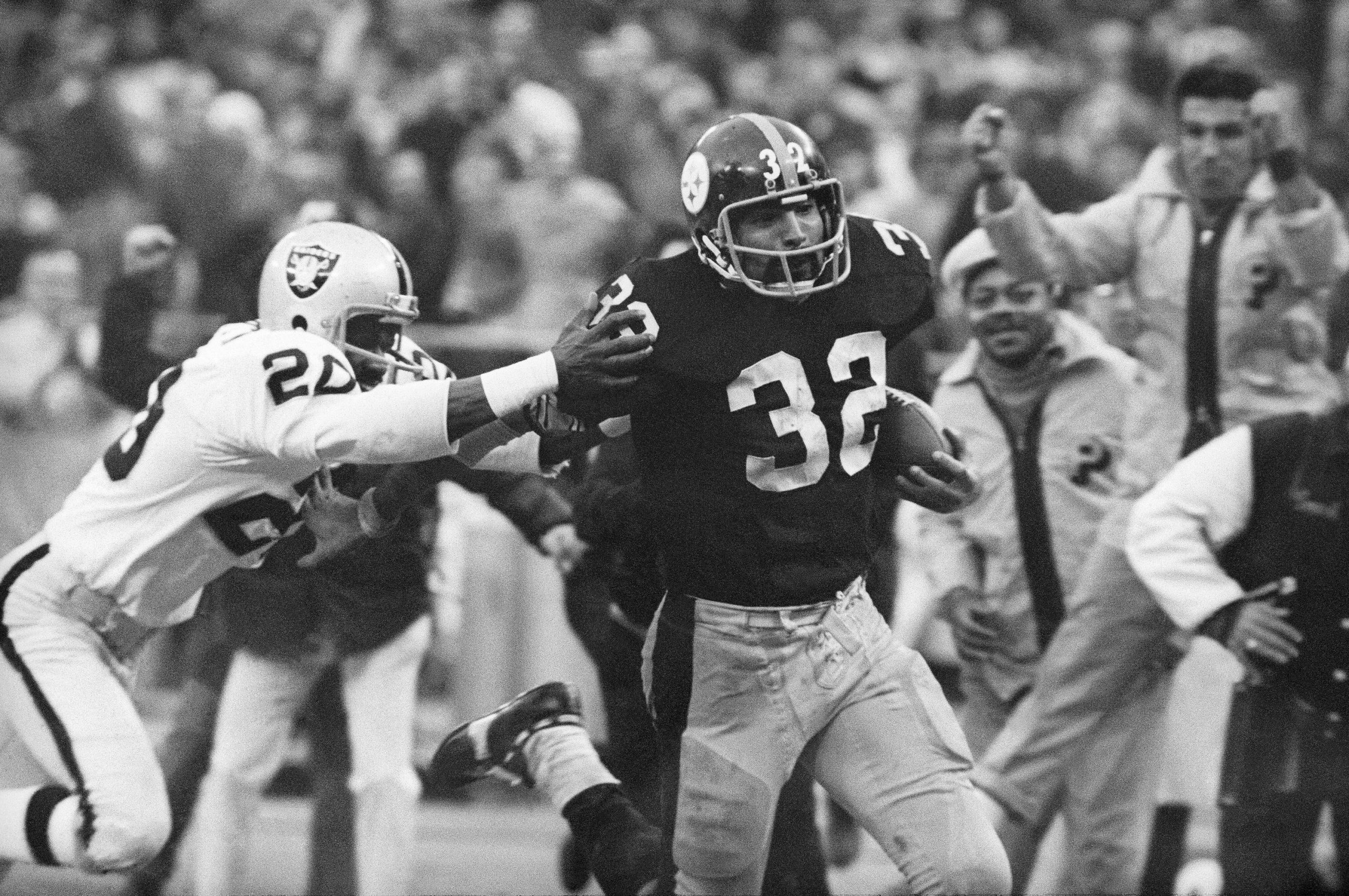 A hard-fought 1972 AFC divisional playoff game between the Oakland Raiders and Pittsburgh Steelers went down to the wire.

The Steelers trailed the Raiders by a single point, 7-6 and had less than a minute to mount a comeback. With just 22 seconds left on the clock, the Steelers were in deep trouble with a fourth-and-10 situation from their own half.

The game looked to be all but over when Steelers quarterback Terry Bradshaw’s pass, which was intended for Frenchy Fuqua, was batted away. However, Franco Harris managed to get to the ball after a deflection and in a wild series of events, ran into the end zone for the touchdown.

While this doesn’t seem too controversial on face value, it is to be noted that had the ball come off a Steeler player, the touchdown would have been deemed illegal due to a double offensive touch. However, if the ball had come off a Raider, the score would have counted.

Till date, the debate has raged on as to what exactly caused the deflection and how Harris ended up with possession. 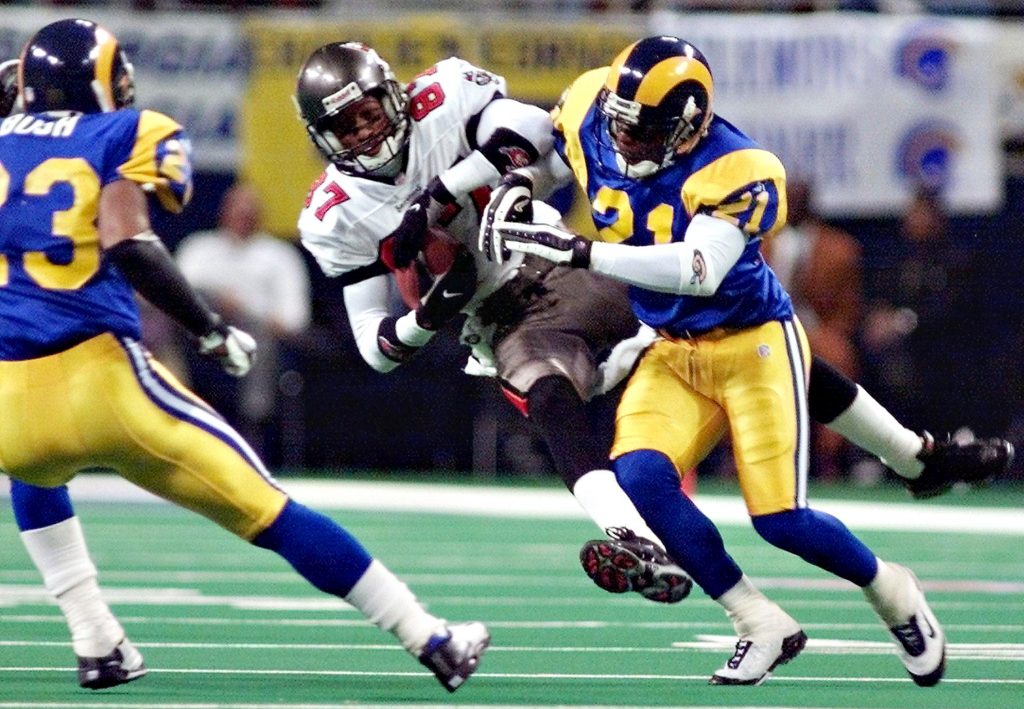 A call so controversial it resulted in a massive overhauling of the rules at the time. During the 1999 NFC Championship Game between the Tampa Bay Buccaneers and the St. Louis Rams, the Bucs were trailing late in the contest.

However, they were in position to strike and when Bert Emanuel made a 13-yard touchdown catch, Tampa believed they had taken the lead for good and booked their berth in the Super Bowl.

Much to their dismay, it appeared that the nose of the football had touched the ground during the process of Emanuel’s catch. Despite Emanuel having complete control of the ball while falling to the ground, it was ruled an incomplete pass after review and Tampa would go on to lose the contest.

In order to truly define what constituted a catch, the Bert Emanuel rule was developed and used till this date. 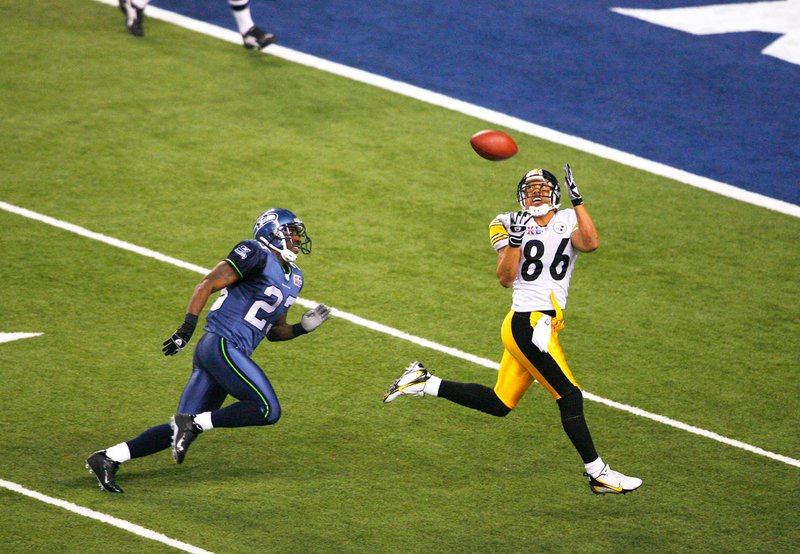 The Seattle Seahawks and the Pittsburgh Steelers entered Super Bowl XL as two of the best teams in the NFL. Many believed the battle between the two powerhouses would be one for the ages. However, shocking refereeing calls marred the game, costing Seattle a shot at history.

The refs, in fact, missed so many calls throughout the game that fans and experts believed Seattle would have walked away comfortable winners had they not been robbed by poor decisions.

Referee Bill Leavy went on to admit that the referees missed multiple calls over the course of the game which definitely had a bearing on the result.

“It was a tough thing for me. I kicked two calls in the fourth quarter and I impacted the game and as an official, you never want to do that. It left me with a lot of sleepless nights. I think about it constantly. I’ll go to my grave wishing that I’d been better. I know that I did my best at that time, but it wasn’t good enough.

“When we make mistakes, you’ve got to step up and own them. It’s something that all officials have to deal with, but unfortunately, when you have to deal with it in the Super Bowl, it’s difficult.”

Controversy erupted during the American Football Conference (AFC) Wild Card playoff game between the Tennessee Titans and Buffalo Bills in 2000.

The Bills had edged into a 16-15 lead after kicking a field goal and with just 16 seconds left to play, a victory seemed all but assured.

However, the Titans were not willing to throw in the towel and from the kickoff, tight end Frank Wycheck threw a lateral pass across the field to Kevin Dyson.

Dyson then raced away into Bills territory and continued uninterrupted to the end zone, scoring a 75-yard touchdown and sealing a 22-16 victory for the Titans.

Referee Phil Luckett then ordered a review of the play to ensure that the pass to Dyson was indeed a lateral and not an illegal forward pass, which would have killed the play.

Eventually, the touchdown stood and the Bills were left shellshocked with what had just transpired.

#3. Mike Renfro out of bounds

The Pittsburgh Steelers have benefitted from a lot of controversial calls over the years, and none more so than during the AFC Championship game against the Houston Oilers in 1979.

The Steelers led by a touchdown but the Oilers were close to leveling the score with a good drive of their own. Mike Renfro then produced a remarkable catch near the sidelines for the game-tying touchdown, but the referees on the field claimed an incomplete pass as they believed he didn’t have both feet inbounds when making the catch.

Replays indicated that Renfro was robbed of the touchdown but since plays were not reviewable at the time, the Oilers had to accept the call, which is widely believed to be among the worst in NFL history.

The Steelers would go on to win the contest 27-13.

The New Orleans Saints and Los Angeles Rams squared off in the 2019 NFC Championship game in what was billed as a battle of the heavyweights.

Both teams traded blows over the course of the game and with the scores tied at 20-20, the Saints found themselves deep in Rams territory with just over a minute left to play.

With the Saints at third and 10, quarterback Drew Brees unleashed a ball towards the sideline intended for his receiver Tommylee Lewis.

However, Nickell Robey-Coleman charged in and slammed into Lewis well before the ball had arrived, a clear case of defensive pass interference.

The referees though missed the incident completely which forced the Saints to kick a field goal rather than attempt a one-yard touchdown run.

The Rams would go on to level the scores through a field goal of their own before winning the game in overtime and setting up a date with New England in the Super Bowl.

The Saints were livid with the referees in the aftermath of the game and plenty of lawsuits were filed against the officials and the league.

The missed call also brought about a couple of rule changes in the NFL, with the league putting into place a structure to review pass interference calls from the following season.

Easily the most debated and controversial ruling in NFL history came during a playoff game between the Oakland Raiders and New England Patriots way back in 2001.

The Raiders were hot favourites considering the fact that the Patriots had lost their starting quarterback to an injury. This meant the unheralded Tom Brady was tasked with leading the most unlikely of New England fightbacks.

Into the fourth quarter and the Raiders looked to have command of the game. They led 13-10 and their stifling pass rush had just forced Brady to fumble the ball which they went on to recover.

However, after reviewing the play, the call on the field was overturned into an incomplete pass as the referees believed that Brady was moving his hand forward when the ball was knocked out.

“When [an offensive] player is holding the ball to pass it forward, any intentional forward movement of his arm starts a forward pass, even if the player loses possession of the ball as he is attempting to tuck it back toward his body. Also, if the player has tucked the ball into his body and then loses possession, it is a fumble.”

The debate over whether Brady had tucked the ball into his body or whether he was still in the process of bringing it back continues till date.

Either way, the ruling favoured the Patriots, who went on to level the game via an Adam Vinatieri field goal before securing the win in overtime.

New England would then go on to defeat the St. Louis Rams in the Super Bowl to win their first-ever title and kickstart an era of unprecedented dominance.