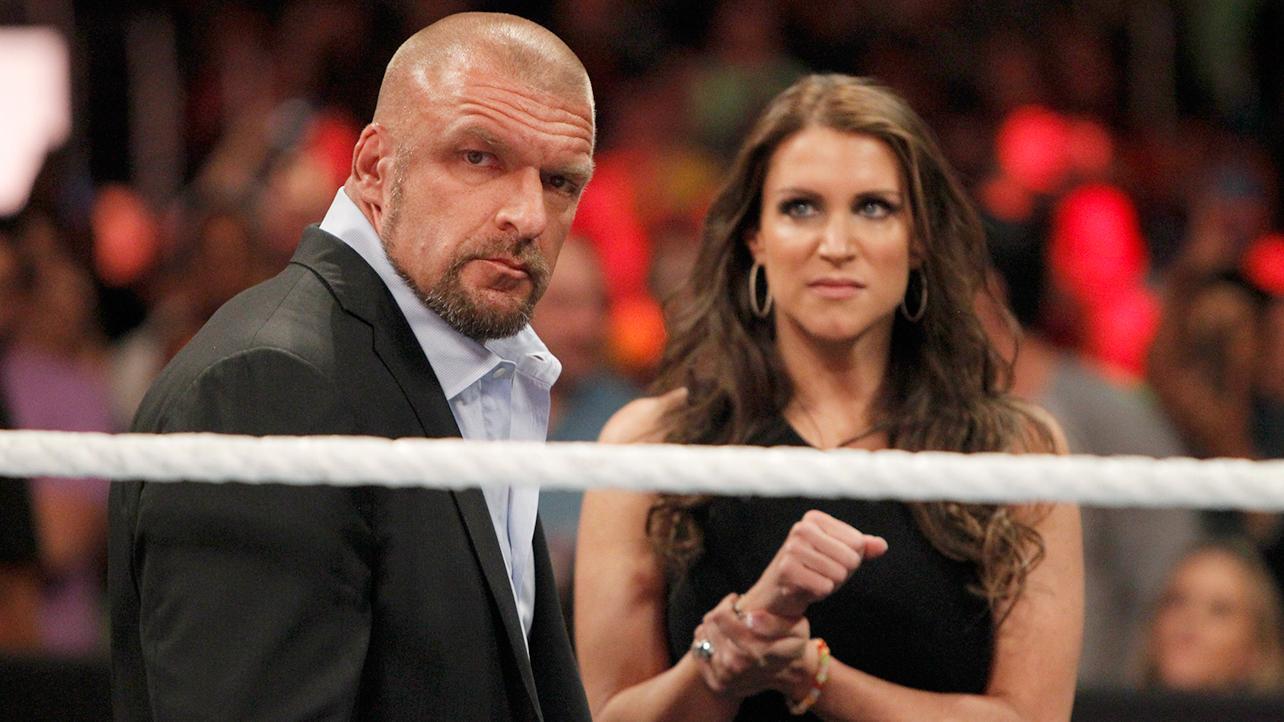 WWE superstars work closely together behind the scenes that sometimes, form a real-life connection between them. Because they don’t get enough time to manifest a relationship outside their circle, they often date fellow wrestlers. Many have even gone on for years before splitting up. One of the most popular WWE couples to break up was John Cena and Nikki Bella, who called of their wedding a month before its planned date.

On the other hand, some wrestling couples are still going strong and have become an example for others that true love can be found inside WWE too. The following is a list of 10 WWE couples who are very happy with their relationship. We have also mentioned the names of wrestlers who no longer work for WWE, but once used to do so and have also considered factors such as how long they have been married and if things went wrong between them.

Rusev and Lana don’t seem to appear on good terms on WWE Television, as The Ravishing Russian has filed for a divorce. However, keeping the storyline out of real-life, everything is fine between Rusev and Lana.

Just like a few other couples in this list, their relationship took off with a storyline where they worked together. It turned out well for them, as Rusev and Lana are now married for over 3 years.

But it wouldn’t have been possible without Dustin Rhodes, who was their trainer. He was the one who suggested that Lana should work with Rusev since she was already fluent in speaking Russian. They started sharing more and more time together and without even knowing were in love with each other.

“Slowly from just talking on purely wrestling topics, by spending more time together, love happened,” Rusev once said while discussing his relationship with Lana.

Jimmy Uso and Naomi are married with two children, Jayla and Jaidan, both from Jimmy’s previous marriage. They married in 2014, and their wedding was featured on Total Divas as well.

However, since tiding knots, they haven’t been featured on the reality-show prominently. Jimmy works as a tag team wrestler in WWE with his brother, Jey Uso, and the fans commonly know them as The Usos. On the other hand, Naomi is also a famous name in women’s wrestling. She has won several golds in WWE but in recent times, she hasn’t gotten to show off her work in the ring. The fans love the couple’s chemistry in the ring, and it can be seen in the previous two seasons of the Mixed Match Challenge, where Jimmy and Naomi shared rings together.

The Kanellis Couple is one of the few names to not have met in WWE. Both have been known to each other for a long time and their first meeting happened at a Northeast Wrestling show. When they first met, they were already in a relationship but as soon as they became single again, they started messaging each other on Twitter.

In 2011, they confirmed their relationship and a year later, got engaged. Their wedding took place in Chicago, Illinois in 2014 and they welcomed their first child, last year, named Fredrica Moon Bennett.

A few months ago, Maria revealed on Raw that she and Mike are expecting their second child. WWE used this real-life story and turned it into a storyline that didn’t work well for either superstar involved. This pregnancy-saga ended abruptly in WWE, and it was probably the right thing to do so.

Natalya and Tyson Kid have known each other since they were 14 and 12 respectively. Tyson has always been close to the Hart family. Their relationship started in 2001 and after 12 years of being together, the couple tied knots and their wedding was also featured on WWE’s reality show Total Divas.

However, they haven’t always been the happiest couple in WWE. In 2014, they were involved in many storylines that had a bad effect on their marriage, as revealed by Natalya. But they worked it out and are still together. While talking about her relationship with Tyson, Natalya also claimed they didn’t even have time to get married and the wedding ceremony became possible because of Total Divas. Tyson doesn’t wrestle for WWE anymore since his neck is injured, but backstage, he has picked up a producer’s role. On the other hand, Natalya works as a singles superstar in WWE and recently made history by performing in Saudi Arabia. 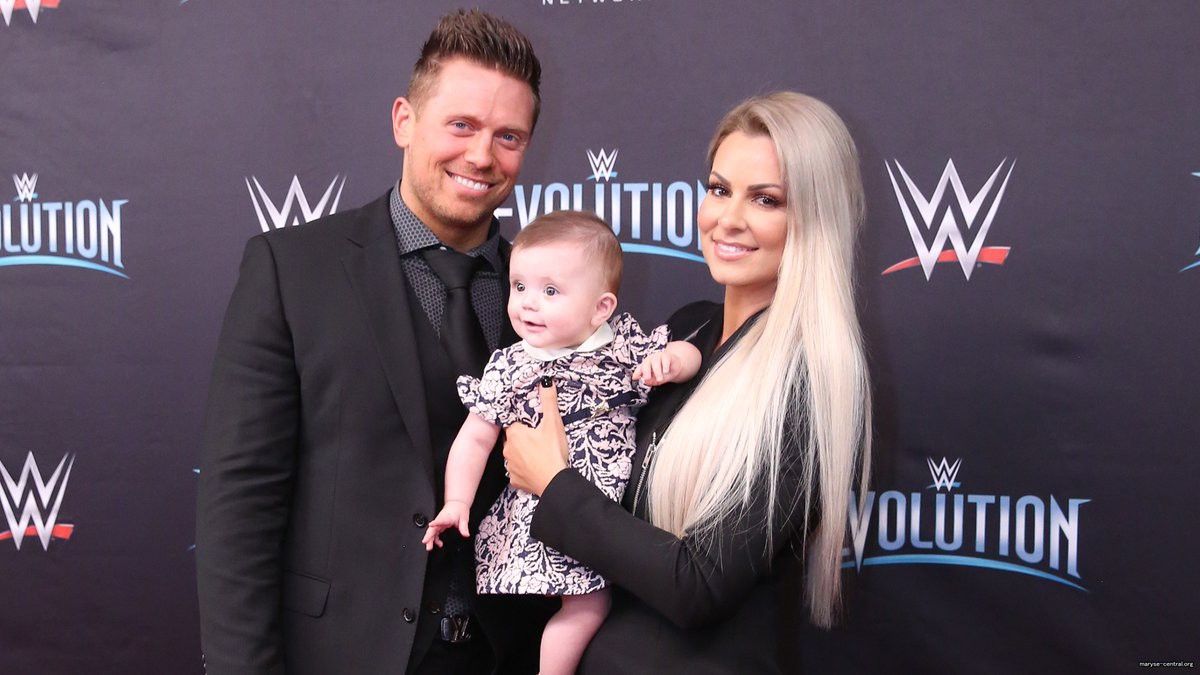 The Miz knew Maryse since 2006 but they didn’t start dating until a few years later. Maryse assisted The Miz on WWE Television for a long time and only in recent years did she started appearing less often because of her parental duties. After dating for a few years, the couple engaged in 2013, and a year later tied knots as well in The Bahamas. It’s been over 5 years since their marriage and now, they have two kids together, Monroe Sky and Madison Jade Mizanin who were born in 2018 and 2019 respectively.

In case you are interested in knowing more about their personal life, they have their own show, Miz & Mrs., which already has completed its first season and is now scheduled to return in 2020. The show, obviously, features both of the superstars and what goes on in their life.

Jon Moxley and Renee Young started dating privately (in October 2013) and it wasn’t until 2015 when their relationship was officially confirmed by Young during an interview. Although, the fans had started speculating about the same long before that. The WWE Universe knew something is going on between these two personalities and their guess was right.

Moxley and Young are one of the most beloved couples of WWE, and because of the fans’ liking towards them, they also won the Favorite WWE Couple title in 2017.

The couple wedded in April 2017, and since then have been enjoying their married life. Both superstars now work for different promotions (Moxley in AEW and Young in WWE), and also have different roles, but it doesn’t seem to be affecting their relationship.

Daniel Bryan and Brie Bella have been featured on WWE Television as a couple for a long time. Even though Brie doesn’t work for WWE as a wrestler anymore, since she’s retired, it hasn’t affected her relationship with Bryan. The couple still gets to share quality time with each other on a regular basis. Their relationship started after WWE had aligned them in an on-screen storyline which later took a turn and made them a real-life couple.

Both engaged in 2013 and were married in April 2014. Their first child, Birdie Joe Danielson, came into this world two years ago, which made Bella busier than ever. Even though Bella doesn’t appear on WWE as much as she used to do before, she still appears regularly on Total Divas, along with her twin sister Nikki Bella.

CM Punk returned to WWE after a 6-year long absence from the company. Even though Punk doesn’t work for them, as he is employed by FOX, he still will be counted as a WWE superstar after appearing at Backstage.

Punk started dating AJ Lee in 2013, again thanks to a WWE storyline that kicked things off between the two. A year later, they were engaged and then tied knots on June 13, 2014. What was supposed to be the happiest day for Punk, became the worst day of his life as he got fired on his wedding day by WWE. This made him lose interest in wrestling and announce his retirement.

After some time, Lee also left the company and retired from wrestling like her husband. However, with Punk working for WWE Backstage, we can expect her to make a return soon. She may not return as a wrestler but instead, she could work with Punk on Backstage. But the odds of happening that are still minimal.

#2. The Undertaker and Michelle McCool

Despite a 15 year age gap between them, The Undertaker and Michelle McCool worked through the odds. They have been married since 2010 and also have a daughter together whose name is Kaia Faith Calaway.

The inaugural Divas Champion of WWE also gathered some backstage heat due to her relationship with The Deadman because back then, there was an unwritten rule that didn’t allow wrestlers to date fellow wrestlers in WWE. Michelle also claimed to have stress because of this, but in the end, everything worked well.

A few months ago, The Undertaker was interviewed by pastor Ed Young, where he wept while talking about his wife, Michelle. She often posts pictures of her husband on Instagram, where The Phenom can be seen happy and out-of-character. The real-life Undertaker is quite different from the one we see on television and it wasn’t something the fans had expected as he rarely breaks kayfabe. 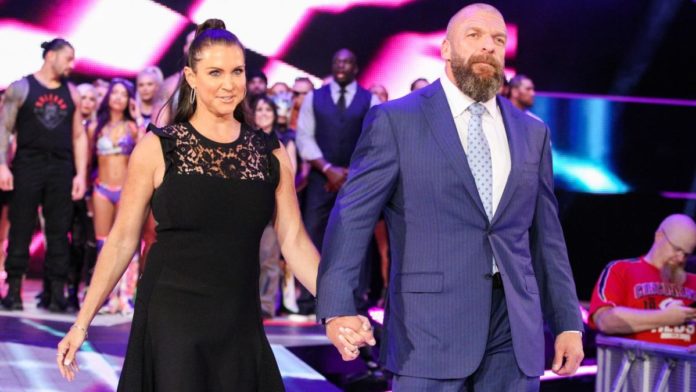 The love-story of Triple H and Stephanie McMahon is a topic of its own. They have been married for over a decade and have three daughters: Aurora, Murphy, and Vaughn.

Triple H started dating Stephanie as part of a storyline in 1999, which developed feelings between them in real-life too. By the time The Game had proposed her female boss, they were already married on Raw and a year before their marriage, they divorced in kayfabe. Pretty confusing, isn’t it? But this played a major role in making them a couple in reality.

Fast forward to 2019 and Triple H and Stephanie McMahon are still going strong. They often share their pictures together on their Social Media profiles and seem to be the happiest couples in all of WWE.

5 WWE superstars who have their own private buses
Royal Rumble betting odds : Listing the potential winners according to the betting community