Top 10 most devastating Super Bowl losses of all time 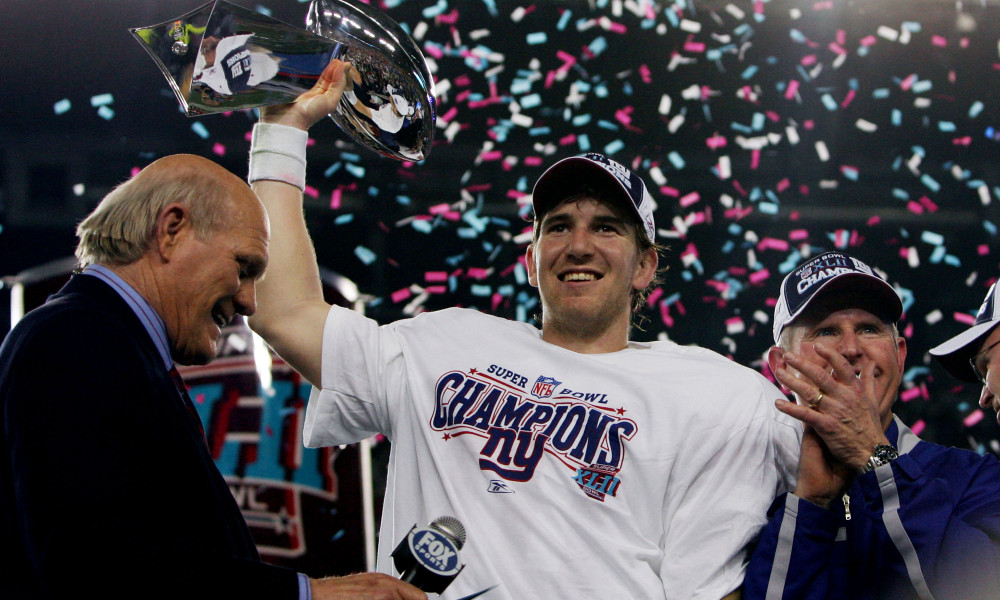 The Super Bowl is the holy grail of the NFL. After months of grueling action, two teams earn the right to battle it out in the NFL’s summit clash and take home the coveted Vince Lombardi Trophy.

Over the years, many teams have managed to lay their hands on the prize. The likes of the New England Patriots, San Francisco 49ers and New York Giants have all won the trophy multiple times.

However, there have been plenty of instances in which teams have suffered spectacular collapses and snatched defeat from the jaws of victory, failing to taste the sweet nectar of glory.

Here, we take a look at the 10 most devastating losses in Super Bowl history:

Fondly remembered as the Harbaugh Bowl, Super Bowl XLVII was the first Super Bowl in history that featured two brothers Jim and John Harbaugh coaching against one another.

It also marked the first-ever defeat for the San Francisco 49ers in a Super Bowl, as they succumbed to the Ravens 34-31.

Joe Flacco guided the Ravens to an incredible 28–6 lead before San Francisco hit back with 17 straight points. The momentum continued to swing as Colin Kaepernick did his best to keep the Niners in the contest. Kaepernick’s touchdown run in the fourth quarter brought San Francisco to within two points, but the Ravens managed a field goal to extend the lead to 5.

San Francisco, following another great drive, had 4 attempts to get into the End Zone but three consecutive incompletions meant they turned the ball over on downs.

With time running out, the Ravens intentionally gave up a safety to run down the clock, all but sealing the victory. 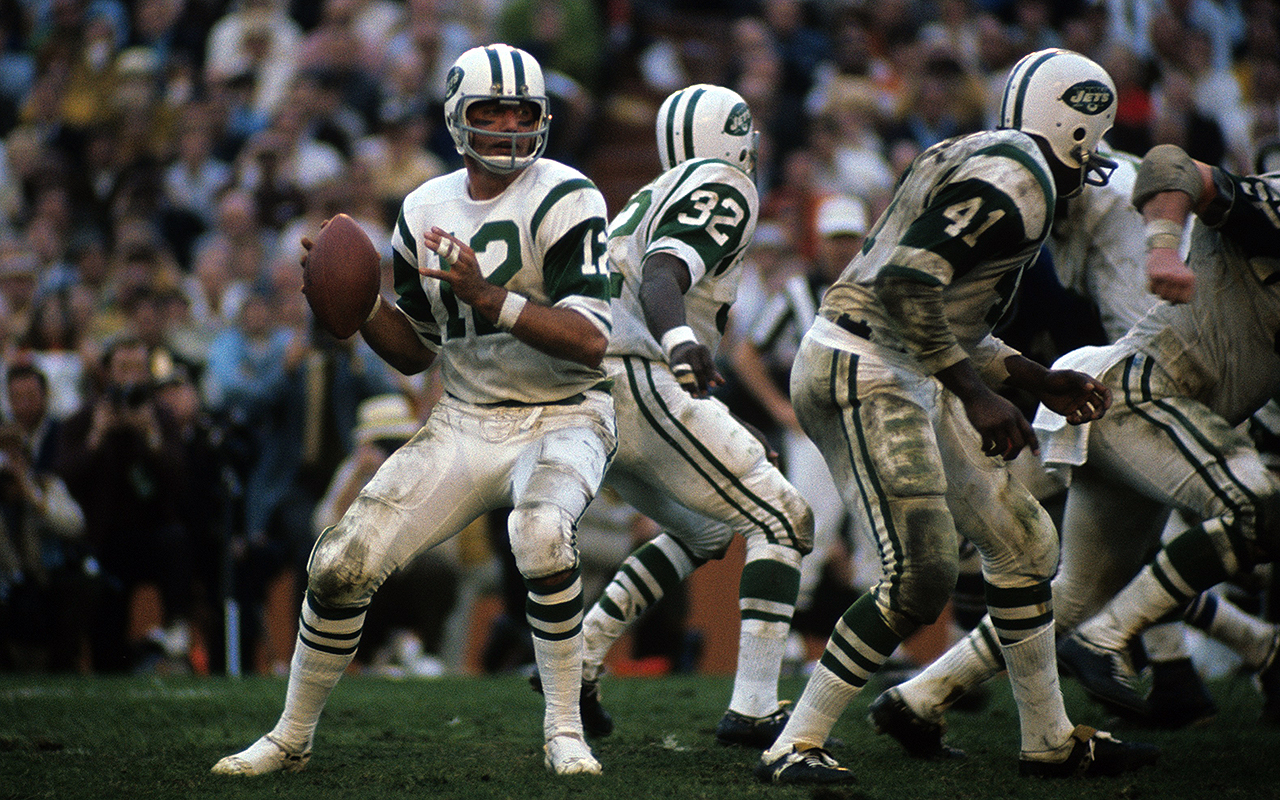 One of the biggest upsets in NFL history took place in just the third Super Bowl when 18-point underdogs New York Jets shocked the Baltimore Colts to pick up the AFL’s first-ever Super Bowl.

The game is best remembered for Jets quarterback Joe Namath’s controversial statements ahead of the game, guaranteeing his side’s victory.

Namath however, ensured his side delivered upon the promise. Although he failed to throw a touchdown, he still finished with 208 passing yards and was named Super Bowl MVP for his efforts. The Jets built up a 16-0 lead and comfortably closed out the game, with Colts defensive end Bubba Smith claiming that the game was rigged by the NFL in the aftermath.

Heading into Super Bowl XLII, the New England Patriots boasted arguably the greatest team of all time. They were also looking to cap off a perfect season, having gone 18-0 until that point. Their opponents in the Super Bowl would be the New York Giants, a Wild Card team, led by Eli Manning.

The Giants were expected to be overrun by the Patriots, but instead, they began the stronger team, scoring a field goal off a 10-minute drive. Although the Patriots hit back strongly to take a 7-3 lead into half-time, the Giants were buoyed by the fact that they were staying competitive with such a dominant side.

After a scoreless third quarter, the Giants scored their first touchdown of the night courtesy David Tyree. However, New England hit back again, with Randy Moss giving the Patriots a 14-10 lead.

Bill Belichick’s side were 75 seconds away from a perfect season, but Eli Manning had other ideas. On third and five near midfield, Eli somehow evaded two Patriots defenders and avoided taking a sack before flinging the ball downfield and finding Tyree, who grabbed onto it using his helmet in one of the greatest catches in Super Bowl history.

That knocked the stuffing out of the Patriots and a Plaxico Burress touchdown with 35 seconds remaining sealed a historic night for the Giants. 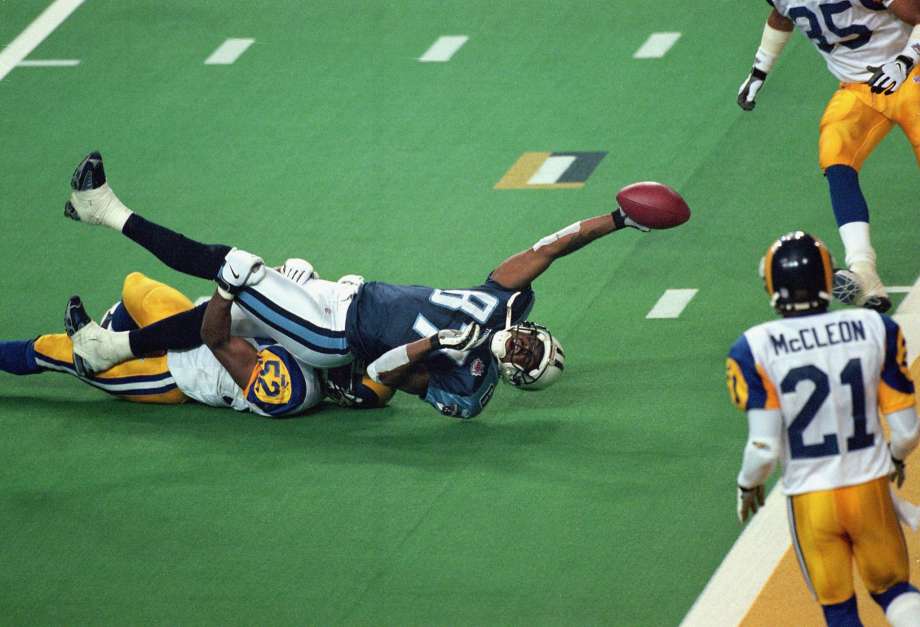 A Super Bowl that was decided by 1 yard. The Rams had lost their starting quarterback Trent Green to an injury but that proved to be beneficial as Kurt Warner took over the role and led the side to the Super Bowl in dominant fashion.

The Titans, on the other hand, had narrowly made it to the Super Bowl after eking out wins against the Colts and Jaguars. Although the Rams were favourites, the Titans managed to keep the game close and despite Kurt Warner’s brilliance on the night – he finished with a record 414 passing yards – Tennessee had a chance to win the game on the final drive.

Steve McNair produced a remarkable play with under a minute remaining, avoiding a sack near the 40-yard line and finding Kevin Dyson to put the Titans within striking distance.

McNair then found Dyson again off the final play of the game, but he was tackled one-yard short to seal the Titans’ fate. 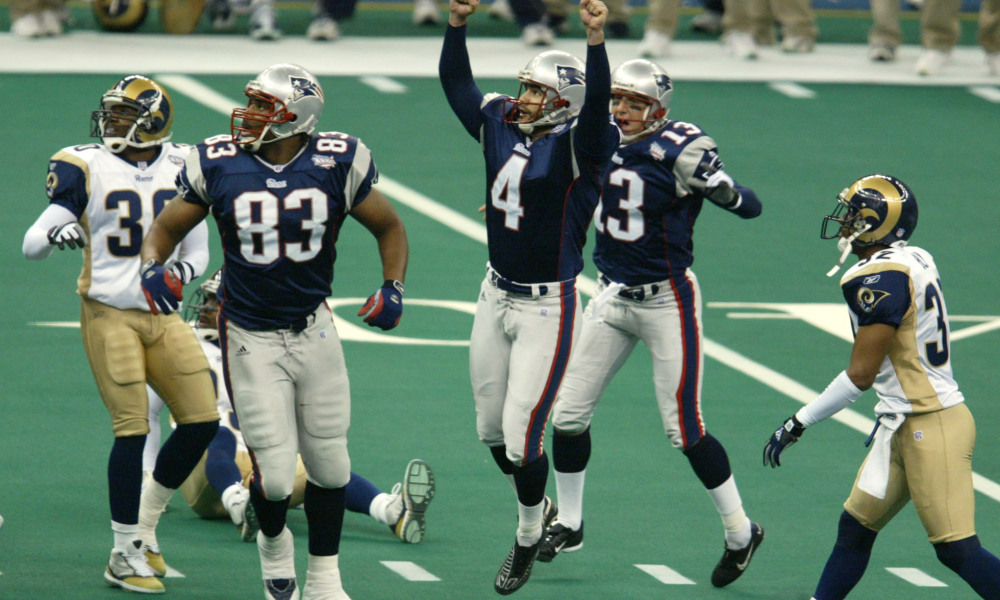 The game that marked the beginning of the Brady-Belichick era and the end of the ‘Greatest Show on Turf’. The St. Louis Rams, on the back of their explosive offense, had made the Super Bowl for the third year on the trot and were overwhelming favourites against a Patriots side devoid of their starting quarterback.

New England had just about squeezed into the playoffs thanks to Adam Vinatieri’s heroics and a controversial call in their game against the Oakland Raiders. They were expected to be blown away by the Rams, and to an extent, they were.

However, turnovers proved costly for the Rams, who had no answer to the Patriots’ brand of stifling defense.

They managed just one field goal in the entire first half and two of the turnovers they committed resulted in Patriots touchdowns, meaning they entered the break trailing 14-3.

Another Kurt Warner turnover meant resulted in 3 further points for New England in the second half as they stormed to a 17-3 lead. However, following a pick-six that was overturned for a penalty, the Rams managed their first touchdown of the night to reduce the arrears.

They then levelled proceedings through a Ricky Proehl touchdown, but with under 90 seconds to go, Tom Brady turned up the heat. He brought the Pats into field goal range and a 48-yard attempt from Vinatieri ensured New England had produced one of the biggest upsets in NFL history. 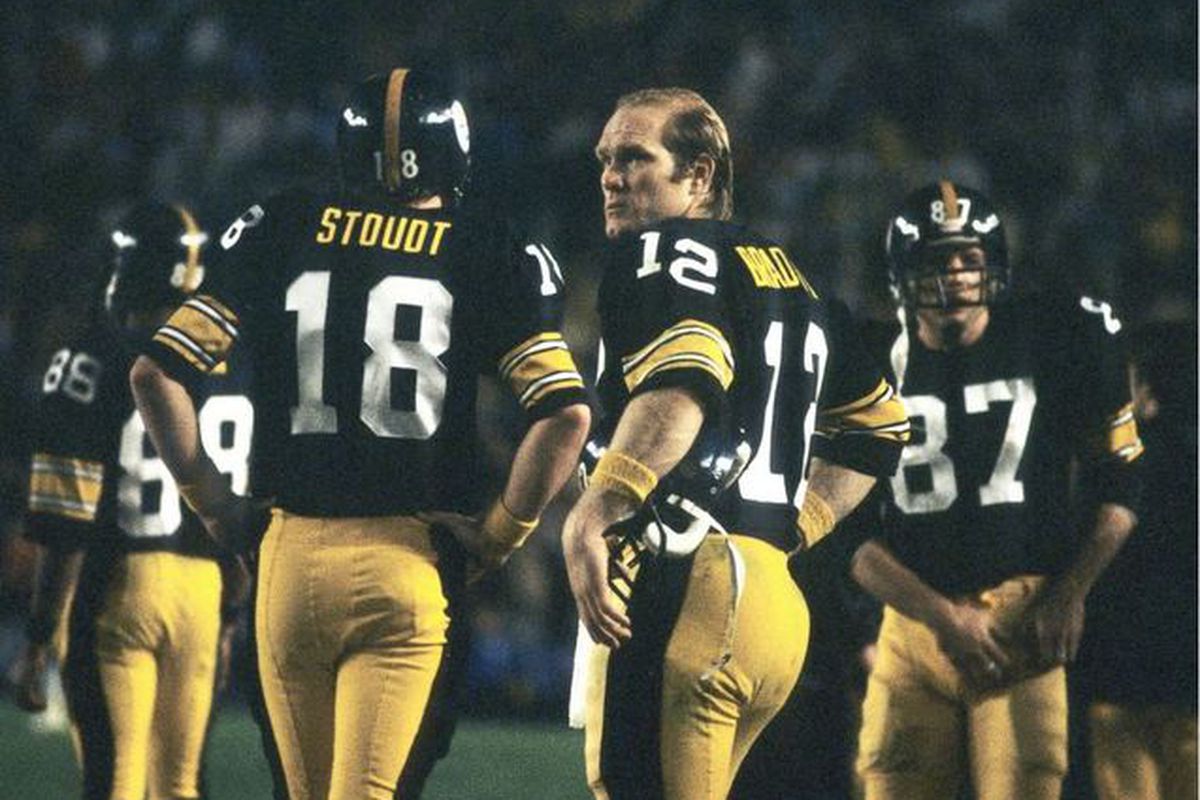 One costly drop cost the Dallas Cowboys the Super Bowl. The Cowboys were defending champions, but did not have a great regular season, finishing with a 12–4 record. The Steelers, meanwhile, led by star quarterback Terry Bradshaw, posted a 14-2 regular-season record and entered the contest as favorites.

As many as 19 Hall of Famers featured in this game which went back and forth as the two teams traded blows.

However, a costly drop by the Cowboys’ reserve tight end Jackie Smith turned the tide in the Steelers’ favour. With Dallas trailing by seven late in the third quarter, Smith found himself open in the end zone. Cowboys quarterback Roger Staubach rifled a throw to Smith, who shelled it, meaning Dallas had to settle for a field goal.

That drop arguably cost the Cowboys the game as the Steelers went on to score 14 unanswered points and by the time Dallas hit back, it was too little too late. 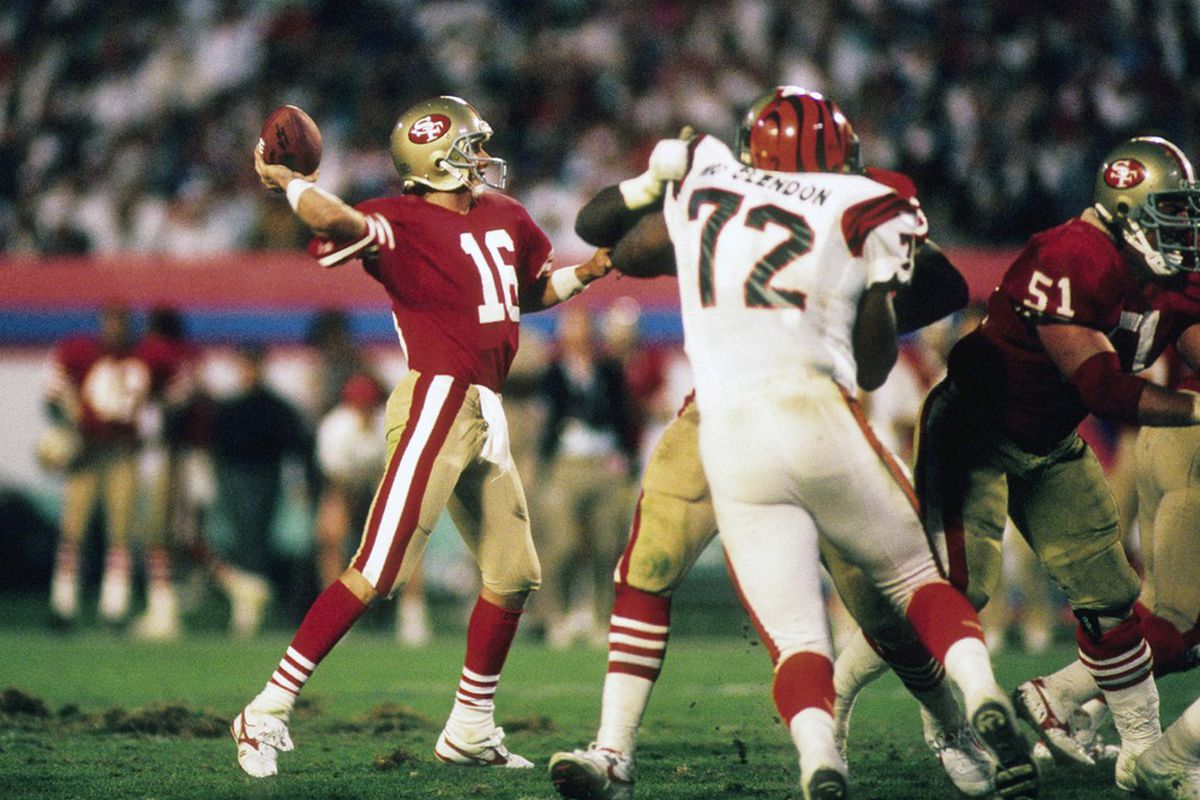 The 49ers headed into Super Bowl XXIII with arguably the greatest quarterback of all time, Joe Montana, at the helm. The two teams had locked horns seven years earlier, with the 49ers coming out on top, and the Bengals were gunning for revenge this time around.

In what was considered a dull affair, the two teams traded field goals in the first half, entering the break with the scores tied at 3-3.

At 6-6 in the third, a Bengals kickoff return gave them a 13-6 lead. Both teams continued to trade blows and the 49ers entered the final three minutes of the game trailing 16-13.

With the ball on their own 8-yard line, Montana needed to come up with something magical and that’s exactly what he did, leading his side 92 yards downfield, with John Taylor’s touchdown sealing the game for his side.

The game is remembered, till this date, for Montana’s game-winning drive which cemented his reputation as one of the greatest quarterbacks of all time. 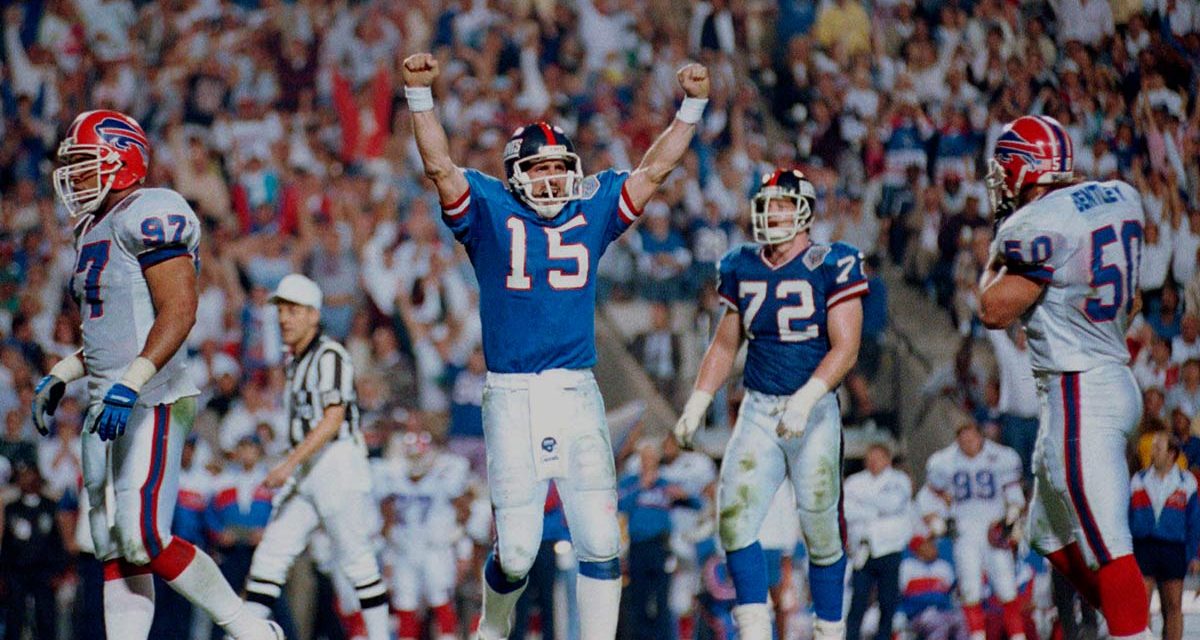 The Bills entered Super Bowl XXV as firm favourites following the injury to New York’s star quarterback Phil Simms. They had annihilated the Oakland Raiders 51–3 in the AFC Championship game, and sure enough, started off the Super Bowl confidently, racing away to a 12-3 lead.

The Giants though produced a stunning turnaround and two touchdowns later, they were in the lead. The game swung back and forth and with the Giants leading 20-19 with two minutes to play in the fourth, it was anyone’s for the taking.

A few big plays later and Bills kicker Scott Norwood found himself lining up to score the game-winning field goal. However, his 47-yard attempt flew wide of the uprights and the Giants held on for a remarkable win. 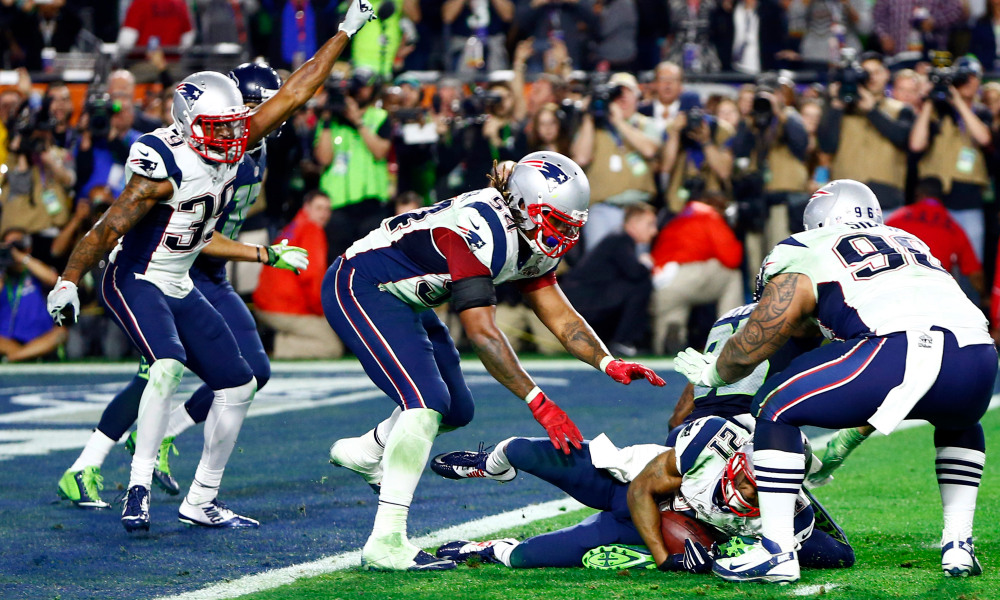 The best team in the NFL vs the defending champions. What more could fans have asked for? Seattle and their Legion of Boom defense entered Super Bowl XLIX confident of retaining their title, but they were up against a formidable New England side that hadn’t tasted success in a while.

The first half ended 14-14 and Seattle quickly pulled away into a 10-point lead on the back of a touchdown and field goal. Brady, as is his wont, engineered another sensational comeback and two touchdowns later, the Patriots had a 28-24 lead.

However, Russell Wilson, who was keen to create his own legacy, drove Seattle deep into Patriots territory. Marshawn Lynch then ran it down to the one-yard line as Patriots fans looked on in dismay.

The came one of the worst play calls in NFL history. With Lynch looking unstoppable running the rock, all the Seahawks needed to do was hand him the ball one last time and watch him torment the Patriots defense.

However, Seattle coach Pete Carroll opted to have Wilson throw and the quarterback’s pass was picked off by Malcom Butler on the goal line to ensure the Pats came away with their first Super Bowl title in a decade. 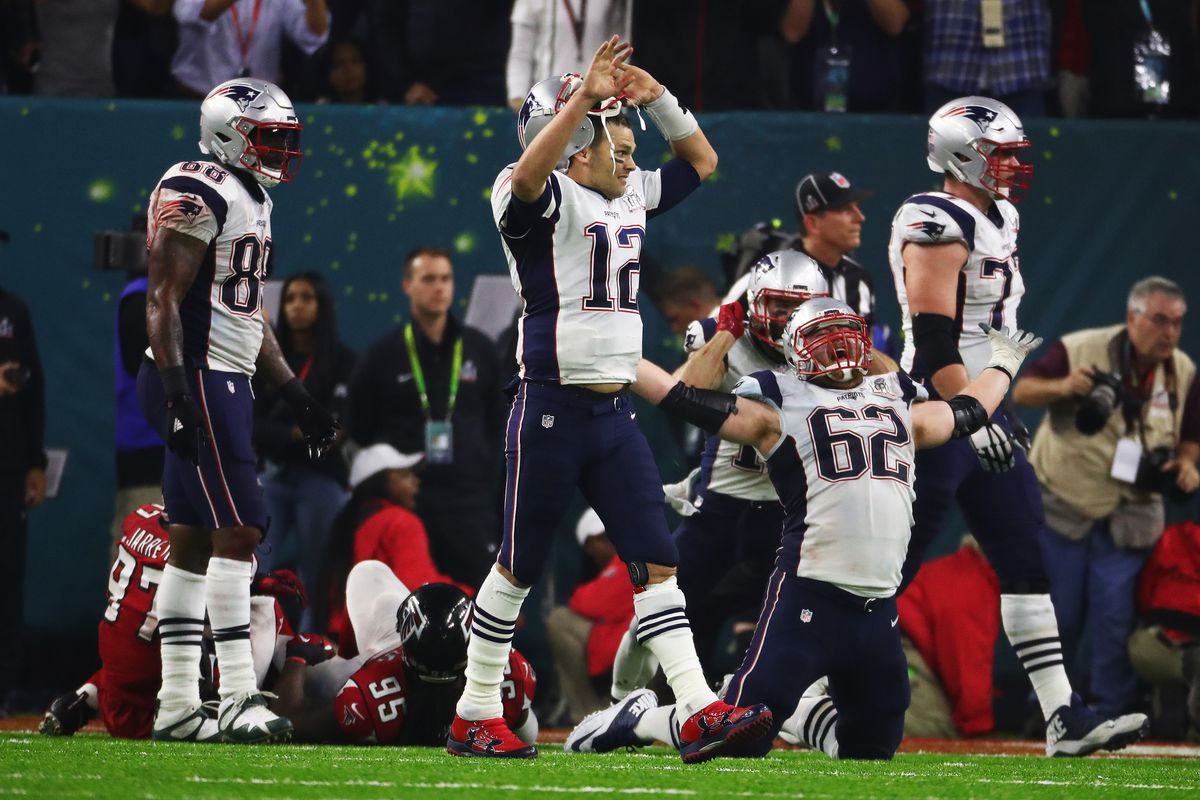 The New England Patriots though were favourites after claiming the top seed in the AFC. However, the Falcons burst out the blocks and raced into a 14-0 lead. The Patriots looked to have weathered the storm as Tom Brady led them downfield late in the second quarter.

However, a Robert Alford pick-6 meant the Falcons had a three-touchdown lead in two quarters. A Stephen Gostkowski field goal reduced the arrears, but the Falcons entered half-time 21-3 to the good.

It was much of the same in the third period as the Falcons increased their lead to 25. However, the Patriots managed to score their first touchdown of the game to claw within 19 points of Atlanta.

A failed onside kick followed by a Gostkowski field goal meant the scoreboard read 28–12 when the Patriots finally sprung into life.

Dont’a Hightower then strip-sacked Matt Ryan and the Patriots scored from their resulting possession, closing the gap to 28-20 following a two-point conversion by James White.

Another sack of Ryan followed by a penalty forced the Falcons to punt on their next drive and New England were poised to strike.

Julian Edelman then produced one of the greatest catches in Super Bowl history, scooping up the football inches off the ground, to take the Patriots deep into Falcon territory. James White was then targetted three times as New England managed another touchdown and two-point conversion to draw level.

The game headed into overtime and the Patriots completed the most memorable comeback in Super Bowl history by scoring another touchdown in their opening drive.

Just when everyone had begun doubting Tom Brady, he had helped New England erase a 28-3 deficit in one of the greatest Super Bowl games of all time.