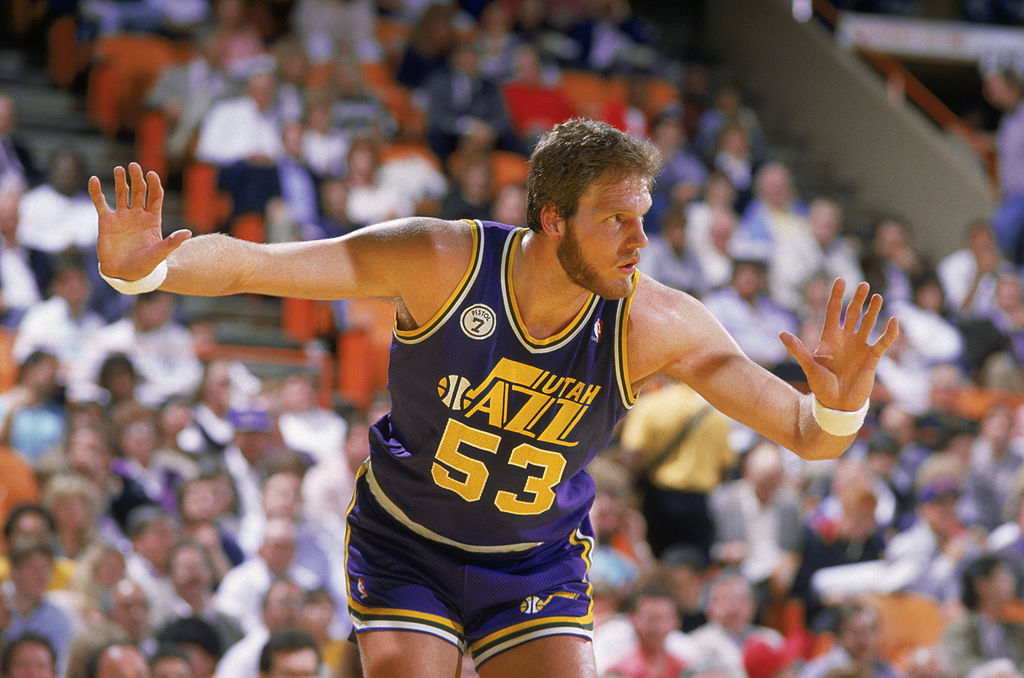 Contesting the shot is literally the last thing a defensive player can do when guarding his opponent and if this contesting is done right, it often ends up with a block added to the defensive player’s stat sheet. A block is defined as an attempt to prevent an opponent by making contact with the basketball while the opponent is shooting the ball. Like stealing the ball, blocking is actually one of the most difficult play to perform in basketball. It requires a player to have a long arm reach, tall legs and torso and most importantly is good timing and effective techniques. Logically, most of the NBA’s best shot-blockers are giants who often measure up to 2 meters or taller. This list informs who the 10 greatest shot-blockers in the history of NBA. 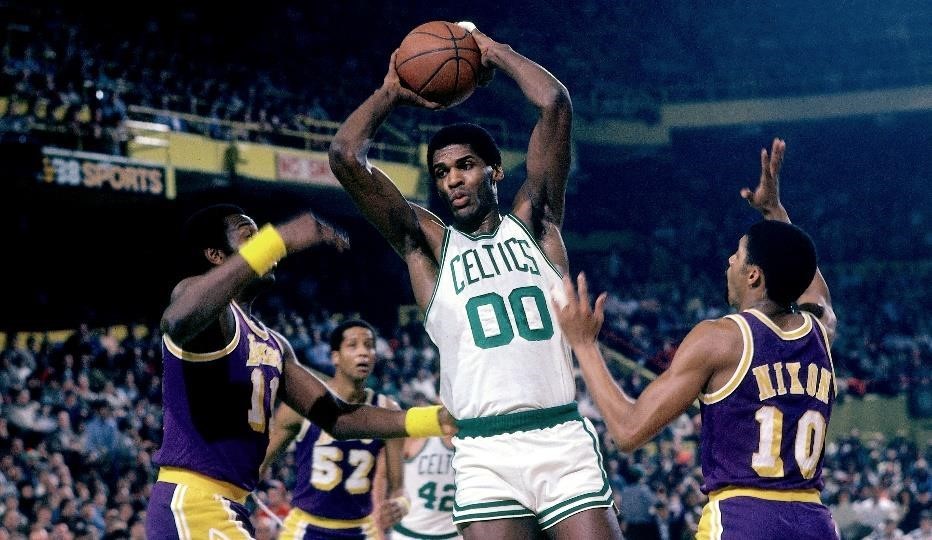 Parish was a very versatile, slender player with a height of 2.13 m. His body made him very impressive in defense while being very skillful at mid-range and perimeters. He was also able to conclude fast breaks at an unusual speed for a player of his stature. His signature move was a unique bell-shaped jump shot which rose very high before touching the rim. He is nicknamed “Chief”, in reference to the Indian from the movie in the film “One Flew Over the Cuckoo’s Nest”.

Parish is the all-time leader in blocks, offensive rebounds and defensive rebounds for the Boston Celtics. In his career with the Celtics, he recorded an average of 16.5 points, 10.0 rebounds and 1.5 blocks. Throughout his career, Parish had some games that saw him blocking very many shots. For example, on October 29, 1978 against the Cleveland Cavaliers, Parish rejected 11 of his opponents’ shots. Another occasion where he displayed his blocking ability is on March 17, 1982 where he swatted 9 shots against the Atlanta Hawks 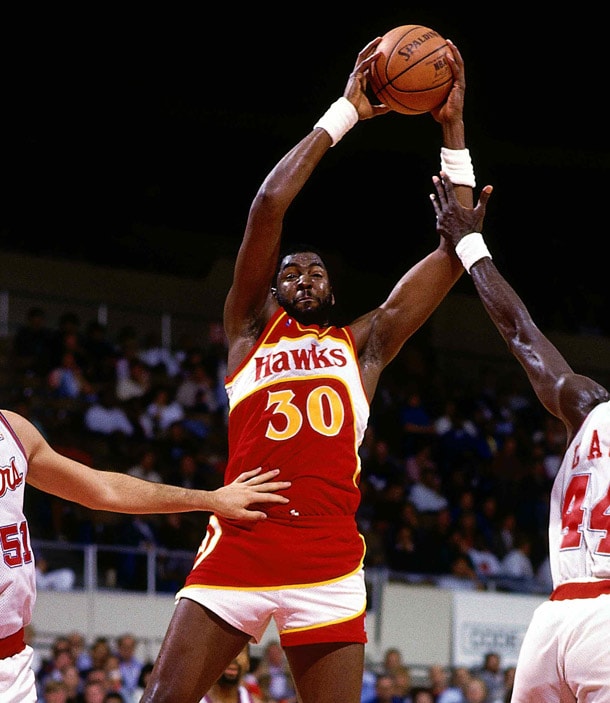 Rollins was selected in the 14th position of the 1977 NBA Draft by Atlanta Hawks, where he became a defensive specialist. In the 1982-83 season, he averaged 7.8 points, 9.3 rebounds and 4.3 blocks per game and being elected to the NBA All-Defensive Second Team.

The following year he was second in the list of top blockers, behind Mark Eaton, being included this time in the NBA All-Defensive Team. After 11 seasons in the Hawks, he decided to change his team, signing as a free agent for the Cleveland Cavaliers where he played two seasons as a substitute for Brad Daugherty.

Already 36 years old, he was hired by the Houston Rockets to give minutes to their starting center, Hakeem Olajuwon. At the end of his career, he was ranked 9th in the most blocks in the history of the NBA with 2542 blocks. In his career, he averaged 5.4 points, 5.8 rebounds and 2.2 blocks per game.

With his body size of 2.16 m, a shoe size of 22 US size and a weight of about 150 kg, he is characterized by exceptional strength but also mobility in the low post. He was considered the best player in the center position for years. By the 2007/08 season, he had an average of 25.2 points per game and an average of 11.5 rebounds. The biggest weakness of O’Neal’s game was throwing from a distance. To take advantage of this free-throw weakness and stop O’Neal under the basket, Don Nelson (a legendary coach) developed the “Hack-a-Shaq” tactic in which O’Neal was deliberately fouled.

O’Neal was also a good defender as he was named three times to NBA All-Defensive Second Team. His presence also helped intimidate the rivals, which made him have an average of 2.3 blocks per game. If you doubt his blocking ability, check out the video which shows Shaq blocking Allen Iverson. Not amazed? Look at this stat line. In 1993, O’Neal recorded his first triple-double by scoring 24 points, 28 rebounds and 15 blocks against the New Jersey Nets. Now that is some crazy stuff, right? 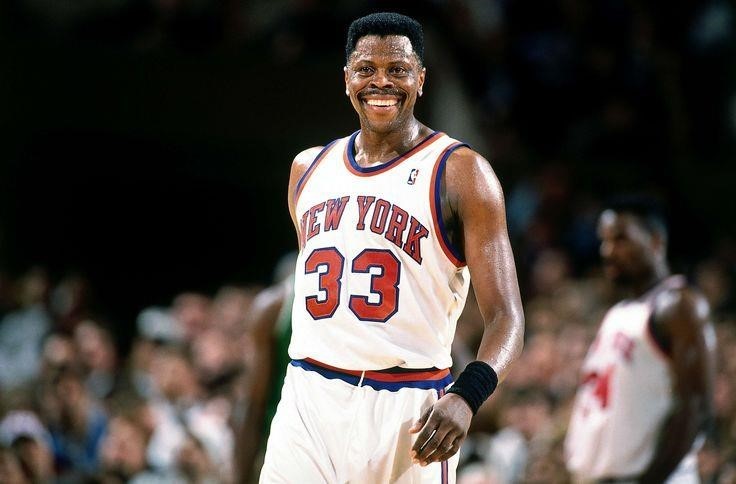 Ewing attended Georgetown until 1985. In 1984, Ewing was a member of the U.S. Olympic team that won the gold medal at the Los Angeles Olympics, and he led his college team to the NCAA Division I Basketball Championship that year. In 1985, he was selected as the first overall pick by the New York Knicks in the NBA draft. In his first year, he was voted Rookie of the Year and was accordingly appointed to the NBA All- Rookie Team.

Ewing played most of his NBA career with the New York Knicks (1985–2000). He was known as a very excellent shot-blockers with very accurate timing. Just take a look at the footage of him blocking Moses Malone. No other player in the history of Knicks have more points scored, blocked shots, rebounds and steals than him. Ewing led the Knicks to the 1994 and 1999 NBA finals, but lost both times. When he retired, Ewing recorded an average of 21.0 points, 9.8 rebounds and 2.45 blocks in 1183 NBA games. He is considered one of the best NBA players who has never won a championship with his team in his entire career. 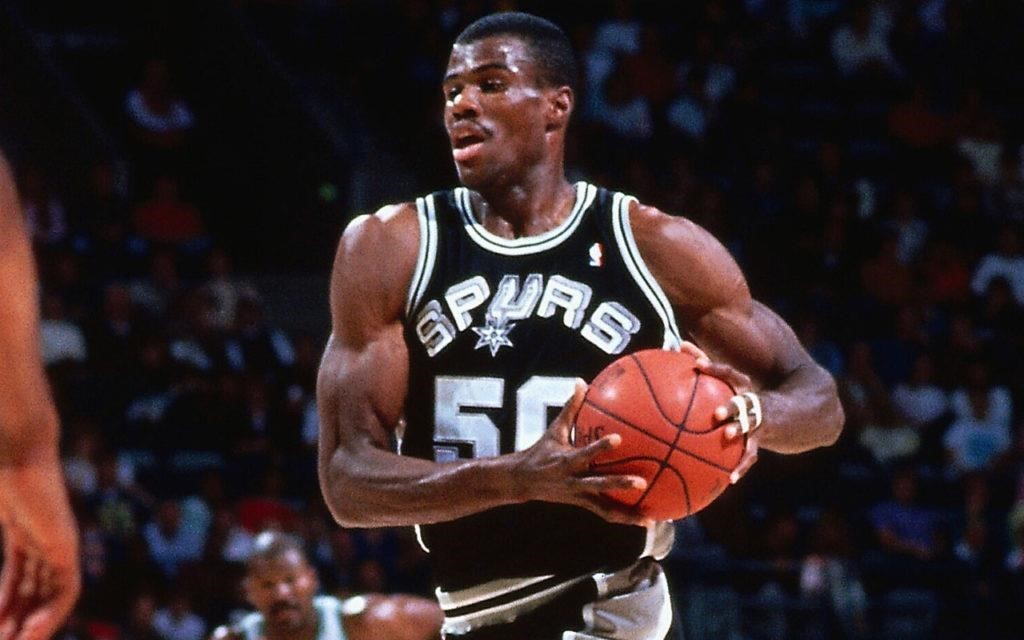 Before entering the NBA, the 2.16-meter center of the San Antonio Spurs spent two years in the Navy, following his father’s footsteps. People dubbed him “The Admiral” due to his background. The hard life he lived in Navy made him a very rigorous player, always focused and exemplary for his teammates. These are all reasons why this natural leader won 2 NBA titles in 1999 and 2003 with young Tim Duncan and their coach, Gregg Popovich.

Selected first in the 1987 NBA Draft by the San Antonio Spurs, he had to wait 2 years to finish his military service before joining the club. One fun fact: The Navy actually excused him from remaining 3 years of service remaining, explaining that his size prevented him from fulfilling several tasks. That was a blessing to be a big man, ain’t it?

The Admiral actually ended his career averaging 21.1 PPG, 10.7 RPG, 3 BPG and 2.5 APG. He ranks sixth in the all-time list of blocks leader, just one place after his junior teammate Tim Duncan. 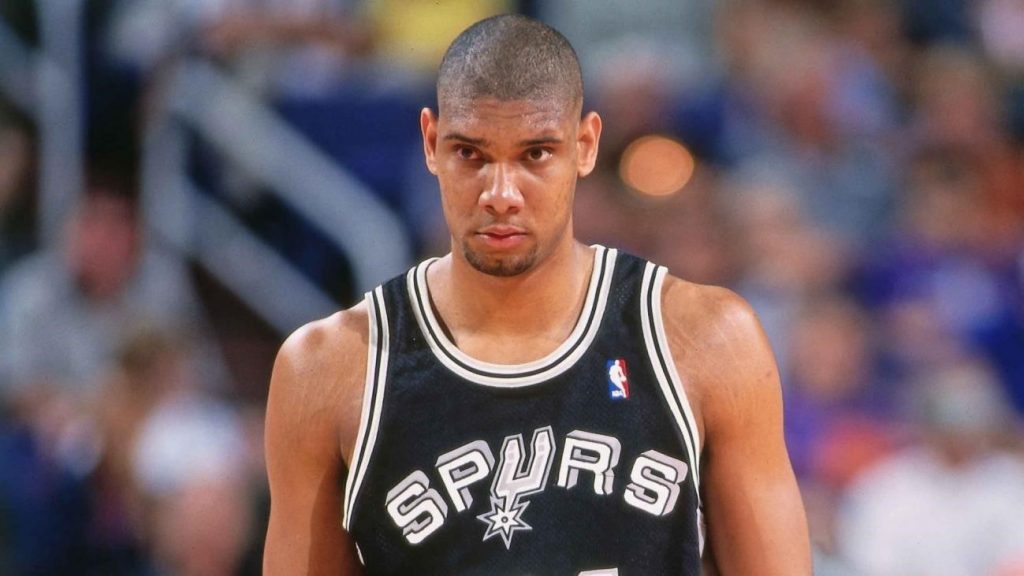 Duncan ended up with San Antonio Spurs through the 1997 NBA Draft and played for this team until he ended his career in July 2016. Duncan won the rings five times in the NBA and he was personally elected twice as Most Valuable Player, three times as NBA Finals Most Valuable Player and fifteen times as NBA All-Star. He is considered the best power forward of all time by a lot of pundits. Starting in the 2019-20 NBA season, Duncan begins a coaching career as an assistant to his former Spurs coach Gregg Popovich.

Besides being known as a good scorer, he was actually a solid defender, averaging 2.2 blocks per game. This talent of defending had already been discovered since he was in college. Duncan was the first player in the history of NCAA to reach 1,500 points, 1,000 rebounds, 400 blocks and 200 assists. On February 27, 2016, he became the 6th best rebounder in NBA history surpassing Karl Malone and making his 3000th career block the same evening. 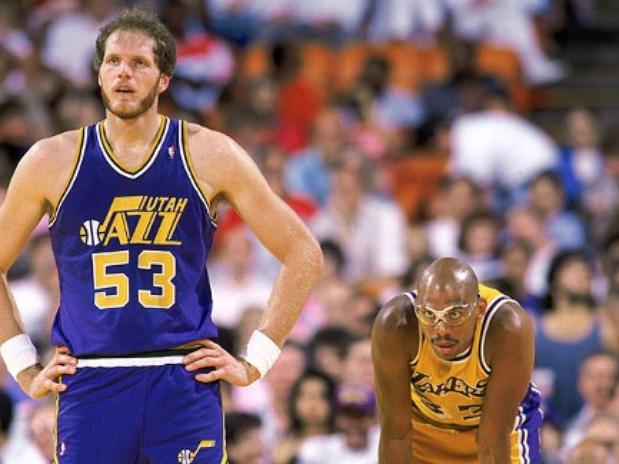 Until he was 21, Eaton had never played basketball at high school or college level. But due to his enormous height of 2.25 m, Eaton was encouraged to play basketball in the nearby UCLA. Eaton hardly got any playing time, was not considered a talent after completing his four college years. He was picked 72nd in the 1982 NBA Draft by Utah Jazz.

Right away, Eaton established himself as one of the most effective shot blockers in NBA history. After blocking 275 shots in his first years, in the 1984/85 season, he set the NBA record of 456 blocks (5.56 per game) that is still active today. He then won the NBA Defensive Player of the Year Award. Together with his new teammates Karl Malone and John Stockton, Eaton laid the foundation stone for the rise of Utah Jazz as a regular playoff team. Eaton was named NBA Defensive Player of the Year again in 1988.

Mark Eaton has been the only player since the beginning of the 1983/84 season to get a double-double of rebounds and blocks in one game while scoring exactly nine points, missing a triple-double by just one point. Eaton managed this feat three times in his career. Eaton, who was physically strong and known for his excellent timing, suffered more knee and back problems in his career and finally ended his career in 1993 at the age of 36. 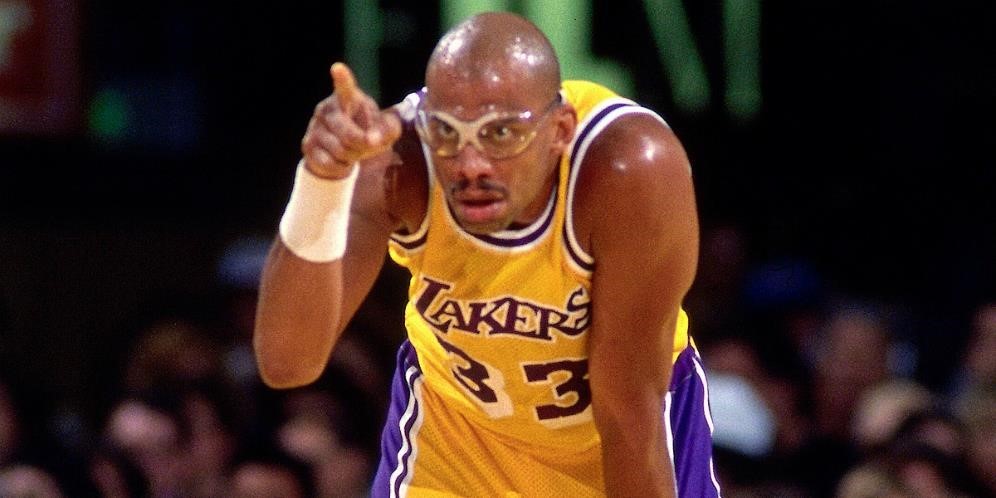 Abdul-Jabbar was actually born as Ferdinand Lewis Alcindor however he converted to Islam and took his Arabic name in 1971. After graduating from the UCLA, he played for the Milwaukee Bucks and the Los Angeles Lakers. At UCLA, the 2.18m-center caught a scraped left eye ball and from then on, he played with protective glasses.

Abdul-Jabbar is one of the of top athletes who can be recognized by many people by their first names such as Tiger, Magic, Shaq, Kobe and LeBron. His achievements list includes six titles in the NBA, six times MVP, eighteen times All-star selection and a record in terms of points scored: 38,387. However, one thing that others do not notice is that he also ranks third in the all-time list of blocks leaders with 3189 blocks.n His number, 33, was retired by both the Milwaukee Bucks and the Los Angeles Lakers and therefore never be worn by another player in those teams. 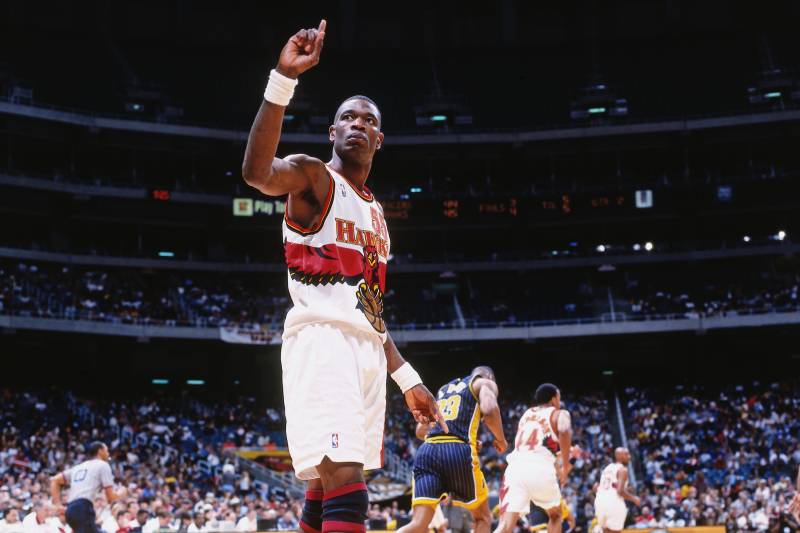 Dikembe Mutombo is a former Congolese basketball player who used to play for Denver Nuggets, Atlanta Hawks, Houston Rockets and several other teams. The center has been a citizen of the United States since 2006. With 2.18 meters and an arm span of 2.75 meters, he was one of the biggest NBA players.

He was nicknamed “Mount Mutombo” because of his size and ability to block shots – like an indomitable mountain. He is one of the best defensive players in the history of the NBA, four times he won the NBA Defensive Player of the Year Award. He took part in the NBA All-Star Game eight times. Mutombo, in his 18-year NBA career, is ranked second in the all-time lists for blocks leaders, just behind Hakeem Olajuwon. Mutombo became known for his habit of waving his opponent with his forefinger after successful blocks, followed by saying “Not in my house”. 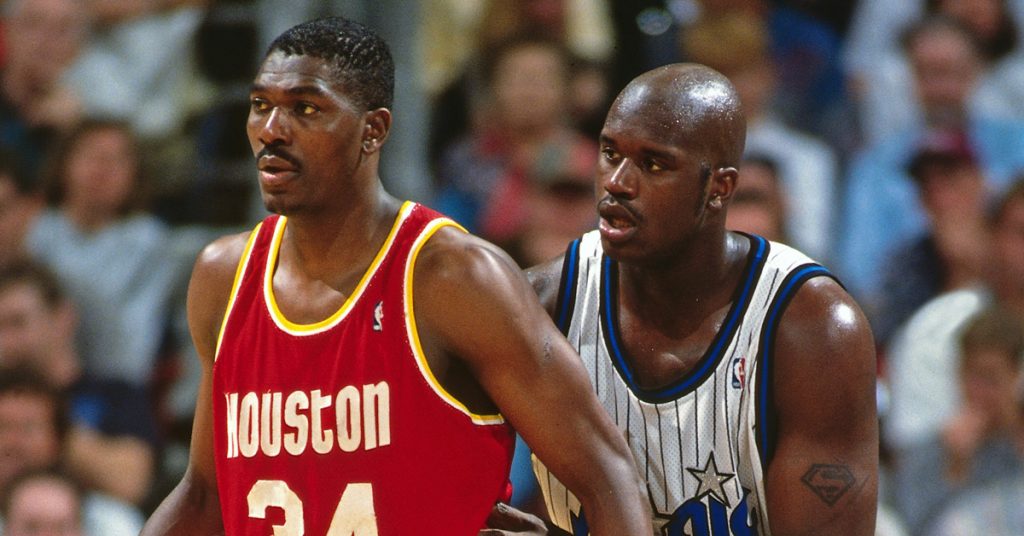 NCAA commentator Dick Vitale first called Hakeem Olajuwon “The Dream” when he played for the University of Houston. It is easy to get it right since Olajuwon played a dream basketball throughout his career. With his incredible, unique back-to-basket moves, he scored basketball swiftly and beautifully.

Olajuwon is without question one of the best centers in the history of the league, alongside George Mikan, Bill Russell, Wilt Chamberlain and others. His ambidexterity and performance on the court have earned him the nickname Hakeem The Dream. He had very good mobility for a center with a 2.13-meter-tall stature.

He is particularly renowned for his qualities as a defender. With 3,830 blocks in 1,238 games – that’s an average of 3.09 blocks per game – Hakeem Olajuwon is the best blocker in NBA history. In addition, he ranked 8th in terms of steals with 2162. He is also one of the four players to have registered a quadruple- double, and the player to have registered the most five-by-five (6). He is considered one of the best African sportsmen in history and ended his career with two titles in 1994 and 1995 with the Houston Rockets.