It’s UEFA Nations League final and what a way to finish the business as defending World Champions France take on Spain for the ultimate glory at San Siro on Sunday.

France who come to the final after an impressive 3-2 comeback over Belgium in the Semi Final are pretty confident to take the trophy home. There was no way back for the Les Bleus at some point against the Red Devils but the Frenchmen somehow found a way out, thanks to Mbappe-Benzema partnership. Deschamps is hopeful of this pair as they’re expected to fire up once again.

Spain on the other hand had brought in quite an upset as they ended Italy’s long unbeaten streak. Winning the match 2-1, the Spaniards are basking in the glory for the trophy now. This promising and young Spanish side has quite been well managed by Lucho and this team has the serious capabilities of landing a big silverware.

This is a match that’s very hard to predict. A match that can go either way and is matched up so closely. Even though France are favourites to win this tie given they’ve the experience they need in big stage, but Spain has the form they need to win it.

Please Note: The odds are via MelBet. We do not promote betting. Please bet at your own discretion.

The pick of the match is France.

No such injuries for either of the squads.

Ngolo Kante is out of the squad for France after testing Covid-19 Positive.

No such suspensions for Spain. 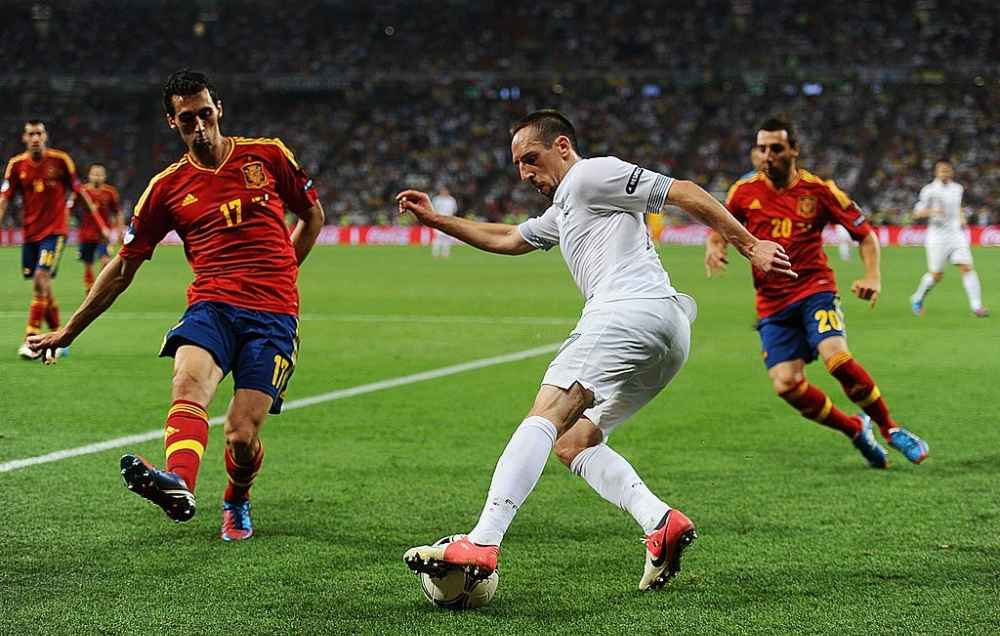 Franck Ribery of France controls the ball infront of Alvaro Arbeloa of Spain during the UEFA EURO 2012 quarter final match between Spain and France at Donbass Arena on June 23, 2012 in Donetsk, Ukraine. (Photo by Laurence Griffiths/Getty Images)

1. Kylian Mbappe: 3 goals and an assist in 5 matches and we don’t wonder why he’s the we’ll be looking at tonight.

2. Antoine Griezmann: With 2 goals and an assist, this Atletico Madrid player is a must one to look out for.

3. Karim Benzema: The Real Madrid striker was the first one to pull one back against Belgium in Turin, so the eyes will be on his for today’s match as well.

1. Ferran Torres: His brace against Italy gave them the victory. The Man City forward has scored a total of 6 goals in 7 appearances.

2. Mikel Oyazabal: This winger is the perfect partner in crime alongside Ferran Torres for Lucho.

3. Koke: The Atletico Madrid midfielder holds the midfield like no other and he’s the one to look out for to keep French attack in check.