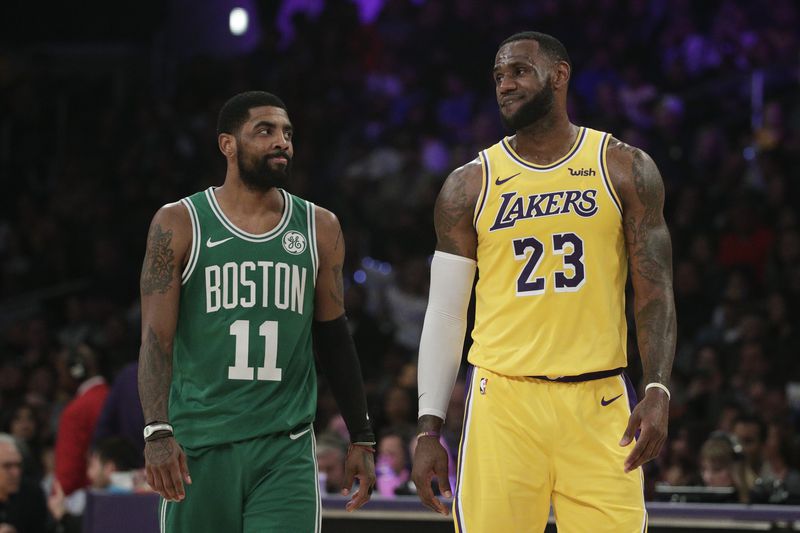 Nets’ point guard Kyrie Irving was heavily praised by LeBron James for his skills, after an electrifying performance, and a shocking defeat against the Celtics.

With the NBA playoffs underway, the Boston Celtics hosted the Brooklyn Nets in the first game of their series at the TD Garden. Jason Tatum might have stolen the show with his buzzer layup, but another man who got heaps of praise was Nets’ point guard Kyrie Irving.

The former Celtics man was in superb form as he recorded 39 points and 6 assists in a game that went 115-114 in favor of the Celtics. But the loss failed to overshadow Irving’s performance, as he even got praised by King LeBron James himself.

LeBron’s tweet has gotten a lot of attention, especially given their volatile relationship. In 2016, they shared a locker room and assisted their then-employers, the Cleveland Cavaliers, to their first and only NBA finals victory. Despite their achievements, the two did not always agree.

While it’s difficult to pinpoint a specific reason, most speculations indicate that James’ return to the Cavaliers after a stint with the Miami Heat had usurped Irving as the top dog in this Ohio-based team.

Although there hasn’t been any acrimonious feud between the two, their indirect jibes at one another have led to eventual complications in their relationship. Their rift eventually led to Irving leaving the Cavs to join the Celtics in 2017.

Last night Irving’s high-action performance might have a lot to do with the Celtics fans booing him every time he got the ball. Irving, who left the Celtics in an unceremonious manner in 2019, has been a victim of jeers from the Celtic crowd every time he returns to Boston. Despite the fact that this was familiar territory for Kyrie Irving, he showed great mettle by taking the challenge head-on.

The 7-time NBA all-star was composure personified, and the jeers from the crowd seemed to pump him up even more last night. Irving almost ensured that the Celtics’ fans’ behavior would come back to haunt them with a performance like this. But unfortunately for Irving, Jason Tatum made sure that the home fans at the TD arena had the last laugh.

Despite the defeat, Kyrie’s performance has not gone unnoticed, and appreciation from the NBA community, especially LeBron James will only encourage him to perform even better in the upcoming matches. Even though the Nets are only down one game in the series, they need Irving to come out all guns blazing if they are to have a chance of progression.