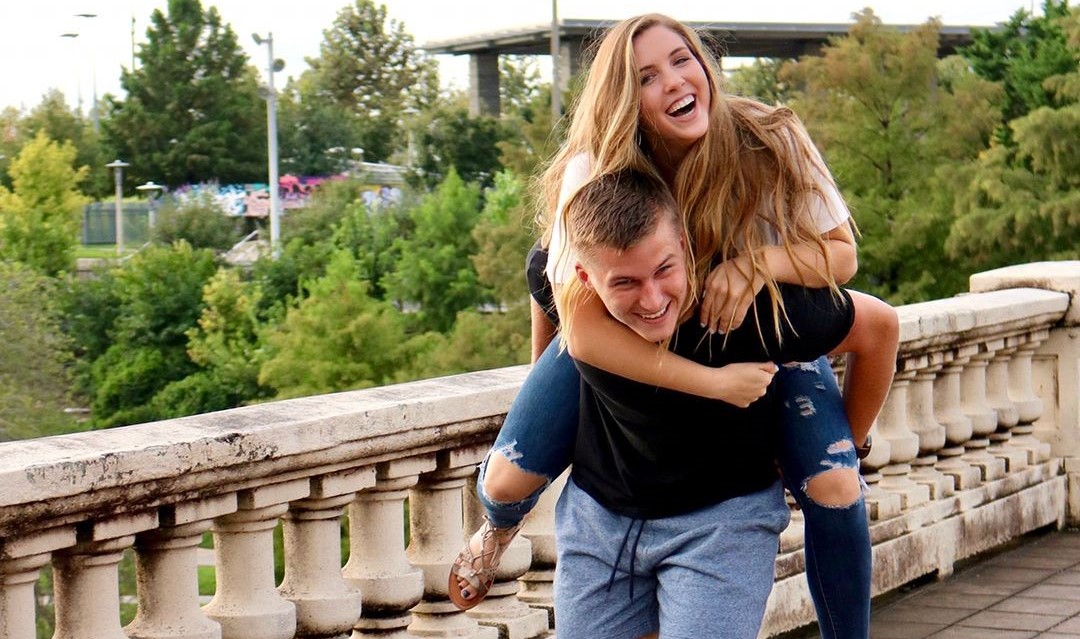 A fourth-round pick out of Western Kentucky in the 2022 NFL Draft, Bailey Zappe, the backup rookie quarterback who got the start because of Mac Jones’ injury, has continued to impress since making his NFL debut in early October, and he led New England to a dominating 29-0 win over the Lions.

Talented and spirited, Bailey Zappe is not only committed to his career but also passionate about his dating life. Everyone finds it difficult to balance their professional and personal lives, but it’s just a toy train to Bailey because he can ride on the double track of life simultaneously. He has a companion on his lifelong journey, and she is none other than his beautiful girlfriend, Hannah Lewis.

The level of dedication and romanticism shown to one another at such a young age is extremely rare these days. Zappe and Hannah have proven everyone wrong, and their love for one another stands as a role model in the eyes of this generation.

Let’s explore further their romantic involvement as well as Hannah, the lady who encourages Zappe to keep his chest up in the field.

Hannah Lewis was born in Sherman, Texas, on October 18, 1997, and she was also raised in Texas. Then, she went to Plano West High School and was a two-year letter winner under head coach Brittany Bridge. Lewis graduated with a BBA in Business Administration and Management in 2020. 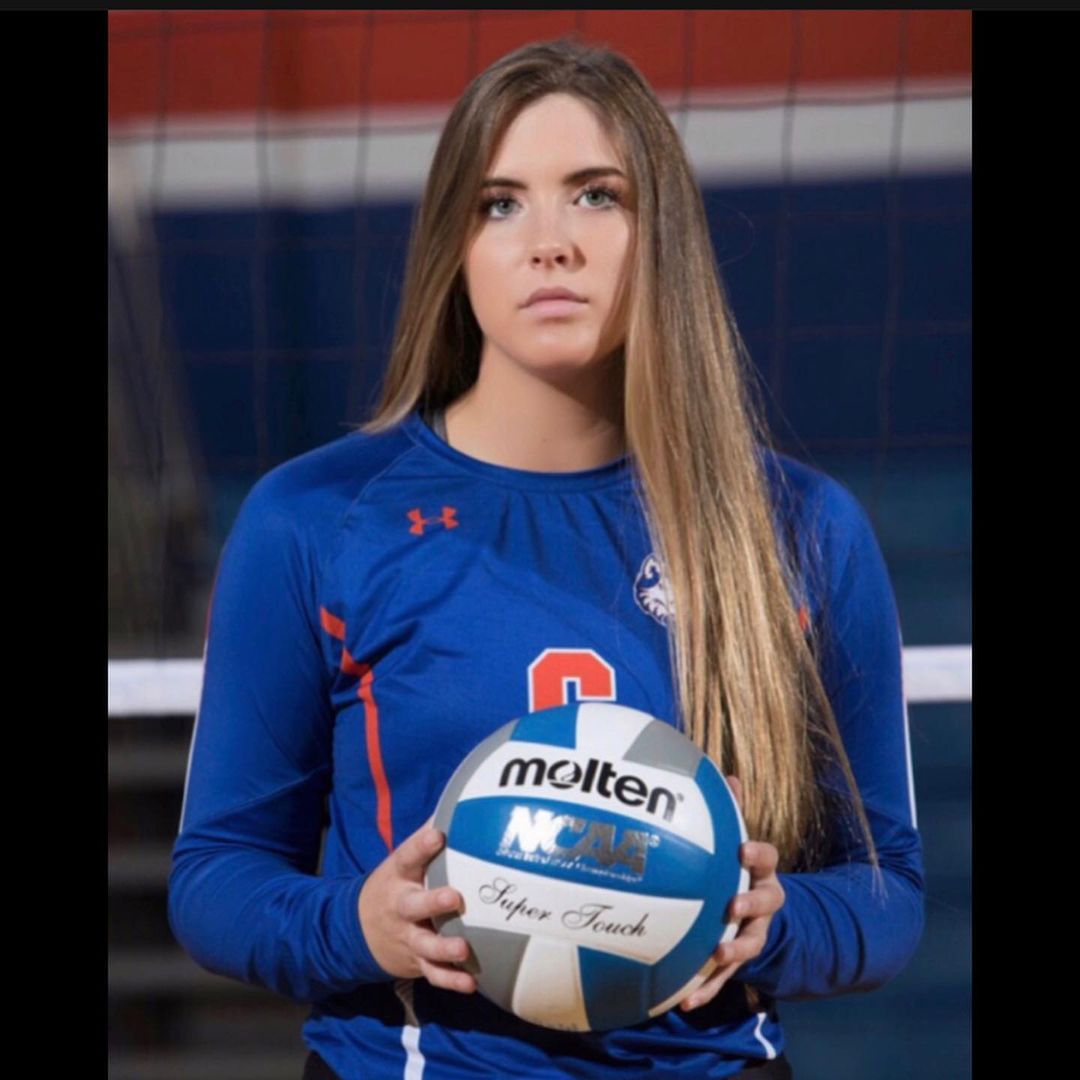 Jerry Lewis, her father, is a medical professional in Frisco and a former collegiate wrestler at Oklahoma. Debbie Holland Lewis, her mother, owns a medical spa. She is one of Jerry and Debbie Lewis’ five children.

What is Bailey Zappe’s girlfriend profession?

The Plano West High School volleyball team included Hannah Lewis. As a senior, she was also team captain and president of the Fellowship of Christian Athletes. She later played volleyball for three seasons at Houston Christian University, which used to be called Houston Baptist University. 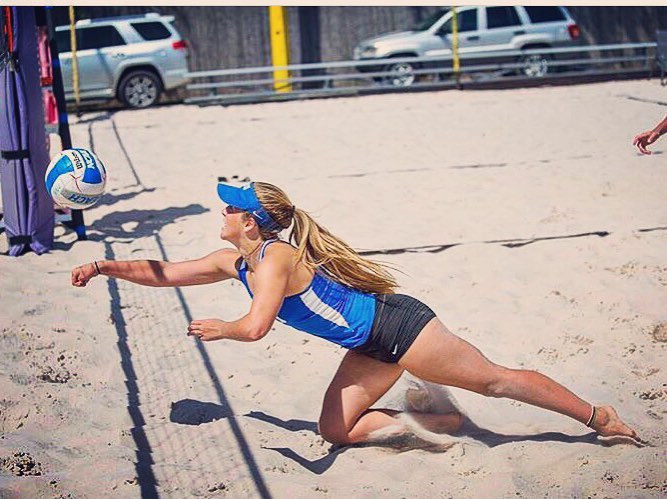 After graduation, she found work as a medical assistant at Lewis Pain and Physical Medicine, a general medical clinic. Now she is working as well as living in Massachusetts.

Even before Zappe made his NFL debut, he and Hannah had grown close and known each other since they were adolescents. These two lovely swans are meant to be together, and their eagerness to swim in the pond of love can make others envious. In a little while, let’s find out how they first met and ultimately became involved in a relationship.

They made their first eye contact during a match in 2017. Hannah deeply observed Zappe’s wolfish eyes and realized right away that this trickster may be a con artist in the field, but he won’t stand up to Hannah’s beauty. This Alpha and Luna wolf began dating after recognizing they had met their soulmate.

During the days of Houston, their love became condensed. They even don’t realize how two and a half years have gone, and like every other bald eagle, they also have to be separated. At last, Zappe transferred to Western Kentucky University for the 2021 season.

The quarterback and his girlfriend kept their long-distance relationship going. Lewis relocated to Massachusetts after the Patriots selected Zappe in the 2022 NFL Draft. Their relationship has outlasted the distance and is still alive and kicking.

Did Bailey Zappe date someone before hooking up Hannah Lewis?

Bailey Zappe is a very one woman-focused guy. He is always shown with his one true love, not only in his earlier years but also now. He simply cannot imagine having anyone other than his girlfriend as a partner. Bailey Zappe has stayed focused, interested, and excited up to this day. In and out of the game, this type of person adheres to these rules. In the dating world, these young couples are setting a new standard of commitment and loyalty.

After everything Bailey has done for their relationship, would you mind asking him how devoted he is to his girlfriend? Don’t you agree it would be ridiculous?

The couple is too young to start a family. However, we never know when it is best for them to have a child. As an audience, we may anticipate hearing the wonderful news in the following days. 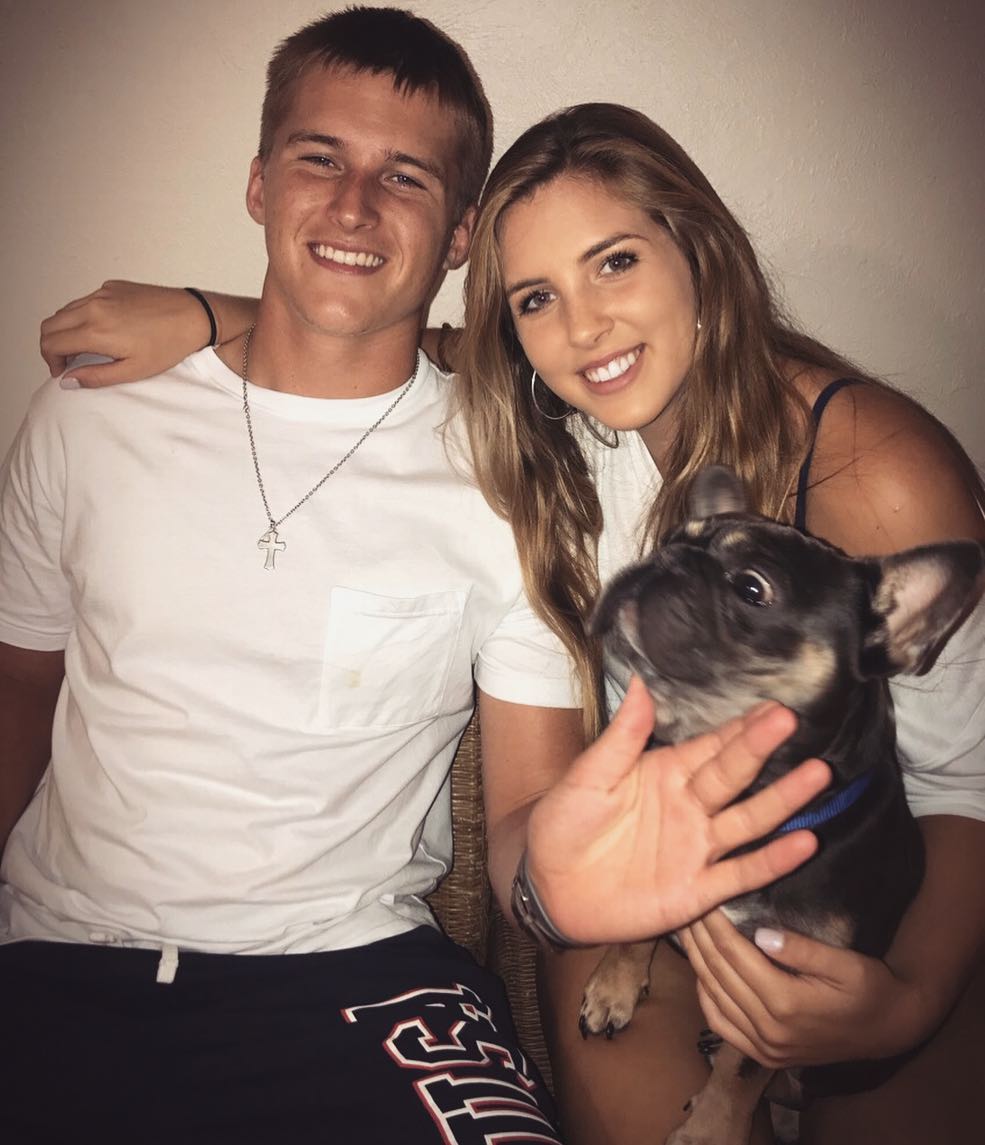 What benefits Hannah Lewis got hooking up Bailey Zappe?

When a man lacks motivation, it is difficult for him to push himself beyond his limits. He was never alone in his ups and downs. Hannah was always seen cheering for her love, from college football to NFL participation. Hannah is a self-sufficient athlete who earns enough money to cover her own expenses. Despite her duties, she is always willing to help Bailey with his job and personal life. 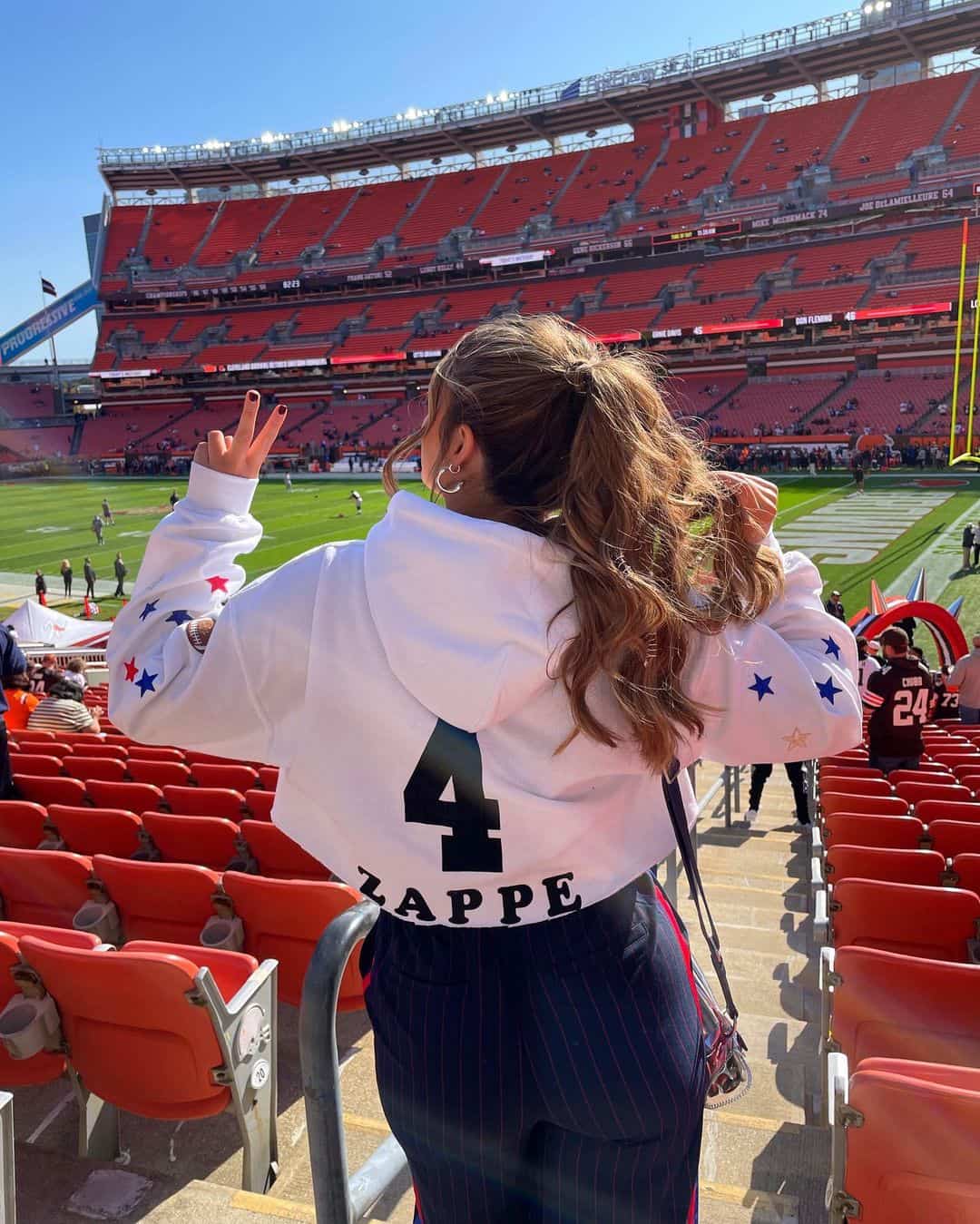 If anything is more important to her than Zappe, she will die on that day. Because she loves Zappe, Hannah puts her ahead of everything else. If there are mirror universes, they will be there, calling for each other. Hannah loves Zappe’s very much and doesn’t want to leave under his wings. 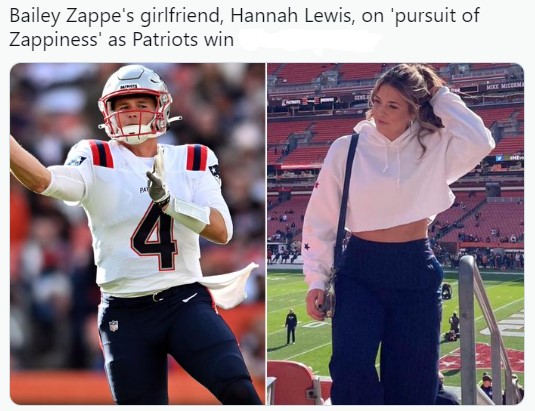 On the sidelines, she has been seen in the stands wearing a jersey named Zappe in every match. Anyone who follows her on Instagram will notice that she has posted a significant number of photos of them together.

What is Bailey Zappe’s girlfriend net worth?

Hannah has supported herself by working as a medical assistant in various medical facilities over the years. Annual salaries for medical professionals in the United States typically range from $35,527 to $41,612 per year. Additionally, she was a volleyball player until the year 2019. Her net worth is estimated to be $1 m.

Bailey Zappe has never been the world’s most amazing kid with natural talent. He has only made it this far because he has worked hard and stuck with it. His girlfriend, Hannah, has always been there for him. They’ve been together for more than five years, and in that time, Bailey has written his name into NFL history. 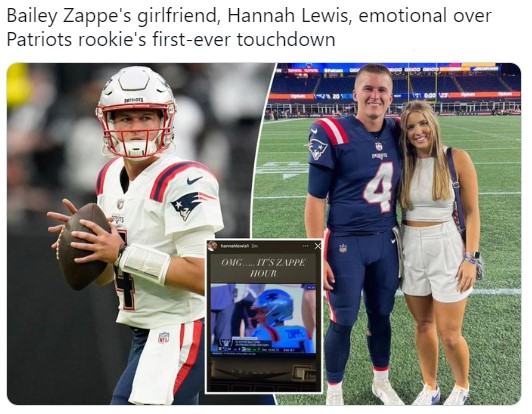 While playing against the Lions, rookie Bailey Zappe put on quite a show. Ultimately, he completed 17 of 21 passes for 188 yards, a touchdown, and an interception. The five yards he gained on the ground were added to his total. The former Western Kentucky player didn’t have spectacular stats, but he did more than enough to help his team win. And it happened because his guardian angel is still there with him and will be forever.