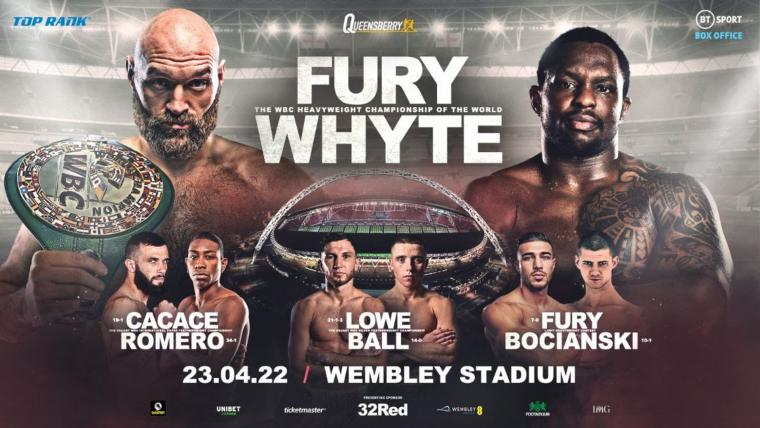 Tyson Fury will take on challenger Dylan Whyte at Wembley. The highly anticipated main event with a packed undercard and the WBC belt on the line! Details of fight revealed:

The all British heavyweight championship clash between WBC champion Tyson Fury and interim champion Dillian Whyte is set to take place at the Wembley stadium on the 23rd of April, 2022. Whyte became the mandatory challenger to Fury’s crown after he regained his interim belt in a rematch against Alexander Povetkin in 2021. The British elites are ready to face off on home soil. This will be Tyson Fury’s first match in his native country since August 2018.

The fight between “The Gypsy King” and “The Body snatcher” was left to hang until the deadline day, with White only signing at the very last moment. The bout was finally made official and is set to materialize this month.

The build-up to the fight is heating up as Fury has continued his usual banter and trash-talk on social media, trying to wind Whyte up before their clash.

Whyte is to face his toughest opponent yet, with the undefeated Fury showing no signs of relenting in recent fights. The closest Fury had come to losing was in his first fight against Deontay Wilder, where he was viciously knocked down. But Fury eventually beat the count and surprisingly won the rest of the round to take the fight to a decision draw.

Tyson Fury has been on a winning streak ever since, beating the dangerous Wilder convincingly on two separate occasions. Rumors of Fury hanging up his gloves for good have been flying around the boxing community for quite a while now. There is a possibility of Fury announcing his retirement after the Whyte fight, whatever the result may be.

With the main event set to produce fireworks here are the Date, Time, Tickets, PPV price, TV channel, live stream, and an undercard of the PPV revealed.

Fury vs Whyte: Date and Time

The fight is scheduled for Saturday, April 23rd, 2022. It will take place at the national stadium of England, the Wembley.

The undercard will commence at around 6 P.M BST, with the ring walks for the main event of the evening to be somewhere after 10 P.M BST. 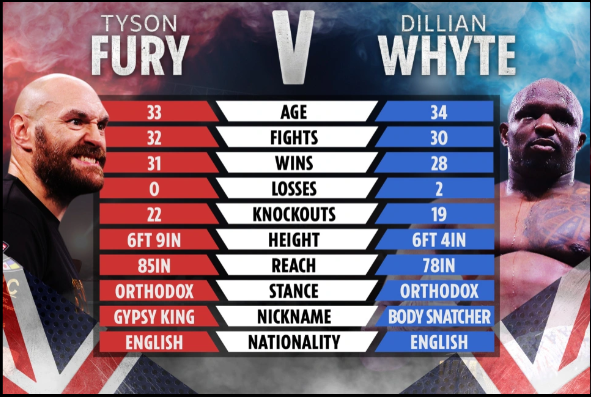 The main event of Fury vs. Whyte will be broadcast on ESPN+ pay-per-view, It will be aired live on ESPN+ in the US.

The Tickets for this match were sold out rapidly with more than 85,000 of 90,0o0 selling on the first day.

The undercard to Fury vs Whyte is set to feature another boxer from the Fury family! Tommy Fury, the younger brother of Tyson is set to return to the ring in a light heavyweight bout. Tommy was previously set to fight Jake Paul in a massive PPV but had to pull out due to injury. All fights in the card are detailed below: 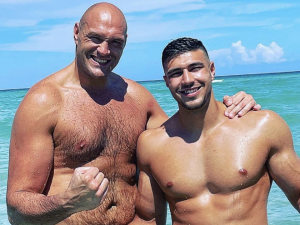