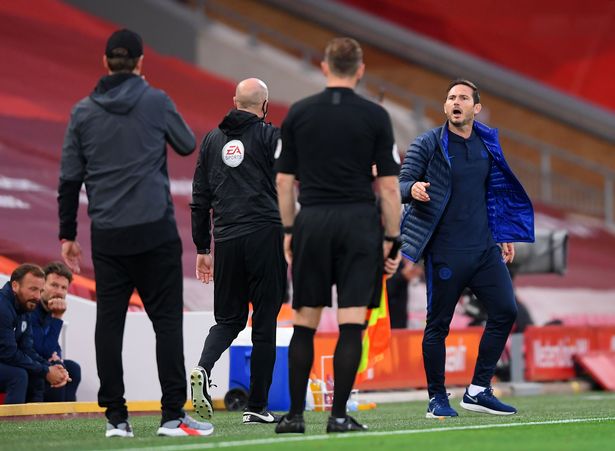 The Chelsea vs Liverpool game was quite a spectacle as the former needed just one point to get a spot in the Champions League. Starting with the same lineup, Chelsea coach Frank Lampard was quite hopeful of getting a point at least.

However, things did not turn out quite well for his team as they were 1-0 down before the 24th minute.

On 36th minute of the game, Kovacic brought down Sadio Mane just outside the box and referee gave a free kick to Liverpool. Frank Lampard, the Chelsea boss was extremely disappointed with the decision. The camera showed how Frank Lampard was talking to the fourth official. Jurgen Klopp from distance tried to calm him down but Frank Lampard was very angry and was disappointed when Trent scored and made it 2-0 for Liverpool.

Chelsea had brilliant second half. Pulisic tried a lot, but couldn’t help how team to win. Chelsea lost the match 5-3 and the last game week will decide Chelsea future.

In the post match conference Chelsea boss congratulated Liverpool but had some tough words. He said, “For me, it wasn’t a foul from Kovacic, and there were a lot of things that weren’t going our way. But I’ve not got a problem with Jurgen Klopp. The way he managed this team has been fantastic.” He further added, “Fair play to Liverpool Football Club, they’ve won the league, but also don’t get too arrogant with it. That was my point, but it’s done. In match play, you can get emotional and that was it.”

With Champions League spot on the grab, how Chelsea will approach towards the next game is something we all are waiting for. Chelsea Boss said, “It’s going to be huge. We know the situation, it’s in our hands to get the right result against a very good Wolves team. We have to deal with the pressure of moments like this if we want to get to where we want to be.”

Only time will tell what happens to Chelsea and who grabs the Champions League spot! Leicester City, Manchester United and Chelsea, each team has it on their hands.