Chelsea vs Liverpool: Antonio Rudiger transfer on the cards with centerback left out of matchday squad 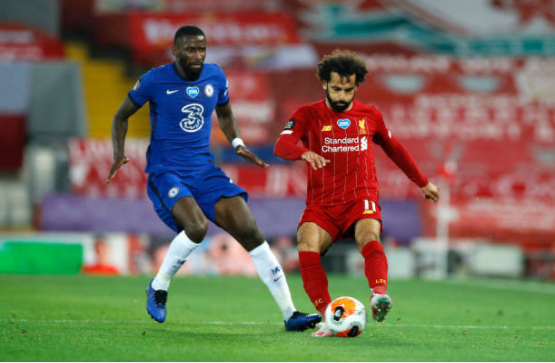 Antonio Rudiger transfer news is making waves as he has been left out of Chelsea’s matchday squad for today’s game against Liverpool. The German centerback did not feature in Chelsea’s season opener against Brighton either.

Chelsea and Liverpool both got off to chaotic starts to the Premier League campaign. Liverpool needed a late winner from Mo Salah to see off Leeds 4-3.

Chelsea were put in trouble by Brighton in their opener, though the Blues secured a 3-1 win. Both teams will be integrating new players into their setup, with Thiago arriving in the past week at Merseyside.

The Blues lined up Andreas Christensen along undisputed starter Kurt Zouma for the Brighton game. Anthonio Rudiger transfer news will be in full swing following his omission today.

While the 27-year-old played a key role in landing Chelsea fellow countrymen Timo Werner and Kai Havertz on transfers this summer, his form has been on and off the past season. He was error-prone last season, and was one of the main reasons why the Blues had such a leaky defense.

The Telegraph reports that Rudiger has been in touch over a possible move with his agent. The former Roma stopper has 2 years remaining on his contract. There is no news regarding Chelsea management contacting him over a possible extension.

Antonio Rudiger left out of Chelsea squad for Liverpool game and could raise doubts over his future – @Matt_Law_DT reports https://t.co/UfA3FT1Jvx

Given that he’s clearly going to be Lampard’s fourth choice centerback this season, the club is looking to quell any discontent by selling him on. It is unclear which clubs will move for an Antonio Rudiger transfer should he be made available.

Goalkeeper Kepa Arrizabalaga will have one last lifeline in the starting lineup. Rennes goalkeeper Edouard Mendy’s move to Stamford Bridge has been confirmed. He’s likely to nail down the starting berth based on his form.

Chelsea will be bolstered by the arrival of Mateo Kovacic, declared fit for today’s clash. Liverpool, on the other hand, have left Thiago on the bench in an attempt to ease him into the English game.

Liverpool will be starting Fabinho at the center-half berth following injury to Joe Gomez. The England international is not in the matchday squad.

The Reds are the more successful side historically. The Merseysiders have 81 wins to the Blues’ 64, and did the Premier League double over them last season. The Blues, on the other hand, disposed of the Reds in their FA Cup clash en route to the Final.