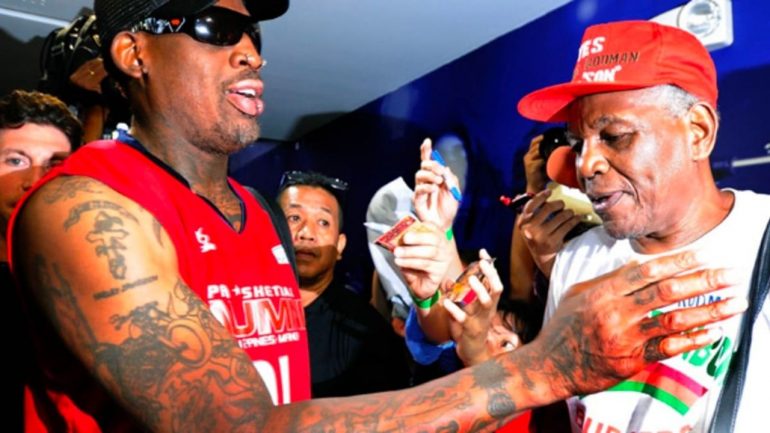 Dennis Rodman is well-known for his crucial contribution to the Chicago Bulls’ second three-peat, and he is often referred to as the defensive cornerstone for a trio that became a dynasty in the 1990s. Along with Michael Jordan and Scottie Pippen, Rodman was the third member of the bulls’ “Three Musketeers”.

During his prime, the worm rose to become one of the NBA’s finest players, but he had to do it all alone because his father abandoned him at a very young age. He didn’t see his father Philander Rodman for 42 years!

Dennis went to Manila, the Philippine capital, for an exhibition game in the summer of 2012. Horace Grant, Scottie Pippen, and other former Bulls players played alongside Rodman on an NBA Alumni team. Rodman asked his father to witness the match during a news conference prior to the game. “I’ve been trying to meet him for years. And then last night, boom, I met him. I was really, really happy and very surprised.”

So far, the above story might seem like a fairy tale, as a son just reunited with his father after 42 years! But, hold your horses for the climax, as the second half is actually a horror story. Ladies and gentlemen, Philander Rodman Jr., father of Dennis, has 29 children with 16 different women! Additionally, he spent his entire life without a father and never received assistance from Philander, which is why he chose to maintain a distance from him. “I don’t hate the guy that brought me into this world. The fact is, if I saw him, I’ll just tell him, ‘You know, you’re a friend of mine.'” He said. Rodman’s father died at the age of 79 due to prostate cancer in his hometown.