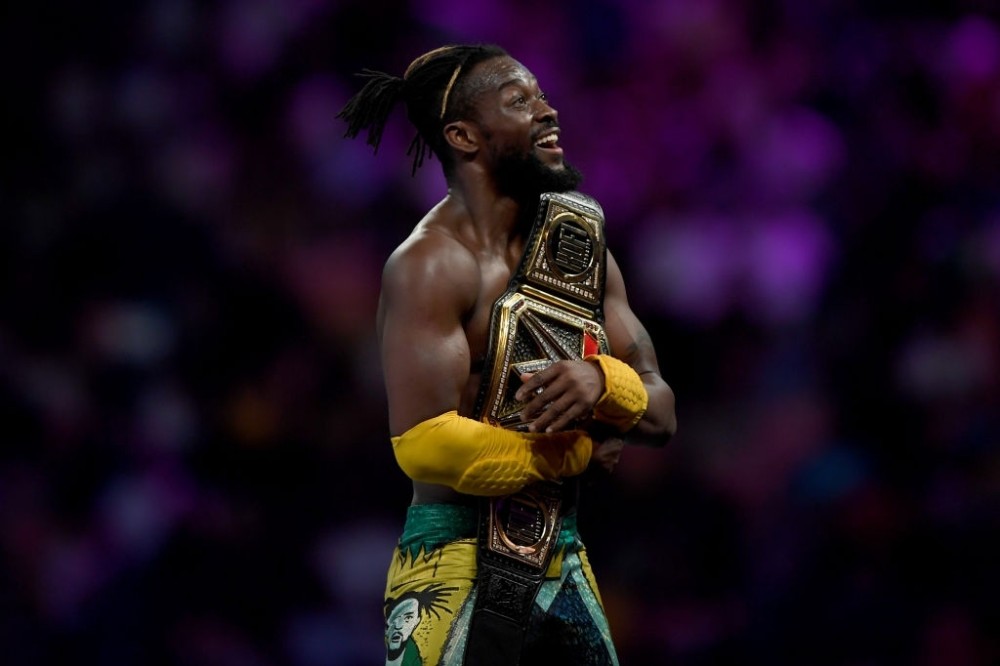 After staying out of action for 3 long months, Kofi Kingston is finally back in WWE. And yes, he did mark his return in style while beating Cesaro and Nakamura for the Smackdown Tag team championship, along with Xavier Woods. Hereby, we are discussing some of the most memorable Kofi Kingston WWE championship victories over the past 14 years of his association with WWE.

This victory came in the wake of Kofi’s defeat to Brock Lesnar during a WWE championship on SmackDown. Still, it paved a new way for Kofi’s future journey at WWE.

Right within few days of losing his WWE championship to Lesnar, Kofi came out victorious with his team- ‘New Day’ at the Smackdown Tag team championship

This victory holds some big significance to his WWE career as many were expecting him to bid adieu to the Sports entertainment brand after his defeat to the beast.

These were the early days for the rookie Kofi Kingston in WWE. So,  performing along with the legendary CM Punk in a tag team championship was quite a special moment for any WWE superstar.

Luckily, both superstars were sharing amazing chemistry in and off the ring and this is how they went on to win the world tech team championships.

This also came over as the first Kofi Kingston WWE championship victory. Moreover, he credited Punk for motivating and inspiring him during a tough match during his earlier days in WWE.

It was the time when the ‘Bludgeon brothers’ were creating havoc across Smackdown while crushing every tag team around. So, after claiming a disqualification victory over the brothers at the summer slam event, Kofi Kingston,  along with New day, was provided with another shot to the title in the following week’s Smackdown event.

Fortunately, both Kingston and New Day made the most of this opportunity after defeating the Bludgeon brothers in a hard-fought match. This was the third Kofi Kingston WWE championship victory with the  New day and one of the most memorable ones of his career.

#7. Intercontinental championship (Over the limit, 2010)

By this time, Kingston became an established name in the WWE roster. Still, the only thing he was missing is a championship belt around his waist. This was when he got into a clash with the young heel Drew McIntyre who was holding the Intercontinental championship for few months.

As McIntyre was stripped off with the Intercontinental championship, Kingston secures the same after battling it out in a tournament including some of the other superstars in the WWE roster.

Unluckily, his victory was overturned by  WWE Chairman Mr. McMahon and the championship was again assigned to Drew McIntyre. Still, Kingston did manage to get a shot towards the same title, and this time around, he put his steps on the podium with all the pride and honor after defeating McIntyre in a one-on-one match.

This was the time when New day started off with a fresh feud with ‘the Usos’ while defending their Tag team title. Eventually, both the teams went into a tag team match at the Battleground PPV. Kingston and co trounced ‘the Usos’ with some commendable retaliation and became the first team to claim both Raw and SmackDown tag team titles.

2009 was the year when Kingston started his career with the Red brand. Still, right within no time of his arrival,  he went on to win his first United States Championship by pinning down MVP during the Monday night Raw episode.

This came out as a special victory for Kingston and further helped him to mark his presence as a solo performer.

Till this time, New day was only known as a team with all the goofy antics and senseless gimmicks. But yes, a  victory at the WWE tag team championship at SummerSlam made everyone noticed their presence on the big stage.

Right from that point, New Day proved themselves as a power to be reckoned on the WWE roster.

Weeks before the summer slam victory, Kingston and  New day marked their arrival on the prime time with their maiden WWE tag team championship title at Extreme Rules PPV.

Up until now, none took this team that seriously and they were largely been deemed as another ‘baby faced’ performers on the show. This victory made every WWE fan believe in their capability to battle it out for the major championship matches.

By this time Kofi Kingston already proved his mettle in the ECW. Still, the moment this ‘Jamaican sensation’ made his entry to the Monday night Raw, everyone was doubtful of his capabilities as a hardcore performer within the ring.

Going against the odds, Kofi challenged Chris Jericho for the Intercontinental championship at the Night of champions. Not just that, he eventually claimed an unprecedented victory against one of the most iconic WWE superstars.

This was, probably the biggest landmark victory in Kofi’s career. By this time, none would have believed that a superstar of Kofi’s stature can pin down Daniel Bryan in a WrestleMania match for the WWE championship.

After claiming this victory, Kingston became a ‘triple crown’ and ‘grand slam’ champion. Moreover, he turned out to be one of the only black wrestlers to put their hands on the coveted championship.

After reeling down with a string of injuries in the past, Kofi is back in action. Still, whether or not he goes out of his ‘tag team bubble’ to challenge for the WWE universal title, is yet to be seen.

WWE Real or Fake? Let’s Explore the Unknown Facts Rolling Inside the Ring
Sami Zayn vs Bobby Lashley: Can the ‘All Mighty’ defend his WWE United states championship title at the Survivor series?