10 Wrestlers who have fought in real life 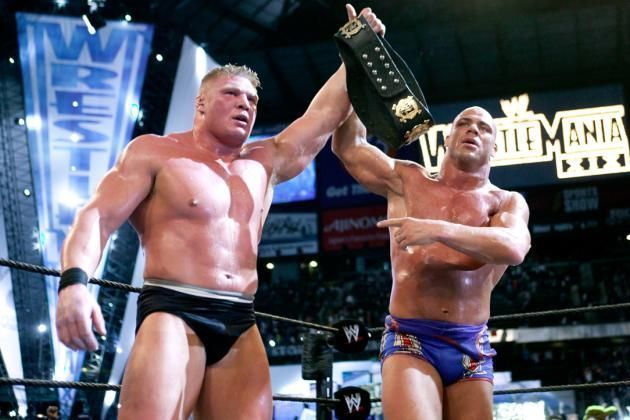 Wrestling is a pure mixture of entertainment and risk. Wrestlers do a lot of work to impress the people watching them and this includes taking major risks as well. They put their bodies on the line to earn respect from both the management and the wrestling fans. In their quest to success, wrestlers fight with each other to build a name for themselves. Even though these rivalries are purely a result of scripting, sometimes there’s a beef between two wrestlers that don’t always end well.

As we said, wrestlers don’t fear to risk their bodies, as they do it every day, so why would they fear to get into a real-life fight with another wrestler? We have heard rumors of many backstage fights in wrestling but how many of them were true? And did you know the full story behind them? Probably not. But today, here at Sportszion, we will be looking at 10 wrestlers who got into a real-life fight.

In case you’re wondering about Rebe Sky, she’s the wife of Matt Hardy of WWE. The fight between Awesome Kong and Sky erupted when they both were working for TNA.

Sky was changing in the locker room, and Kong was there wearing her ring attire as well. She took it as a disrespect to her, as she believed Sky shouldn’t be changing when she was there. This led to her kicking Sky out of the locker room, and when she came back for her belongings, Kong grabbed her by her throat. It was a mistake from Kong’s side as Sky’s son, Maxel, was present there and saw everything.

Later, TNA fired Kong from the company and we can assume that this beef hasn’t ended completely yet. Kong now works for AEW and is a prominent figure in their women’s division.

Before Shawn Michaels became a major individual star in WWE, he was in a tag team with Marty Jannetty known as The Rockers. Both superstars were young enough to set off the ground but they weren’t on good terms with each other.

While we don’t know why they started to fight, but it’s believed that Roddy Piper had said something to them. If it hadn’t been for Randy Savage’s intervention, both would’ve been arrested by the cops for their actions too. Soon after this incident, Michaels left WWE but the pair soon patched up and The Heartbreak Kid rejoined the company.

He went on to become a major tag team and a singles superstar in WWE but on the other hand, Jannetty didn’t achieve much in his wrestling career. We wonder how far he would’ve come if things had taken a different turn.

#8. The Great Khali and The Big Show

The Great Khali was one of Vince McMahon’s experiments to expand WWE’s business in India during the late 2000s. At one point, WWE booked a tag team match between Chris Jericho and The Big Show vs The Great Khali and The Undertaker. This match took place during a live event in Arecibo, Puerto Rico.

In the middle of this bout, Khali used one of Big Show’s move, Overhead Chop, which caused the WWE veteran to lose his cool. He later confronted Khali backstage where the two started arguing. All of a sudden, Show landed a punch to Khali’s jaw and received one from him in return as well. Both wrestlers somehow tripped on a chair and fell, with Khali on top of Show. However, Show denied losing the brawl and excused that it happened only because Khali fell on top of him. But as per Jericho, this wasn’t the case at all.

Well, Chris Jericho hasn’t only witnessed a real-life fight backstage, he got into one as well. Goldberg and Jericho were never on good terms since their WCW days and as the former Universal Champion had refused to work with him because Jericho was beneath him. Once, WCW booked Y2J to lose against Goldberg in a squash match, but this time he was the one to refuse it.

When Goldberg joined WWE in 2003, he had a confrontation with Jericho and he was accused of talking trash on the internet about the former. Jericho refused to accept the claims but Goldberg wasn’t having any of what he said and then, he went on to chock him. Y2J lost his cool and used the front face lock move, followed by body scissors that were enough to grant him an easy victory. Both superstars never buried the hatched with each other but since this incident, nothing got physical between the two.

Everyone knows about the infamous Plane Ride from Hell in 2002. Following the end of a European tour, WWE wrestlers were flying back to the United States from Great Britain. During the flight, Curt Hennig ribbed Brock Lesnar to decide who’s a better fighter between them. When the two locked horns, they slammed each other to the emergency door and had it been opened, tragedy would’ve happened.

Fortunately, other superstars sitting on the plane separated the two from each other. Later, WWE fired Henning, while Lesnar retained his job. In a 2016 ESPN interview, The Beast talked about his mid-air fight with Hennig and said:

“Being stuck on an airplane for seven hours on an overseas trip – what else are you gonna do, besides maybe pass out and fall asleep, or get into trouble? We did both.”

It’s believed that once you spend enough time with someone, you start to like them. But this wasn’t true for Tracy Smothers and Tom Prichard who worked with each other for a long time. Both made their names in Smoky Mountain Wrestling in the 90s. They both started working for Vince McMahon’s WWE soon but once on their way to a show, both started to fight with each other.

Prichard believed that Smothers isn’t a safe in-ring worker and that he intentionally hurt his opponents in the ring. Smothers confronted him about this and their brawl started on the road. Luckily, the cops arrived at the time and avoided any tragedy from happening. The duo lied that they were just preparing for their upcoming wrestling match, and the officers believed it. But they started fighting again and this time they received a warning.

“You don’t do that in my town! You got thirty seconds to get your asses out of here or I’m taking you all to jail.”

Both were getting late for the show so they left without creating a scene. 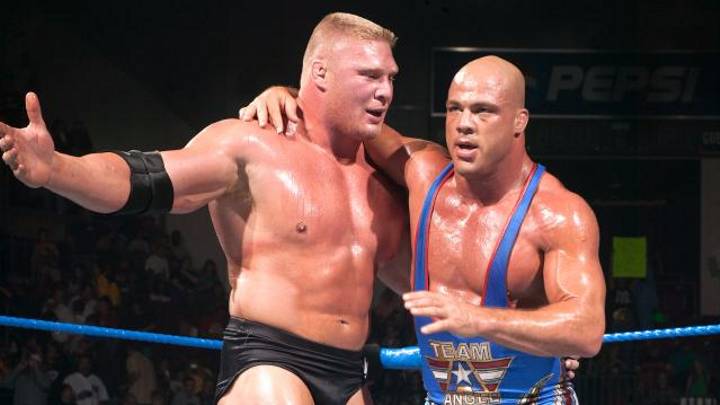 Kurt Angle was one of WWE’s main event superstars in 2001 when he picked up a fight with a young Brock Lesnar. Their fight took place in South Dakota (though some believe it was before a Raw taping in South Carolina). Angle had heard Lesnar saying that he can beat him easily in a fight, so he challenged him.

Their bout happened after Lesnar finished a practice session with The Big Show. Gerald Brisco and Jim Ross were eyewitnesses of this match and as per Brisco, Angle had won the fight. Here’s what The Olympic Gold Medalist said about the same:

“We had the showdown. It was close. It really was. He had 90 pounds on me, but I probably took him down into the ropes a good 7-8 times. He used the ropes to say we’re out of bounds. That’s OK. I did take him down once. He didn’t take me down at all.”

In 2006, SmackDown was continuously beating Raw in terms of ratings. The Blue Brand was producing content that was fulfilling the fans’ demands. Batista was one of the biggest superstars of the show, at that time, and he liked to brag about himself in front of other talents. He credited himself for SmackDown’s success but Booker T wasn’t having any of it. He confronted Batista about this and their argument started, which lasted for nearly 5 minutes.

Then, the two got into a fistfight and as a result, Booker T had a black eye whereas on the other hand, Batista was bleeding from his face and there were many cuts too.

Speaking to WrestlingInc in 2018, Booker T revealed that he and Batista had settled their disagreement:

“You know in professional wrestling, I’m sure in combat sports there’s always gonna be testosterone,” Booker T said. “Men a lot of times don’t agree with each other and that’s all it was. It was a disagreement. Him and I, we settled our disagreement. If I saw him today, he’d get a big hug and I’d say, ‘what’s going on?’ You know? He’s a man, just like I am.”

#2. The Nasty Boys vs Ken Shamrock

UFC legend Ken Shamrock isn’t the type of person you would ever want to pick up a fight with. He’s a Mixed Martial Artist who can easily demolish someone in a matter of seconds. However, long before becoming an MMA fighter, Shamrock was a wrestler. He used to work for South Atlantic Pro, an independent wrestling promotion, where The Nasty Boys were also working.

This incident happened in October 1990, when Shamrock and Brian Knobbs and Jerry Sags of The Nasty Boys were in a bar. Knobbs and Sags, both drunk, grabbed a woman’s breasts. The first time they did this, Ken didn’t react. But when they did it again, Ken confronted them about this but before anything could happen, the bouncer threw Knobbs and Sags out of the bar.

Later, Ken knocked at their hotel room door, and according to a rumor, he started beating Knobbs, as a result of a beef with him. But he was hit by phone from behind and was then beaten badly.

“[The Nasty Boys] dragged me outside to throw me over the railing from the second floor to the ground below. Had [Col. Robert Parker] not stopped them, I wouldn’t here today.”

Vince McMahon was never a big fan of Kofi Kingston. Long before he became WWE Champion, he had a confrontation with Vince during a flight. This one wasn’t as brutal as the previous stories but because The Chairman of WWE is involved, we will look at it.

Vinnie Mac had reportedly joked with Kingston and said that ‘maybe one day you will get over’. This was a disrespectful statement for Kingston but he didn’t do anything about it right away. When the flight had landed, Chris Jericho confronted The New Day wrestler about this and advised him that it’s his only chance to stand up for himself; otherwise, Vince will never have any sort of respect for him.

Listening to the veteran wrestler, Kingston confronted Vince and their brawl started. A double leg takedown took Kingston down and without anything else could happen, their fight ended. The CEO of WWE was impressed with Kingston for standing up for himself and it’s probably one of the reasons why he respects him so much, even today.