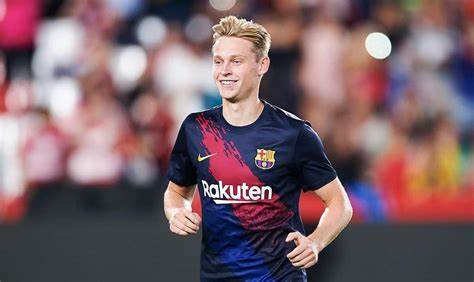 Manchester United are interested in signing Frenkie De Jong from Barcelona, as they plan a summer overhaul of their squad.

With Ajax boss Erik ten Haag set to take over at Old Trafford next season, a summer overhaul is expected at Old Trafford. One player that is on their radar is Barcelona’s Frenkie De Jong. The Dutchman played under ten Haag at Ajax. He was one of the key components of Ajax side that reached the Champions League semi-finals in 2019.

On the way to the final, De Jong dominated games against heavyweight opponents like Juventus, and Real Madrid. That was enough for Barcelona to splash the cash on the Ajax academy graduate. They signed him for £65million in January 2019.

Although many reports claimed that the deal was”95% done”, recent reports suggest that De Jong is keen to prolong his stay three-year stay at the Camp Nou.  De Jong is yet to fulfill his potential at Barcelona, and it was rumored to that Barcelona were keen to cash on him.

If United do miss out on De Jong, they will have to line up alternatives. The midfield department has been an Achilles heel for the Red devils. One such player who has the potential to fulfill the demands is Lovro Majer.

The Croat, who plays for French club Rennes,  has been dubbed the “Next Luka Modric”. he could be available for a small sum of  £16m this summer.

Majer has been one of the standout names in Ligue 1 this season with Rennes. He has single-handedly dictated the tempo of matches. He is a technical midfield player, who loves to orchestrate play and dominate the ball. That is the type of dynamism that the Old Trafford based side have lacked in recent years.

Thomas Tuchel Insists on Chelsea Being the ‘Bad Guys’ than Gain ‘Sympathy’ Like Liverpool
The Nominees For The Premier League Player of The Season Have Been Revealed and There Are Some Players Missing!