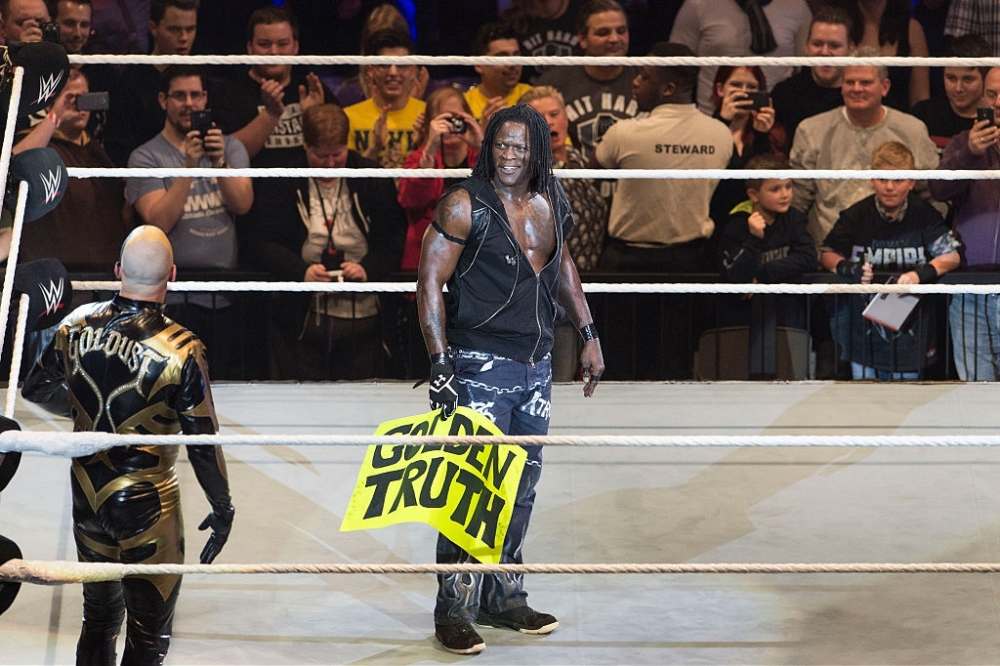 There’s no denying the fact that R-Truth is the greatest 24/7 Champion of all time, a championship, that can be defended anytime anywhere in the presence of a WWE referee.

In many ways, R-Truth alone made sure that the 24/7 title stays relevant to the WWE. Since its unveiling by Mick Foley in May 2019, the WWE 24/7 Championship title hasn’t been away from Killings for very long.

Now, after his 42nd title win, he took himself to a ridiculous height where it’s really tough to top him.

Voted as their favorite championship in June 2019 by WWE fans, the 24/7 championship has always been a hard one, and R-Truth has defended it very well over the year. With over 15 years of experience in WWE, he has been a United States Champion, Tag Team Champion, Hardcore champion, and of course, a 42 time 24/7 champion.

Also known as Ron “The Truth” Killings, R-Truth is not just a wrestler, he is also a rapper and an actor. He was born in Williamsburg, South Carolina, in January 19, 1972, and his full name is Ronnie Aaron Killings. Ronnie was raised in Charlotte, North Carolina and attended Harding University High School.

During his high-school days, Ronnie competed in football and was very talented in it; as he received college scholarships, only to turn them down to pursue his music career.

To support his music career financially, he used to sell cocaine and was arrested four different times. Eventually, after serving for 13 months, he left that life of him behind.

R-Truth was first convinced by Jackie Crockett to become a professional wrestler. But he turned him down to pursue his music career. However, after working on music for two years, Ronnie expressed his interest in professional wrestling to Crockett, thus, R-Truth 24/7 champion’s wrestling career begins.

Killings began his wrestling career in 1997 as a manager in PWF. For the next three years, he traveled and trained under Manny Fernandez.

In the year 1999, Killing signed a two-year developmental contract with the WWF and went to the Memphis Championship Wrestling. Soon he got promoted to the main roster and was put in a tag team, with Brian Girard James, known as the Road Dogg. On November 13, 2000 Killing made his WWF debut by attacking William Regal during a match at the episode of Raw is War.

In 2002, he joined the Xtreme Pro Wrestling and teamed up with Saleem Jihad and Raphael Muhammad under the ring name Malik Shabazz. Later that year, he left the promotion.

In June 2002, Killings signed with the Total Non-stop Action Wrestling promotion and appeared on the weekly pay per view TNA as K-Krush. There on July 10, in a squash match, he defeated Hermie Sadler.

However, the decision was overturned because Killing continued to attack Sadler even after he was announced the winner. On July 17 TNA pay per view, Killings stated that with anger that he had been held back and that he was to be referred to as, “The Truth.” Eventually, he began using his own name as Ron “The Truth” Killings.

From 2003 to 2005, Killings teamed up with B.G. James and Konan and formed a faction called 3 Live Kru. On August 13, 2003, the Kru wrestled as a unit for the first time and they defeated The Disciples of the New Church.

After the breakup of the 3 Live Kru, Killings wrestled in various tag teams, working out a release deal from the company in December of 2017.

In the year 2008, Killings re-signed with WWE (World Wrestling Entertainment). And on August 29, Killings re-debuted as R-Truth on the SmackDown, defeating Kenny Dykstra in his debut match.

On May 24, 2010, R-Truth defeated The Miz and won his first singles championship since his return to WWE, it was the United States Championship. Over the next decade, during his long career at the WWE, R-Truth teamed up with Kofi Kingston, Carmella, etc. under various aliases.

The WWE 24/7 Championship was created on May 20, 2019. The event was created as a tertiary championship with an open to anyone nature. It carries the special and somewhat ridiculous rule that it can be defended 24/7, at any moment and at any place, with the presence of a WWE referee, hence the name.

After the announcement of the new championship, later that night, Robert Roode was pinned in the arena’s parking lot by R-Truth to win the title. He then became the first superstar who won both the 24/7 Championship and the Hardcore Championship.

Over the next few weeks, both Truth and Carmella appeared on various WWE events as part of the 24/7 Championship rule where they would run away from other wrestlers who want to grab the title. And this led him to lose the 24/7 title to multiple wrestling superstars. He lost it twice to Jinder Mahal, thrice to Akira Tozawa, Maverick, Elias, etc, and seven times to Mojo Rawley. But he regained the 24/7 titles within hours or even minutes on some occasion.

Eventually R-Truth 24/7 champion went on to become the highest, 42 times 24/7 champion and he is the first among the only twelve people to defend the title for more than 24 hours.

After just a few months of its announcement, the 24/7 championship became the highest viewed of both SmackDown and Raw online. It was also voted as fans’ favorite championship in June 2019. Overtime, Truth lost his title to some interesting persons, they are Rob Stone the sports presenter, NBA star Enes Kanter, and Kyle Busch, a race car drive. He lost the 24/7 title a total of 41 times.

In his massive WWE career, R-Truth 24/7 champion won the United States Championship twice, Tag Team Championship once, Hardcore Championship two times, Bragging Rights Trophy, and the Slammy Award twice. He also has some unconventional trophies in his bag, such as the Best Musical Performance in 2008 and the LOL Moment of the Year in 2005.

Although the 24/7 Championship title is still young, it won’t be far-fetched to say that R-Truth established himself as one of the most endearing and entertaining champions of the title. He can always be counted on to come back and recover his title and the fans are happy seeing him to it.

WWE weapons: The real, the fake, and the techniques used to ensure safety
5 Reasons why WWE should introduce VAR