WWE weapons: The real, the fake, and the techniques used to ensure safety 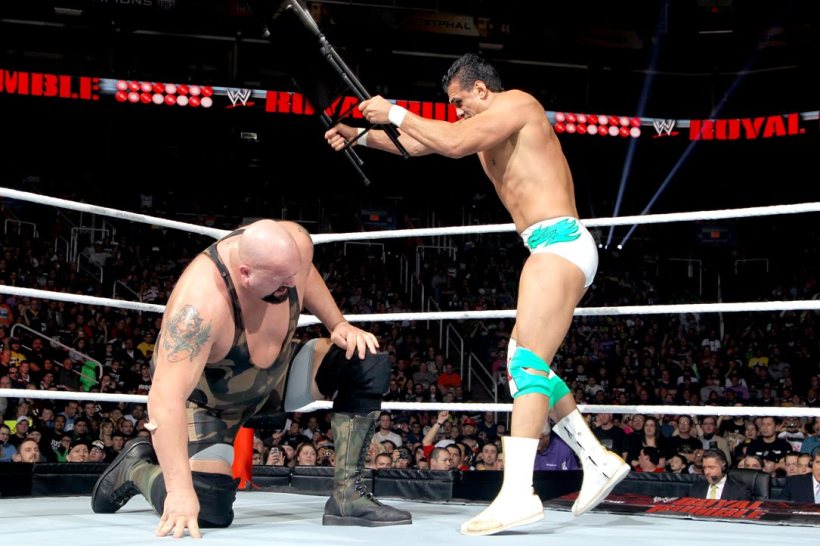 Throughout the history of wrestling, matches involving WWE weapons are among the most anticipated and exciting, with fans keen on Hardcore matches, TLC matches, and no-holds-barred stipulations.

Despite being scripted, the world of wrestling is very much fraught with dangers and real risks, therefore, wrestlers have to perform with optimum emphasis placed on safety to limit career-threatening injuries or fatal accidents.

For all the excitement generated by matches involving weapons, fans have always been plagued by the question of whether the WWE weapons are real or not.

Well, the bottom line is that majority of WWE weapons are very much real but there are some tricks and secrets deployed to their safe usage in the ring.

Here at SportsZion, we shall be having a rundown of 10 WWE weapons and secrets exposed. 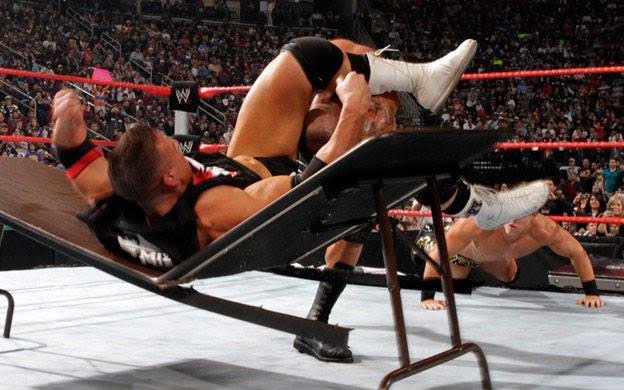 Table matches are very popular in the WWE

Table matches were introduced at the 2000 Royal Rumble in the iconic match involving the Hardy Boys and the Dudley Boyz and since then, it has grown to become one of the staples and most popular matches.

While WWE might suggest otherwise, the tables themselves are made of extremely thin chipboard, which means that they are very fragile and can barely hold the weight of a full-grown man thrown on it.

The tables are extremely safe to use, although the larger than life personas portrayed by the wrestlers makes it look like their superhuman strength made them break regular tables.

Despite this, the metal poles holding up the table can cause some damage and there have been instances when improper technique means that the wrestlers don’t break the table in half.

There is very rarely any real damage done, other than the awkwardness of the wrestler having to be put through the table once again.

The tables used in Japan wrestling promotions are, however, made of real wood and this is why they rarely break on impact. 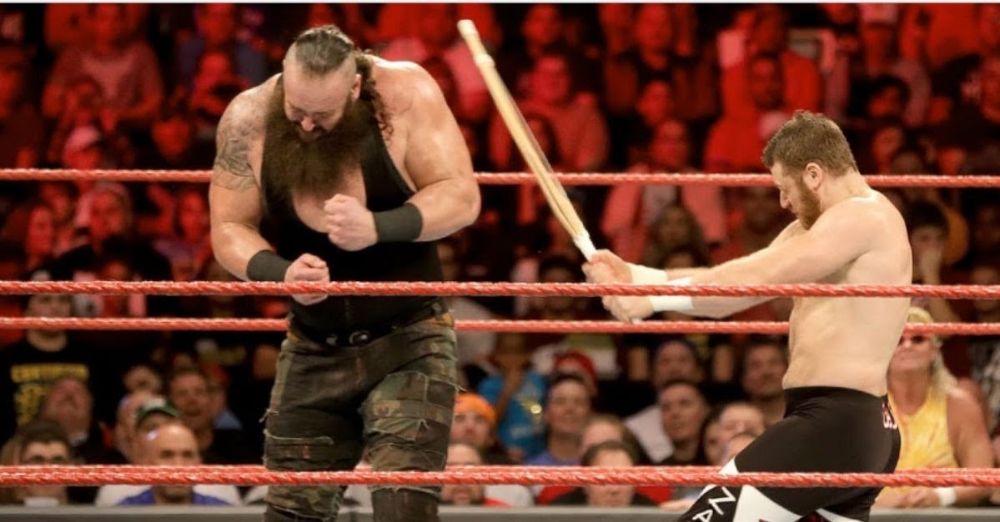 Kendo sticks are also very popular as WWE weapons, in part due to the aesthetics of beating someone up with a stick, but also due to the fact that there is very little possibility of real damage being done.

The sticks are made from very hollow wood and usually break apart after a few hits on the body. The tape on both sides of the stick allows it to stay together for a few moments before coming apart. These extra blows before breaking can cause some damage to the body.

There have also been cases of defective kendo sticks causing damage to wrestlers, most notably Big Show at the WWE Pay-Per-View One Night Stand in 2008. 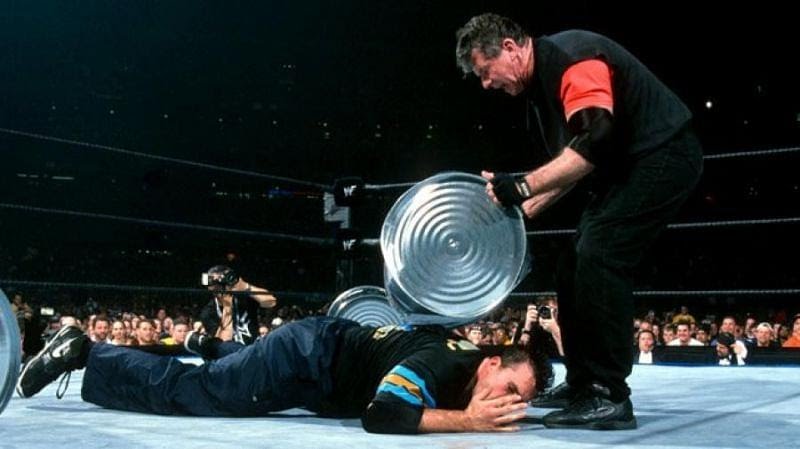 The Garbage Can use as WWE weapons are vastly different from the regular garbage cans that we have used in our everyday household.

They are largely made up of aluminum or tin, making them basically just larger versions of soda or beer cans, which means that they cannot cause any real damage to wrestlers who are hit with them.

In any case, garbage cans are not only used as WWE weapons but can also act as cushions when wrestlers make high-risk maneuvers, or to limit the impact of risky moves.

The Thumbtacks used in wrestling are very much real and the pain felt when wrestlers come in contact with assembled thumbtacks is legitimate.

Thumbtacks were rampant in matches during the Attitude era and ECW but they have slowly been phased into extinction since the WWE reverted to the PG era.

Mick Foley made a name for himself for putting his body on the line for the entertainment of fans and he gave a tip for limiting the pain from the thumbtacks by suggesting that taking the tacks over a larger surface area like the back lessens the pain felt.

He also said that removing the tacks from the body was much worse, while Chris Jericho said that the anticipation of taking the bump was worse than the pain itself. 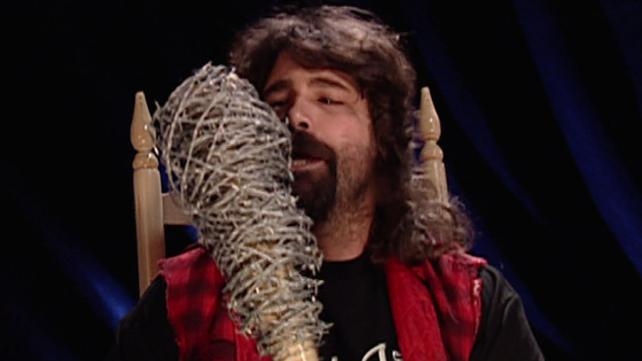 The WWE varies between using real barbed wires and fake wires for the safety of wrestlers in the ring. Mick Foley revealed that two different wires were used during his match with HHH at the 2000 Royal Rumble.

It is suggested that the fake barbed wires have rubber tips to prevent any damage to wrestlers although the more hardcore wrestlers including Batista and Mick Foley opt for the real deal to increase the effect. 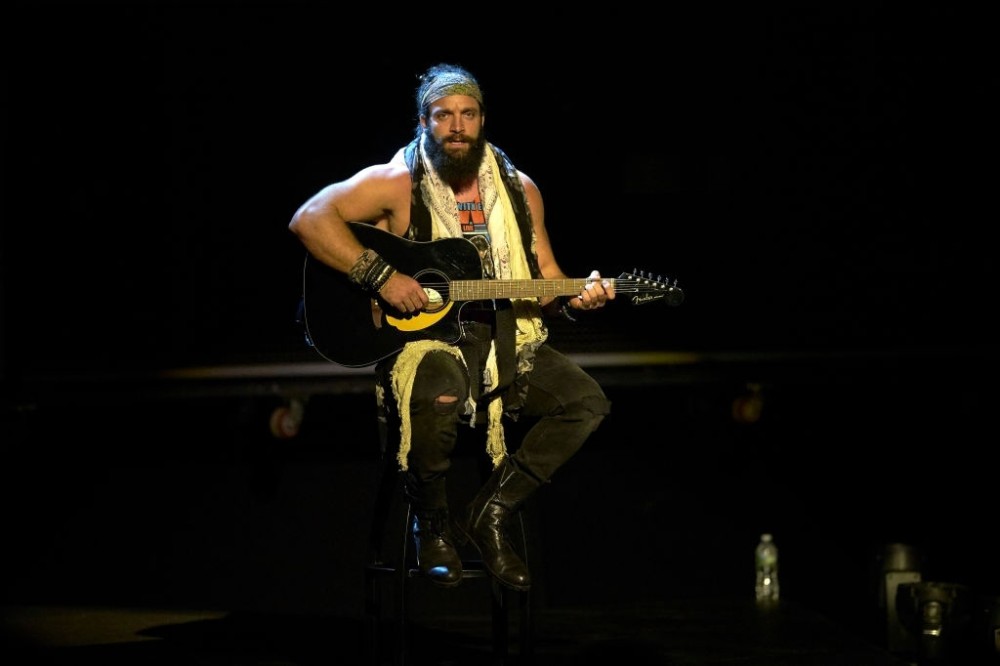 The Guitars used in WWE have been modified to ensure safety

Jeff Jarrett popularized the use of a guitar as a weapon, often smashing it over the heads of opponents during matches.

The guitars are real guitars but they have been disbanded from the inside, making them empty and easy to smash when they come in contact with another wrestler.

The smashing and loud pop when broken make for good aesthetic viewing but there was an instance when Jake ‘The Snake’ Roberts was hit on the head by the Honky Tonk man, however, the stunt was pulled with a solid unshaved guitar, leading to a real head injury for Roberts. 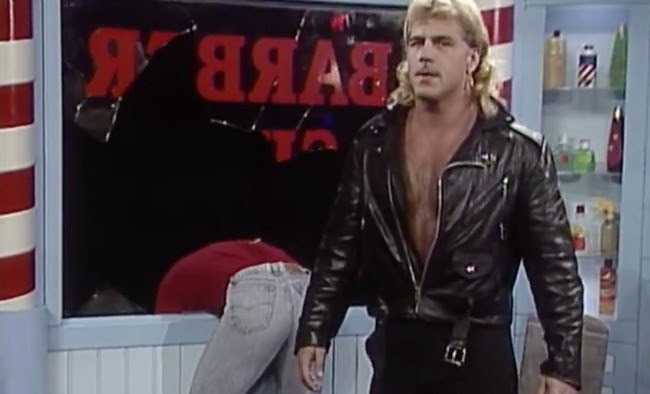 Throwing wrestlers through glass objects have been common throughout history and perhaps the most famous enactment of this scene was when Shawn Michaels gave Marty Jannetty a Sweet Chin Music before throwing him through a window in 1992 In Your House to break up the Rockers and kickstart his solo career.

However, the glasses are not real and are made of ‘sugar glass’ which are completely safe to use, although there have been instances of things going wrong.

During the match between Kurt Angle and Shane McMahon at the 2001 King of the Ring, WWE forgot to use sugar glass and instead used plexiglass, leading to several injuries and over 50 stitches to McMahon. 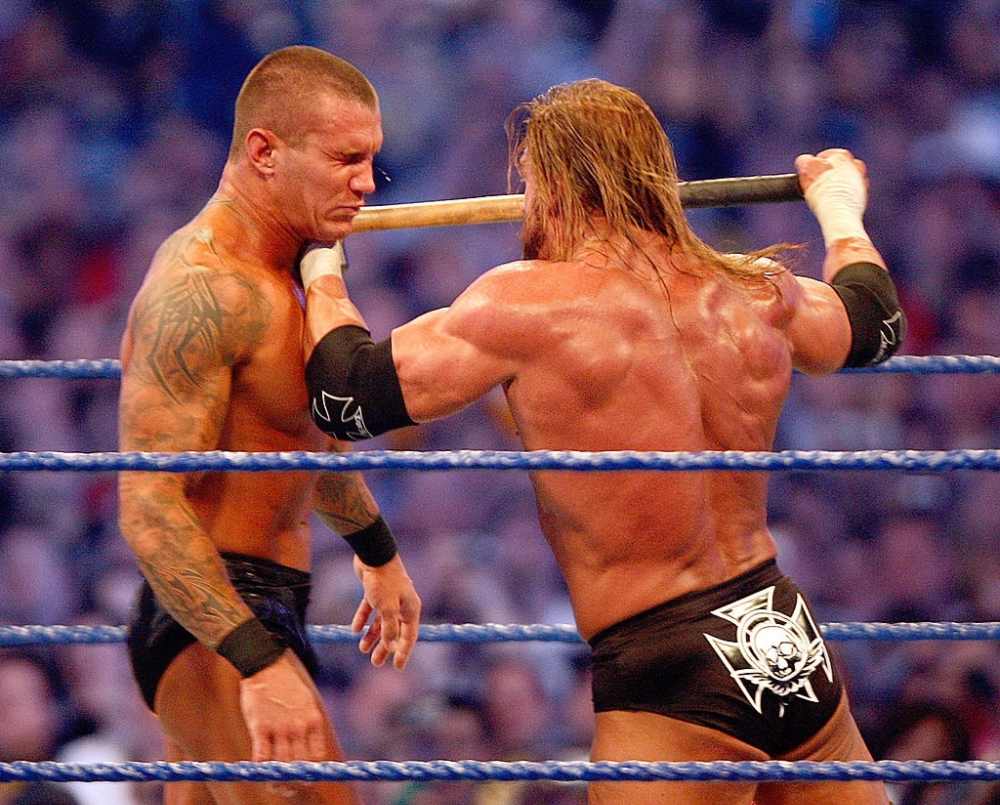 HHH uses his hands to cushion the impact

The Sledgehammer is the trademark of HHH and it was introduced as a WWE weapon by the Cerebral Assassin in 1999.

However, the hammer used by The Game was initially not real. It was made up of a rubber head attached to a wooden base and the only times HHH used a real hammer was when it was to be used on an object and not a human being.

However, a major mishap occurred in the Wrestlemania 17 match between HHH and The Undertaker. The hammer broke after impact on Undertaker’s head, causing an injury to the ‘Dead Man’ and this had a major say on how it was used moving ahead.

From then on, the company elected for HHH to use real hammers but he uses his hand to cover the metal as a cushion to minimize the impact when he hits opposition wrestlers. 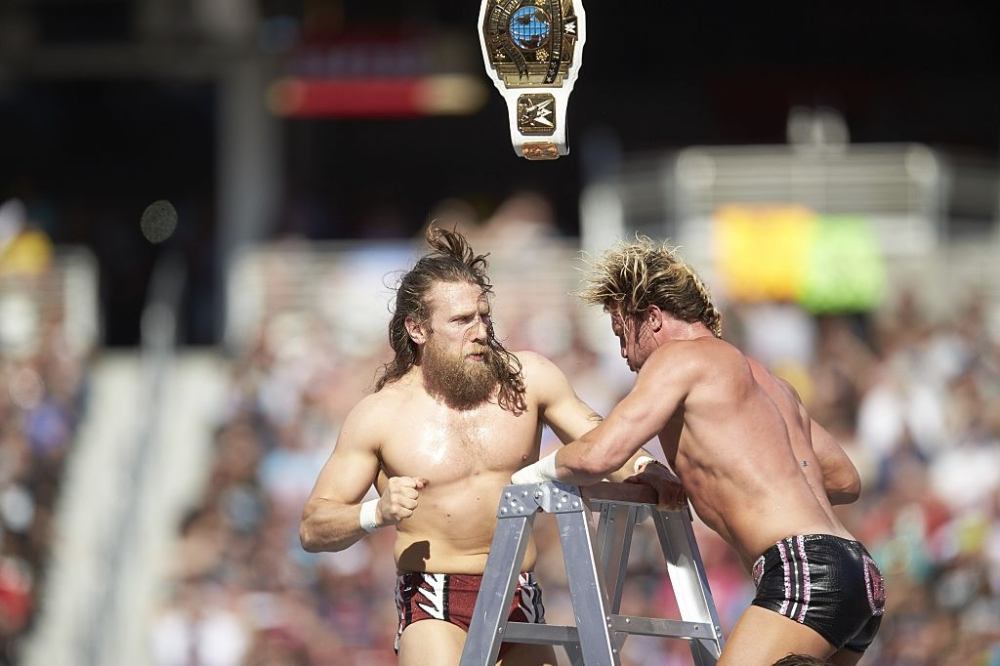 Ladder matches are popular in WWE

Shawn Michaels and Bret ‘The Hitman’ Hart participated in the first iconic Ladder match in 1992 and since then, it has become one of the highlights of the company.

Ladders are either used as instruments for wrestlers to climb and win matches or can be used as weapons. Together, it presents the challenge of being strong enough to bear the weight of wrestlers while climbing, as well as safe enough to be deployed as weapons.

The ladders used as WWE weapons are structurally different from regular ladders. The steel used in making WWE ladders are very hollow, making them lighter to lift and safer to hit other wrestlers with, and the center is weaker, making it easier to break into two for spots where wrestlers have to be put through the ladders.

Despite the safety measures put in place, ladder matches are still highly hazardous and wrestlers including the Hardy Boys still have injuries to this day owing to the numerous ladder matches they have participated in. 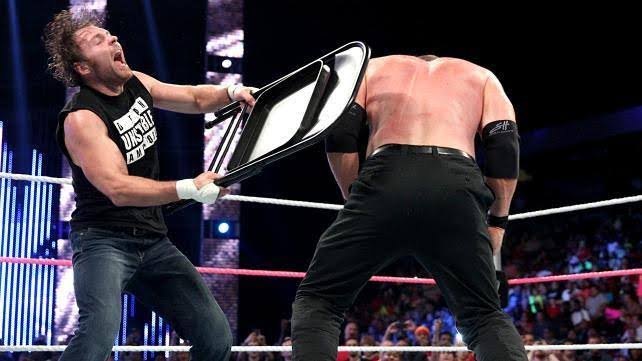 Chairs are the most popular WWE weapons

Steel Chairs are arguably the most popular and iconic weapons in WWE history and they have been included in some of the greatest matches of all-time.

The name steel chairs have had fans wondering whether the chars are really made up of 100% steel and it is pertinent to note that the chairs are entirely legitimate, although unlike the name suggests, they are made up of 92% aluminum.

The only difference between them and regular chairs is that the rivets have been broken, making them easier to fold into two and relatively safer to use.

In the past, wrestlers used to take chair shots to the head regularly but the increasing number of trauma-related incidents and concussions led to shots to the head being expressly prohibited in the WWE and only hits on the back are allowed.

However, certain techniques are needed to ensure safety when delivering chair shots and one of the basics is making sure the chair is entirely flat before delivering the shot, otherwise there would be a real risk of major damage being done.