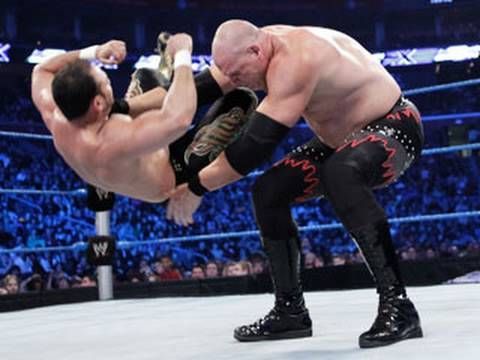 Wrestling isn’t a sprint race, hence, contests are usually long. In fact, most matches in the squared circle last an average of 5-10 minutes. However, there are certain moments when WWE presented us matches that were unbelievably short that they caught our attention.

The wrestling world rose to its feet when legendary superstar, Bill Goldberg returned to WWE after several years and was able to defeat Brock Lesnar in just 90 seconds. In the same vein, everyone would remember the iconic match in which Sheamus dropped a disengaged Daniel Bryan with a brogue kick to claim the World Heavyweight Championship in just 18 seconds.

There are many records of such matches in the memories of the spectators. From the late 90s to the early 2000s and down to the current decade, the company hasn’t stopped witnessing ridiculously short contests. Below, we present to you, the top 10 shortest matches in WWE history:

There aren’t much shorter title matches than this one

Kofi Kingston finally got what he dreamed of when he became the WWE Champion recently before losing the prestigious title to Brock Lesnar. The New Day member shook the WWE universe with his ‘Kofimania’ breakout and he’s been one of the top guys in the company of late.

Back in 2009, the superstar was the United States champion and he was pitted against Brian Kendrick in the squared circle. While the two men stepped into the ring and started signaling the fans who were cheering them up, Kendric started an argument with Jerry Lawler and didn’t pay attention.

He didn’t hear when the bell rang. Kofi Kingston took advantage of the moment and hit him with Trouble in Paradise. He quickly pinned him to get the victory after just 11 seconds. It became a record as it entered into the list of the shortest matches in WWE history.

Kane, also known as the Big Red Machine, is one of the few wrestlers in WWE that you wouldn’t want to joke with. The monster has been a nightmare to rival superstars in the squared circle. Those who tried to mess up with him ended up on the regretting end. One of such superstars is Chavo Guerrero.

The two men faced each other in the squared circle at Wrestlemania XXIV. In the build-up to the match, Chavo had been provoking Kane and he had gathered some momentum, with the fans expecting an upset in the outcome. Anyway, that never came; rather, what happened was the direct opposite of it.

With the two superstars in the ring, the bell rang to the delight of the expectant spectators. Kane grabbed Chavo and hit him with a thunderous chokeslam to end the match just after 10 seconds.

A brogue kick was all Sheamus needed to settle this one.

This is another of those very short matches WWE gave us in the past few years. In this one, Sheamus and Zack Ryder stepped into the squared circle to settle their business but they couldn’t keep it for long as the duel ended even before the audience could realize it.

No one actually understood the reason behind the feud but we saw that Zack Ryder was given a title shot against Sheamus, who was the then WWE champion and the doubts were justified almost immediately the two men kicked-off their contest in the ring.

Zack Ryder didn’t even get a chance. On hearing the bell, Sheamus approached him instantly and hit him with a brogue kick before pinning him and ending the match within just 10 seconds. Lying on the ground, Ryder couldn’t believe what just happened to him.

Big Daddy Cool Diesel was a monster figure in the WWE during the 90s. Moving his career at an incredible pace and setting the standards for his rivals in the squared circle, the superstar made history by claiming the WWE Championship in 1994.

While the coveted belt is a prestige on its own, what brought the attention to Diesel mostly was the way he captured it. He did it in just 8 seconds, battering Bob Backlund in the ring before anyone could realize what was happening and entering the history books as one of the shortest WWE matches of all time.

The match was held at the WWE Live event at Madison Square Garden and it gave Diesel a monstrous push that helped him climb up to the top of the business. That match will be remembered for long as it is also one of the fastest accounts the WWE title changed hands.

An open challenge for the Intercontinental Championship

There’ve been many poor decisions from WWE superstars in recent years but this is perceived to be one of the worst by the spectators. Curt Hawkins made a big mistake when he returned to WWE in 2016 and believed it would be different from his first stint in the company.

He re-debuted officially back in November 2016 when he accepted Dolph Ziggler’s open challenge for the Intercontinental Championship. Following an impressive promo, the fans were hoping to see a great turnout. Unfortunately, they didn’t get anything close.

The match ended up becoming one of the shortest contests ever recorded in WWE history as Dolph Zigler stepped up immediately the bell rang and hit a superkick on Hawkins to pick up the victory and retain his championship. It took him just 7 seconds to get the job done.

This didn’t come as a surprise

The Great Khali is one of those wrestlers you don’t want to mess with. Owing to his tremendous height and incredible physique, the Indian superstar remains a nightmare to even elite superstars in the squared circle. No one dares try him.

Well, Damien Sandow did when he provoked Stephanie McMahon by dressing like her father, Vince McMahon on an edition of Raw in June 2014. An angry Stephanie called on The Great Khali to fix the mess as Sandow waited for The Great Giant in the squared circle.

Khali hit a massive chop to Sandow’s head and went ahead to claim a victory over the impersonator after just 6 seconds. No one saw that coming but it didn’t come as a surprise either. It is one of the shortest matches WWE has witnessed in its long and illustrious history.

Rowan took a humbling from The People’s Champion

Erick Rowan is seen by the WWE universe as one of the most gutted superstars in the company at the moment but his gut couldn’t save him after he landed in trouble for angering The Rock in the build-up to Wrestlemania 32.

Even though the Wyatt Family was still going strong at the moment, there was nothing they could do to save Erick Rowan from the wrath of The People’s champion as he made his return into the squared circle with a lot of excitement from the fans.

The Rock was very quick in disciplining Rowan, hitting him with a Rock Bottom and ending the affair in just 6 seconds. It is one of the shortest matches the company has put up and it also helped to mark a great return into the ring for The Rock.

It took The Rock just 4 seconds to settle the business.

For the second time, the Rock makes it into the list of the shortest matches in WWE history. Once again, he isn’t at the suffering end. Rather, he is the one who inflicted another short loss on his opponent and this tops the one we recorded earlier in terms of time length.

It appeared WWE was having a nice time with The Brahma Bull at Survivor Series in 1998 when it came to him to run the gauntlet. Big Boss Man was chosen to replace Tripple H for the tournament but he would rather have wished he didn’t get the chance that day.

Immediately after the bell rang, The Rock opted for a quick roll-up against his counterpart and he was able to get the better of him, recording one of the shortest WWE matches of all-time when he got the job done in just 4 seconds in the squared circle.

Dudley picked up the victory with the help of brass knuckles

This happened in 2002 when William Regal was the then WWE’s European Champion. Still enjoying his reign with the title in his hands, he was made to defend it against Spike Dudley, a member of the Dudley Boys that performed in the ring during those days.

Considering that Dudley appeared small, many expected the match to an easy ride for William Regal. However, reverse ended up being the case as fans got stunned with what they saw on that night as The Bully of Dudleyville upset the odds to deliver to us an unbelievable victory that made its way into the record books.

Spike ran into the ring with brass knuckles instantly and knocked Regal out without the referee taking note. He won the title on the night and the match remains one of the shortest the WWE universe has witnessed as it lasted for just 3 seconds.

This is a match that sent the WWE universe wild. Despite having departed the company, Tazz will definitely keep remembering it for a very long time. In fact, it is a record he won’t be proud of, especially owing to how things panned out that day.

The Human Suplex Machine wasn’t meant to partner with Naked Mideon on that night. But Hulk Hogan, who was supposed to join hands with him didn’t appear and Mideon was asked to fill his void. That didn’t appeal to Tazz, who became upset at seeing him make his way to the ring.

A carried away Tazz didn’t know when the bell rang and Jerry took advantage of the situation as Mideon ran away to deliver the shortest match in WWE history. It was a humiliating defeat but on the bright side, The Human Suplex Machine was able to enjoy some success years later in the company.