WWE Draft 2020: A sneak peek into all major picks for both RAW And Smack down 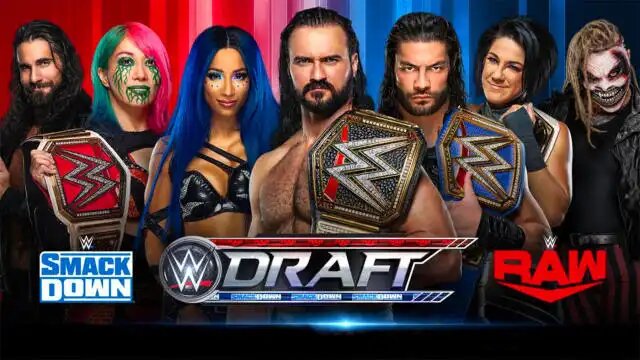 The much anticipated WWE draft 2020 is finally on the records, and the recent shuffle in WWE roster has witnessed some of the most iconic superstars switching between two of the main shows.

The WWE draft 2020 process kickstarted on the Smackdown episode and continued until the end of the following week’s Monday Night Raw. 84 superstars were picked across the 12 round process, with some of the superstars finding their spot in supplementary draft picks.

While few of the superstars still went undrafted, the most iconic ones either found a new home or got retained by their respective brands. Few new tag teams were also formed after splitting the old ones, and this is where fans can expect some new angles and storylines to come their way in the following weeks.

The previous year’s edition of the WWE draft didn’t receive the desired reviews, and this is where the WWE management made some major changes in the latest edition. Each of the WWE draft picks was announced in a commissioner typed role by Stephanie Mcmahon, the existing WWE chief brand officer.

However, the format still stayed the same and the only big change that caught everyone’s attention was the elimination of face painted executives and cartoon robots indulging in war room celebrations.

The drafted superstars have been put on focus for all such celebrations, and this is where fans can expect some real fun and entertainment coming their way.

That said, let’s take a look at the detailed list of major picks and misses of both the shows in the WWE draft pool.

How are the dynamics going to change in both the RAW and Smackdown post-WWE draft?

As the WWE draft process is done and dusted, we can hope to witness some new rivalries and feuds in both RAW and Smackdown in the coming weeks. As Seth Rollins makes his way to the blue brand, his old rivalry with a former teammate at Shield – Roman reigns, is all set to fire up.

Likewise, we can expect to see a new rivalry between the WWE champion Drew McIntyre and the ‘Monster’ Brian strowman on Monday night Raw. Speaking of the women’s section, women’s champion Asuka will see through a fresh threat to his title from Charlotte flair on Monday night raw.

Similarly, a new angle and storyline can be expected with women’s champion Bayley taking on the challenge from Sasha banks and Bianca Blair.

All these rivalries seem obvious after taking the past accounts of the mentioned WWE superstars into consideration. Still, we got to wait and watch as the mystery unfolds in the coming weeks of Raw and Smackdown.

Roman Reigns vs The Rock on the cards? Here’s what Reigns has to say after getting a challenge from his cousin
10 WWE superstars who pose a big threat to John Cena’s future chances of securing a WWE title