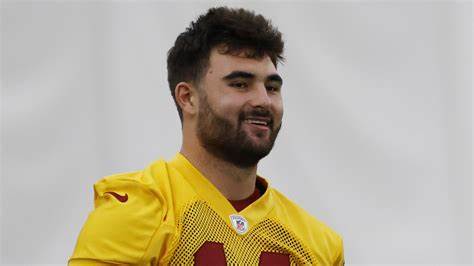 Sam Howell of the Washington Commanders has revealed an interesting fact about his diet. The only type of meat that the quarterback likes is chicken. This revelation has gotten quite the response from social media.

Eating idiosyncrasies are very common. Different people have different types of combination, or food choices that might seem odd to others. One such eating habit that cause quite the sensation on social media is that of Sam Howell.

The Commanders quarterback had revealed back in 2020 that since childhood, he’s only ever had chicken, primarily nuggets or tenders. He never ventured into the world of seafood either.

“People give me a hard time, but the only meat I eat is chicken,” Howell revealed, ” “It’s been like that my whole life. I really don’t know why. I started that when I was younger, but it’s something I’ve kind of just kept up through my whole life.”

“Chicken is the only meat I eat, so I only go to restaurants that serve something with chicken on the menu.”

Although this was revealed back in 2020, the topic has resurfaced again after he revealed in a recent Commanders video that his fun fact is never having steak before. Howell has been a late pick for the Commanders.

"Hi, I'm a rookie Commander, and a fun fact about me is…" pic.twitter.com/nWBdALRWRm

Chicken wing shortage must've had bro in a tizzy https://t.co/xO0THyyZe6

No steak? No pork? Give him rookie of the year right now https://t.co/FnzrDDJoAk

Keeping chicken tenders in the inside pocket of a blazer and occasionally pulling one out in the middle of a conversation? Extremely cool.

Doing that because chicken is the only meat you consume? Deeply weird.

We have to draw the line somewhere. https://t.co/C29o2VToPS

The people can say what they want, but this diet has been integral behind his on-field success. North Carolina has gone 5–18 in the 2017 and 2018 seasons prior to his arrival. During his first two seasons with the Tar Heels, Howell threw for 7,227 yards, 68 touchdowns, and 14 interceptions, leading UNC to consecutive winning seasons.

Mike Davis Home Robbed, $100,000 Worth of Jewelry Stolen by Burglars
Broncos’ Jerry Jeudy Released on Bond after Mother of His Child Drops Charges