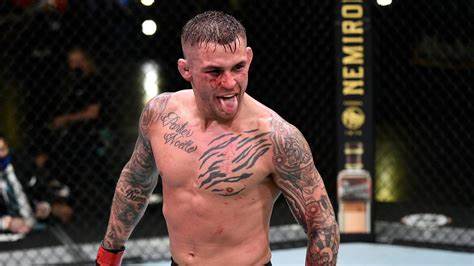 One of the key talking points of UFC 274 was Michael Chandler’s spectacular knockout of Tony Ferguson. The high kick to the jaw, which are many considering as the greatest knockout in the UFC, has been a topic of conversation worldwide. It was not just the knockout that stood out, it was also Chandler’s post-fight interview.

Chandler called out a host of different lightweight contenders. He first called out Charles Oliveira, and Justin Gaethje, who fought the title on the same night. A few moments later, he also called out UFC poster boy “The Notorious” Connor McGregor.

While all of the names are amongst the top fighters in the division, one fighter missing from the list was Dustin Poirier. The Louisiana native, who goes by the moniker “The Diamond”, did not take the omission lightly. He seemed to stick this to Chandler by calling him “Iron Michelangelo”, and saying a lot of big names were mentioned, except his.

A lot of names being said by Iron Michelangelo but I'm not hearing mine. Respectfully

Poirier, who is currently ranked number 2 in the division, is yet to fight since his loss to Charles Oliveira. It was the former interim champion’s second failed shot at the title. Chandler’s last fight was his out-of-the-world knockout of Tony Ferguson. The path of these two fighters is destined to cross at some point. It remains to be seen how soon that fight happens.

In the meantime, Poirier is rumored to be favoring a fight against UFC cult hero Nate Diaz. Although he would have to go up a weight class to Welterweight, it should be an interesting fight should it happen. It would be Diaz’s last fight in the UFC, so the hype will be immense.