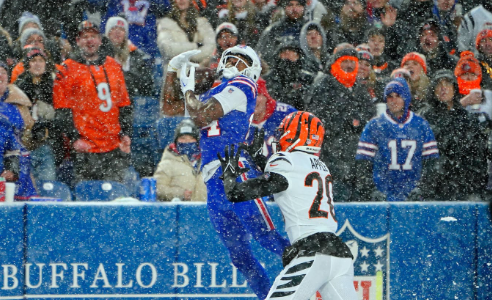 Player clashes are pretty common in sports. Now and then, players get involved in fights with each other on and off the field. Disagreement among players has the power to grab the attention of fans for an extended period. So, fans can be noticed on many platforms getting divided into two groups and fighting for their favorite athletes.

That being said, it has been a wild 24 hours, to say the least. The beef between Stefon Diggs and Eli Apple has undoubtedly created some unwanted hype among fans.

It all started when Diggs, the Bills’ WR, left the Divisional match early. Many NFL followers went on to criticize the athlete for doing so. After getting heavily criticized, Stefon came out on Twitter to respond to his haters. In his tweet, Diggs wrote, “It’s easy to criticize my reaction more than the result.”

It’s easy to criticize my reaction more than the result.

Stefon’s’ tweet became viral within hours and reached many individuals, including the Bengals’ CB Eli Apple. The Bengals CB did not take Diggs’s tweet the right way and insulted the Bills’ WR, replying to his tweet. Eli replied to the tweet calling Stefon “Cancun on 3 🫶🏿.”

After Apple’s response, things took a left turn, and there was visible beef between him and Stefon Diggs with another tweet from the Bills’ WR.

Diggs felt offended by Eli’s tweet and did not think twice to state that Apple was “clout chasing,” and rightfully so, as it was unnecessary from Apple’s end to make such a comment.

Consequently, most fans stood with Stefon and joined the bashing with their comments.

How did fans react?

A lot of Bengals fans showed their support towards Eli, while most other fans saw no reason for Apple to comment on Diggs’s tweet and reacted with logical comments of their own.

Another fan added, “Ignore him, Diggs. He’s the Kanye West of the NFL. And he’s likely proud of it.”

A fan reacted with a meme and shared-

Was it necessary for Apple to step in? You can express your thoughts in the comments.