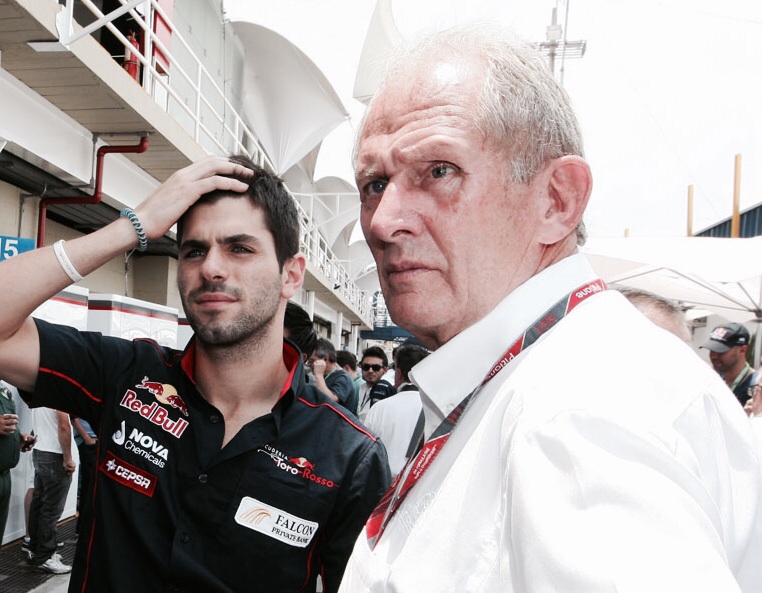 Since the very beginning of their F1 journey, Red Bull Racing team’s world-class consultant, Helmut Marko, 79, successfully established a trend of nurturing young and talented race car drivers in different circuits across the globe, which handed the beverage giant some superb individuals like Daniel Ricciardo, Sebastian Vettel, and most recently, Max Verstappen.

Yet, a few jinxed drivers like Jaime Alguersuari failed to make any charismatic impact under Mr. Marko and thus exited the track with the hope of searching for a different path in his career.

Why did Jamie Alguersuari open up against Helmut Marko?

Former Formula One driver Jaime Alguersuari has spoken up about his retirement from competitive racing and the repercussions of his friendship with Helmut Marko and Red Bull as the 32-year-old competed in Formula 1 for 2.5 seasons, driving for Toro Rosso (which subsequently changed its name to AlphaTauri) from 2009 to 2011.

He and his former colleague Sebastien Buemi were both expelled from Red Bull’s “junior” squad for 2012 as a result of the notorious young driver program but prior to joining Virgin Racing for Formula E’s first season in 2014, Jaime’s only previous F1-related position was as Pirelli’s test driver, which he held in 2012 and 2013.

Jaime Alguersuari, a veteran Toro Rosso driver, has revealed some disturbing details regarding his time racing in Formula One. He added that his time with the squad still haunts him and made some serious accusations against Helmut Marko. He said that Marko’s treatment of him had severely damaged his mental health.

In 2009, Jaime Alguersuari replaced Sebastien Bourdais in the middle of the season and when he arrived, he was the Formula One driver who was the youngest at that time. He recalled his experience as unpleasant, nevertheless, because of how the Austrian supposedly handled him and he has since changed his mind in a subsequent tweet.

I want to clarify something reg. HELMUT MARKO. I am deeply thankful to have met him when I was 15, Helmut was my teacher and someone who always asked me to deliver to push and boost myself forward and beyond. This is the Junior team system and it works 1/1

The former driver-turned-DJ has reversed course following some stinging comments about how Marko’s conduct caused him “trauma” through a recent tweet, “I want to clarify something reg. HELMUT MARKO. I am deeply thankful to have met him when I was 15, Helmut was my teacher and someone who always asked me to deliver to push and boost myself forward and beyond. This is the Junior team system and it works 1/1”

Jaime clarified that he is really grateful to have encountered Marko when he was 15 years old. He said that Marko was his instructor and that he had pushed him to go “ahead and beyond” by asking him to “deliver to push and boost” himself.

Unfortunately, the Spanish racing driver decided to abandon his professional racing career and focus on the music industry after collapsing at the conclusion of the 2015 Moscow Grand Prix in Sochi, and since then, his racing career became a part of Formula One’s history.

‘Mercedes did not build the perfect chassis this year’ Ex-F1 driver boldly predicts Silver Arrows to ‘do a Red Bull copy next year’ to resurrect their fate
Lewis Hamilton addresses NBA legend Michael Jordan, in the same cohort as his father