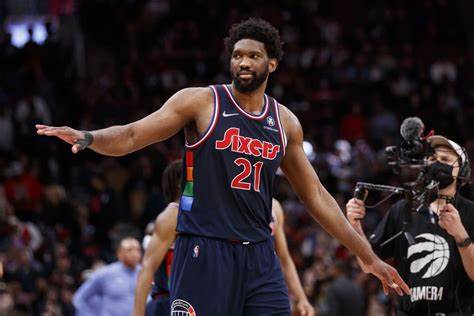 Philadelphia 76ers Power Forward Joel Embiid has hit out at Toronto Raptors’ fans for their heavy jeering of opposition players to motivate their own players.

The playoff series between the 76ers and the Raptors was one of the most interesting ties this season. The 76ers and Embiid raced to a 3-0 lead in the series, only for the Raptors to claw their way back to 3-2. But they were swept aside in the fourth game, and the 76ers eventually went on to take the series 4-2.

Even though it was exciting series, one of the main talking points was Pascal Siakam’s elbow on Joel Embiid, which led to the 76ers talisman missing out on the first two games against the Miami heat. Embiid, though, returned for game three and inspired his team to victory. Speaking after the game, Embiid spoke about the elbow, as well as the Toronto fanbase.

“I don’t know. I don’t think it was intentional, that’s my guys obviously. Embiid said about Siama. “I don’t think he meant to do it.”

“But I was more irritated by the perception of when that happened, really their fans,” Embiid continued. “I’ve always thought they’ve had great fans, but it kind of changed my mind about their fans up there. Whether it was throughout the series, the F chants, and all that stuff, that’s cool. It never gets to me anyway, but I think they got mad because I did the airplane celebration.”

The moment that Ebiid was referring to occurred in the latter stages of the fourth quarter in game 6. Embiid broke out a football-style celebration after throwing down a dunk. That dunk put the final nail in the coffin of Toronto’s post-season. even though many fans enjoyed Embiid’s celebration, the Raptors fans certainly did not.