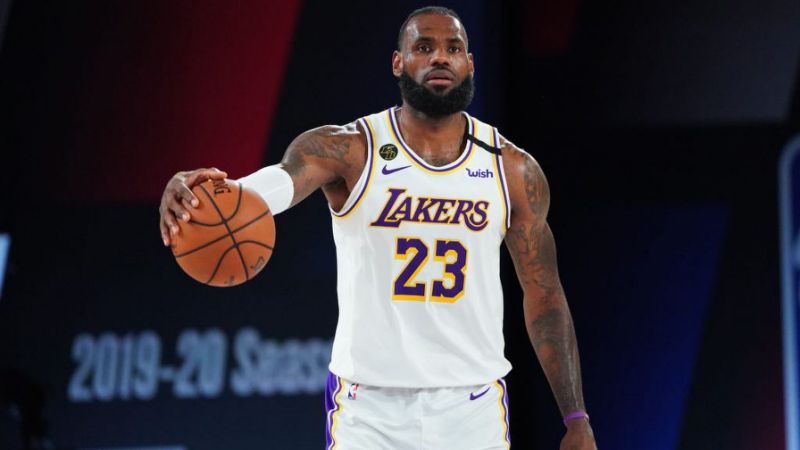 James ruled over the Eastern Conference during the 2010s with an iron fist. Since signing with the Miami Heat as a free agent and forming a Big Three with Chris Bosh and Dwyane Wade, James made 8 straight NBA Finals appearances.

James making an NBA Finals appearance is, by now, such a ritualistic phenomenon that any time that he doesn’t do so in the near future at full fitness, he will be criticized for having regressed as a player.

Despite playing in the 17th season of his NBA career, James has shown few signs, if any, of slowing down. The 5 month break that the league got due to the coronavirus shutdown seems to have done him a world of good.

Let’s take a look at each of his previous 9 Finals runs in his career:

James’ first really deep playoff run began with a series sweep over the Washington Wizards, who’d finished 7th in the Conference in the season gone by. LeBron’s Cavs then made light work of Vince Carter and Jason Kidd’s New Jersey Nets.

They met the Detroit Pistons in the Conference Finals. After conceding the first 2 games of the series to the top-ranked team in the East, the Cavs rebounded with 4 straight wins. James scored 24 straight points on his own in Game 6 to make his first NBA Finals appearance.

Although Greg Popovich’s Spurs swept the Cavs in the Finals, James’s trajectory as a Mount Rushmore player had already begun. James averaged 25.1 points, 8.1 rebounds and 8.0 assists through 20 games

After taking his talents to South Beach following 3 straight seasons with no NBA Finals appearances, LeBron James and Miami’s Big Three became prohibitive favorites for the NBA championship. The Heat finished as the 3rd best team in the league and 2nd in the Eastern Conference behind the Chicago Bulls with a 58-24 record.

James brought his A game to the Eastern Conference playoffs as the Heat lost just 3 games en route to an NBA Finals appearance against the Dallas Mavericks.

But the 2011 NBA Finals will rank as among the worst meltdowns by a superstar in sports history, as James struggled to score on Jason Terry and JJ Barea in the post. The Heat, despite being 74% favorites, lost the Finals 4-2 to the Mavericks led by Dirk Nowitzki. James was not even the third best player on his team in the series.

James returned next season with a vengeance, as the Heat finished with a 46-20 record in the lockout-shortened season. After despatching Carmelo Anthony’s Knicks 4-1 in the first round, they took 6 games to see off the Indiana Pacers in the Conference semis.

They were stretched to the limit by the aging Big 3 Celtics, who held a 3-2 series lead at one point. James had a stupendous Game 6 performance with 45 points, 15 rebounds and 5 assists. This game is commonly regarded as his best playoff outing.

After dropping Game 1 of the Finals on the road to the Thunder, the Heat won 4 straight games for LeBron James to seal his first championship in his 3rd NBA Finals appearance. He won his first Finals MVP as well, with averages of 28.6 points, 10.2 rebounds and 7.4 assists per game.

In what was probably his best overall basketball season, James led the Heat to a 66-16 record in the regular season. They went on a 27-game winning streak during this season and established a spectacular new brand of small ball basketball.

After sweeping the Bucks in round one of the playoffs and despatching the Bulls off in 5 games in the Conference semis, James had the toughest Eastern Conference series of the previous decade against the Indiana Pacers.

The defensive-minded Pacers took them all the way to Game 7, but another signature LeBron James performance took him to his 3rd straight NBA Finals appearance. Despite Danny Green’s great shooting, the Spurs lost the Finals in 7 games and James took home his second straight NBA title and Finals MVP trophies.

With Dwyane Wade and Chris Bosh dealing with injuries all season long, LeBron James’s monster season was not enough for them to take the #1 seed in the East.

James put the Heat on his back never before in these playoffs. He averaged 27.4 points on 56.5% shooting from the field and over 40% from 3-point range to lead them to series wins over the Hornet, Nets and Pacers in the Eastern Conference in 4,5 and 6 games respectively.

But the Heat were run off the floor by the San Antonio Spurs in their 4th straight NBA Finals appearance. They won the series in 5 games with what was at the time the largest points differential in a Finals series. LeBron’s time at South Beach drew to a close.

James’ decision to return to home state Ohio and his Cleveland Cavaliers shifted the balance of the Eastern Conference back to the Central division. Despite the Cavs finishing only second in the Conference, they embarked on their first NBA Finals appearance since 2007.

LeBron’s stupendous play allowed the Cavs to see off the Celtics in a sweep, then the Bulls in 6 and finally sweeping the 60-win Atlanta Hawks in the Conference Finals.

James carried an all-time great burden in the Finals as both Kevin Love and Kyrie Irving went down with injury. Despite shooting less than 40% from the field, James still averaged a mind-boggling 35.8 points, 13.8 rebounds and 8.8 assists per game in their 4-2 series loss.

The Cavaliers wrapped up their first #1 seed since 2010 and embarked on a wrecking ball run through the Eastern Conference playoffs. With Irving at full health, the Cavs swept the Pistons and the Cavs before taking the Raptors down in 6 games en route their second straight NBA Finals appearance.

In the greatest NBA Finals comeback of all time, the Cleveland Cavaliers exploited the absences of Draymond Green and Andrew Bogut at varying stages of the series to beat the 73-9 Golden State Warriors 4-3 after being down 3-1 in the series.

James led both teams in all 5 major statistical categories and won the 3rd Finals MVP trophy of his career. He had back to back 41 point games in the Finals.

Despite taking it slow in the regular season, the Cavaliers exploded into life in the playoffs with one of the most dominant Conference playoff runs of all time. They swept the Pacers and the Raptors before making light work of the top-seeded Boston Celtics in 5 games in the Conference Finals.

But they came up against the all-time great Warriors juggernaut of Steph Curry and Kevin Durant, complemented by All Stars Klay Thompson and Draymond Green. The Warriors reclaimed their NBA championship in style through 5 games, despite LeBron James becoming the first and only player to average a triple-double in a Finals series.

Losing Kyrie Irving and acquiring only the corpse of Isaiah Thomas in exchange meant that there again was a certain amount of weight on LeBron James’s shoulders.

In his toughest Finals run ever, the King averaged 34 poins, 9 rebounds and 9 assists as he battled through 7-game series in the first round against the Indiana Pacers and the Conference Finals against the Boston Celtics. He knocked the Raptors out in the Conference semifinals for a 3rd straight time in a series sweep.

But the weight of the juggernaut Warriors again proved too much for James, as the Cavs lost the Finals by the largest points differential of all time.

With his 10th NBA Finals appearance, James joins Kareem Abdul-Jabbar as the player with the third most Finals appearances. He’s now got Finals appearances in 3 different decades – the last player to do so was Tim Duncan. No matter how he fares in this series, although he’s expected to win, James’ legacy as a Mount Rushmore player is firmly set in stone.