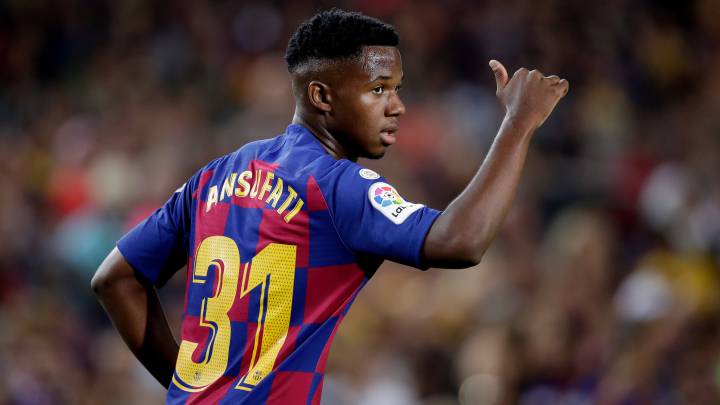 Manchester United are willing to trigger the massive £153m release clause for Ansu Fati. The player had been previously linked with the English club as his breakthrough performance caught their attention.

The former Premier League winner have been trying to land Jaden Sancho from Borussia Dortmund for a long time. But the deal came to a standstill as Dortmund asked £108m for the youngster that is above Man Utd’s agreed price.

Also, the player said a few days ago he wants to stay at the German club during their pre-season campaign in Switzerland.

On the other hand, Sancho’s weekly wage was almost £300,000 that the Red Devils were unlikely to accept. Instead, they are moving their focus on Ansu Fati who has impressed the Manchester club recently.

The winger made 33 appearances for the senior team in the 2019-20 season where he scored 8 goals and made one assist. His decision making as well as shooting ability at such a tender age indicates that a bright future is waiting for him.

The 17-year-old’s current contract with FC Barcelona will expire in 2022. Last year, they improved Fati’s contract by extending it up to 2022. Also, the release clause of the player increased from €100m to €170M. However, the clause amount will elevate up to €400m if the youngster agrees to sign a professional contract.

The Catalans are optimistic they will tie him with a new contract with an increased £360m release clause. Barcelona president Josep Maria Bartomeu already said he wants to keep Fati at Nou Camp for the future.

“There have been no formal offers but there has been interest from some clubs,” Bartomeu told earlier. Sport. He’s essential for the future of the club. Ansu is not for sale.”

“He represents the academy the players come out of, learn from and consolidate themselves in the first team. He’s unique because he jumped from the youth team to the first team.

“There are not many players like him and Barcelona cannot sell him, even if it would be an economic solution for the club in the times of this pandemic.

“At no time have we considered selling him. On the contrary: what we have to do is help him in his growth and get him to sign a new contract in the future so that he plays here for life.”

But on the other side of the coin, Fati has changed his agent recently. Previously, Leo Messi’s father Rodrygo Messi was his agent. Now reputed football agent Jeorge Mendes is taking care of Fati’s off-field activities.

In these circumstances, Man Utd would like to find a way to allure the Spaniard in the Old Trafford before he signs the professional contract in FC Barcelona.