Top 5 Most Valuable NFL Rookie Cards of All Time 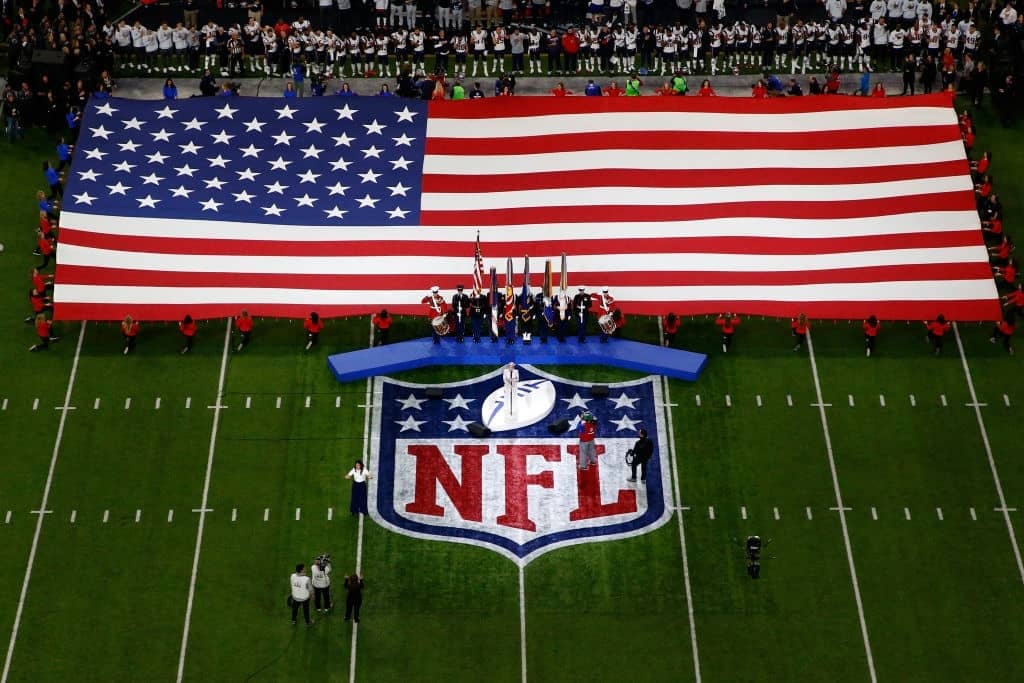 Sports fans and rich collectors alike, spend millions of dollars on rare and mint condition rookie cards for they are worth a massive fortune, and their worth keep on rising, earning them a massive profit in the years to come. Since an autographed rookie card is so rare, collectors fight a fierce battle to own these gems.

In the history of the sport, millions of dollars have been spent on these rookie cards. Our team here at Sportszion has conducted extensive research and presented this list of the top five most valuable NFL rookie Cards of all time. 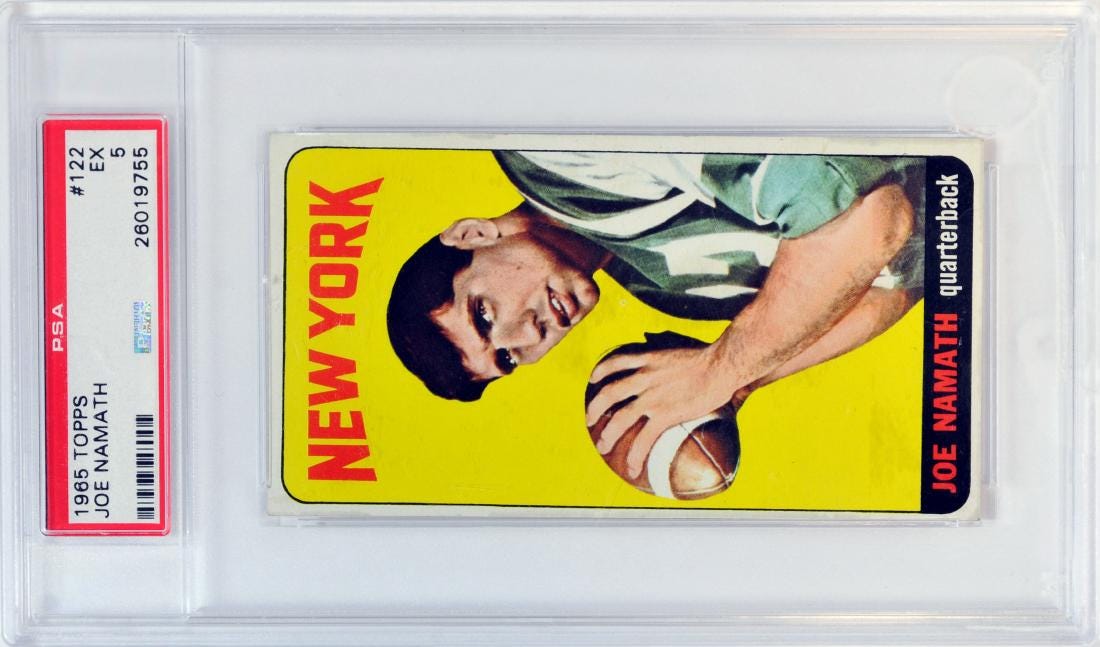 Every single football fan around the world has heard the name of the legendary Joe Namath, who helped his underdog team, the New York Jets to win the Super Bowl III. The NFL Hall of Famer’s only recognized rookie card by the professional Sports Authenticator (PSA) is also the most recognized rookie card in the entire hobby.

The 1965 rookie card is one of the most sought after for its slightly bigger dimensions and its rarity. The former Jet’s star player’s rookie card sold for a massive sum of $265,000 in February of 2018. The official PSA website assigns a worth of $275,000 to a MINT 9-grade version of this card. 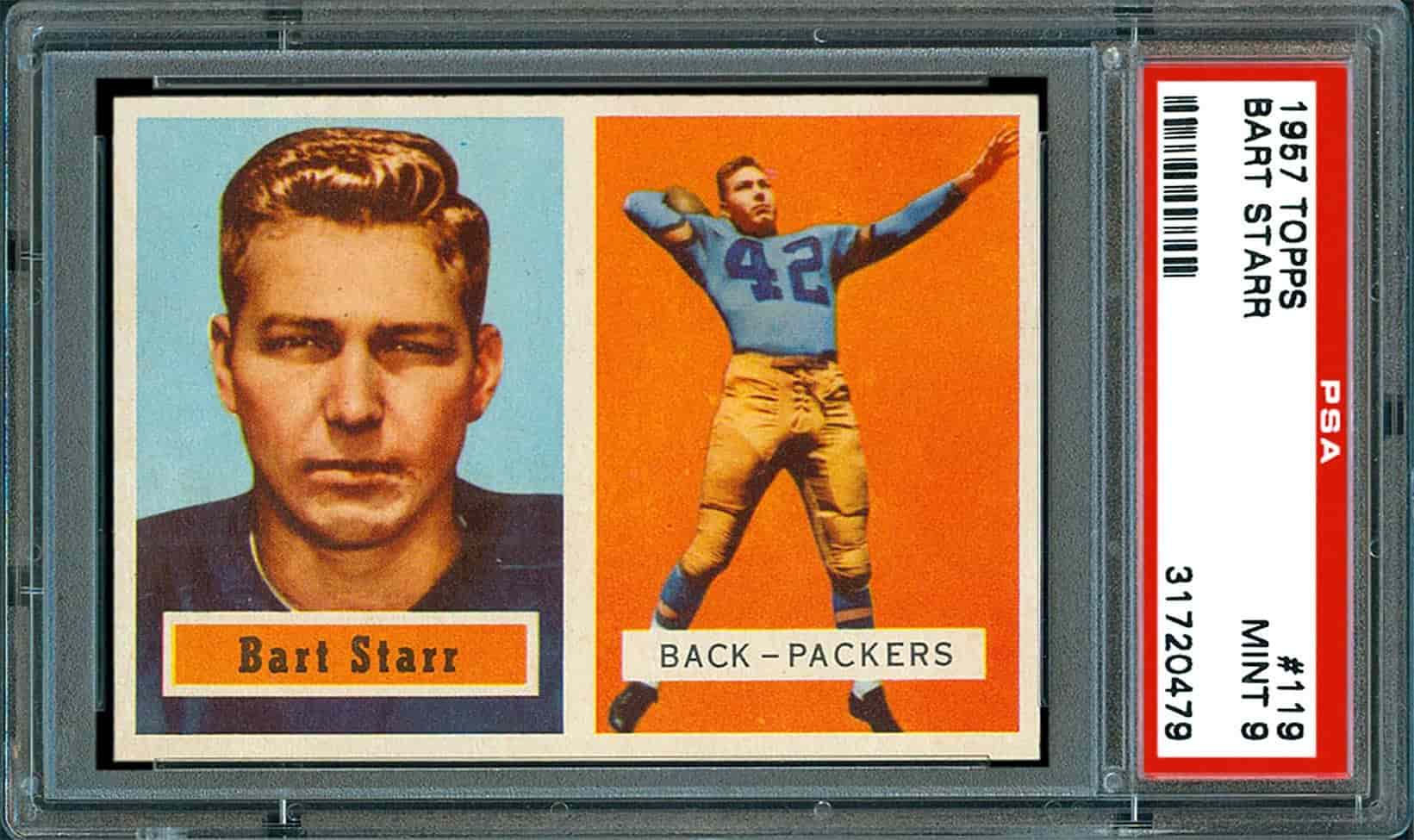 Professional football player and coach in the NFL, Bart Starr is widely recognized as the first quarterback to win the Super Bowl and Super Bowl MVP Award. The veteran player’s rookie card is a very valuable piece of collectible in the world is also amongst one of the rarest.

While the PSA assigns a value of $125,000 to a MINT 9-grade rookie card, the only known 1957 Bart Starr rookie card covered in a PAS 9 case was sold at an auction conducted by the Heritage Auctions in February 2017, Because of its extreme rarity, the card was sold at a staggering price of $288,000 and continues to rise in value. 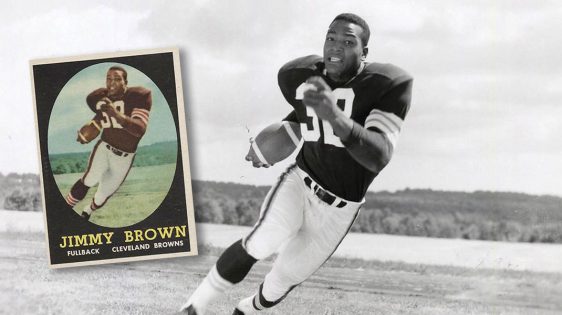 This particular rookie card is the most expensive football card ever sold in a PSA 9 case. Widely regarded as one of the most legendary running backs in the history of the game, the former Cleveland Browns star player is an inspiration to many.

The former NFL player’s 1958 Topps rookie card with an assigned grade of MINT 9, is undoubtedly one of the most prized possessions amongst sport cards collectors. In 2017, Jim Brown’s rookie card raised a lucrative sum of $358,000 at an auction and to date, continues to grow in value.

When the bidding is done, it is guaranteed to be a new all-time record paid for a football card. pic.twitter.com/Ls6QlhBCFj

Tom Brady is a name widely regarded as the best NFL player of all time. The seven-time Super Bowl champion has accomplished everything one can as a professional NFL star. The quarterback for the Tampa Bay Buccaneers was topping this list a few days ago.

Tom Brady’s rookie card is the 2nd most valuable football card of all time and has broken the all-time record several times. The NFL champion’s 2000 Playoff Contenders Auto Rookie Card was sold for a massive sum of $3.1 million in June of 2021.

The value of this card is as high as it is autographed by the legend himself. Whereas, another rookie card of his, was sold for over $55,000 in January this year. Collectors and fans from all over the world believe for a fact, that in no time, Tom Brady’s signature rookie card will take the number one spot again.

The previous record was a @TomBrady rookie card that sold for $3.1M in March.

Just a couple of days back, Patrick Mahomes made the headlines, when his autographed rookie card broke all the records previously held by the one and only Tom Brady. Quarterback for the Kansas City Chiefs, unfortunately, lost to Brady and the Buccaneers in the recent Super Bowl but have him beat in this regard.

The autographed rookie card is also the only one in the world. The biggest sports trading cards and collectible marketplaces in the world, PWCC informed the world that the 2017 National Treasures Platinum Patrick Mahomes rookie card was sold at a sky-high $4.3 million.

This transaction is also the all-time highest for a football card, shattering all previous records and as experts estimate, the card keeps on growing in value.