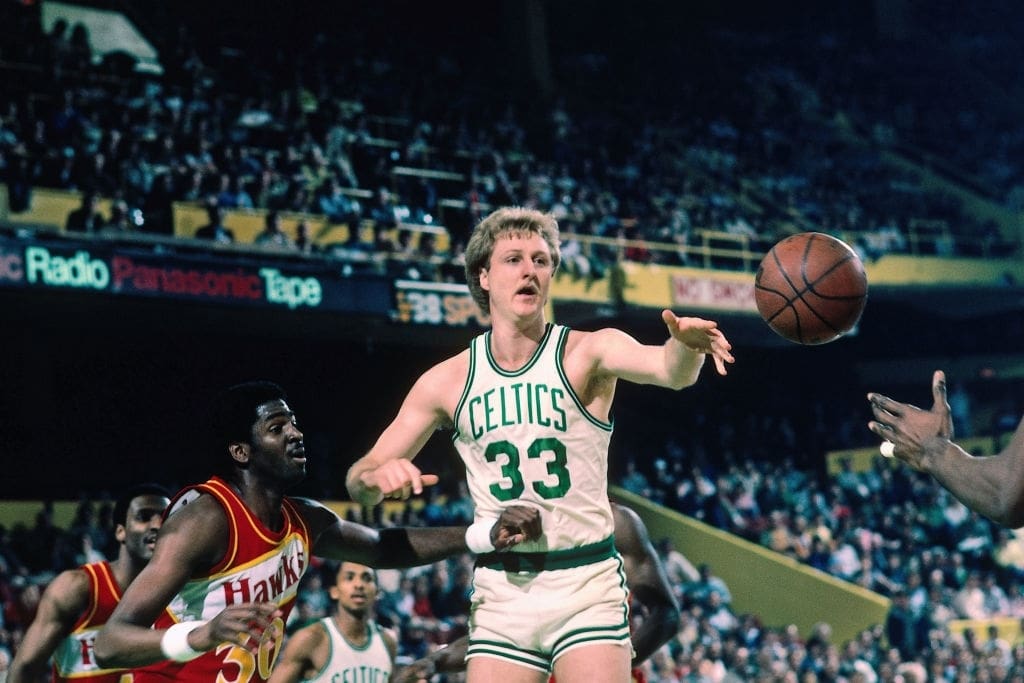 Larry Joe Bird, better known as just Larry Bird is regarded by many, as one of the greatest basketball players of all time and arguably the best shooter to ever play in the league. The NBA Hall of Famer has devoted over a decade to the NBA and even more to the love he has for basketball. Starting his career with the powerhouse that is the Boston Celtics in 1979, Bird concluded his career with the same team after a stretch of 13 years in 1992, winning three NBA championships.

In this long and well-lived career, The NBA legend has won three championships, named NBA’s Most Valuable Player three times, and has set the bar up pretty high, earning him top dollar during those years. Being regarded as one of the best to ever step on the court, the Hall of Famer has had several opportunities to grow his bank balance. Let us uncover everything that there is to Larry Bird’s net worth.

The former NBA champion has been retired for more than two decades now. However, that has not caused a dent in his bank balance. Based on extensive research conducted by our team, Larry Bird’s net worth as of 2021 is an estimated $75million. While several sources add to Larry’s wealth, his expenditure also plays a huge part in determining his annual net worth.

Nicknamed The Great White Hope, Larry has had various mediums to fetch his wealth from over the years. From his salary as an NBA player and a coach to his endorsement deals and other ventures, here is how the NBA Hall of Famer adds to his wealth. 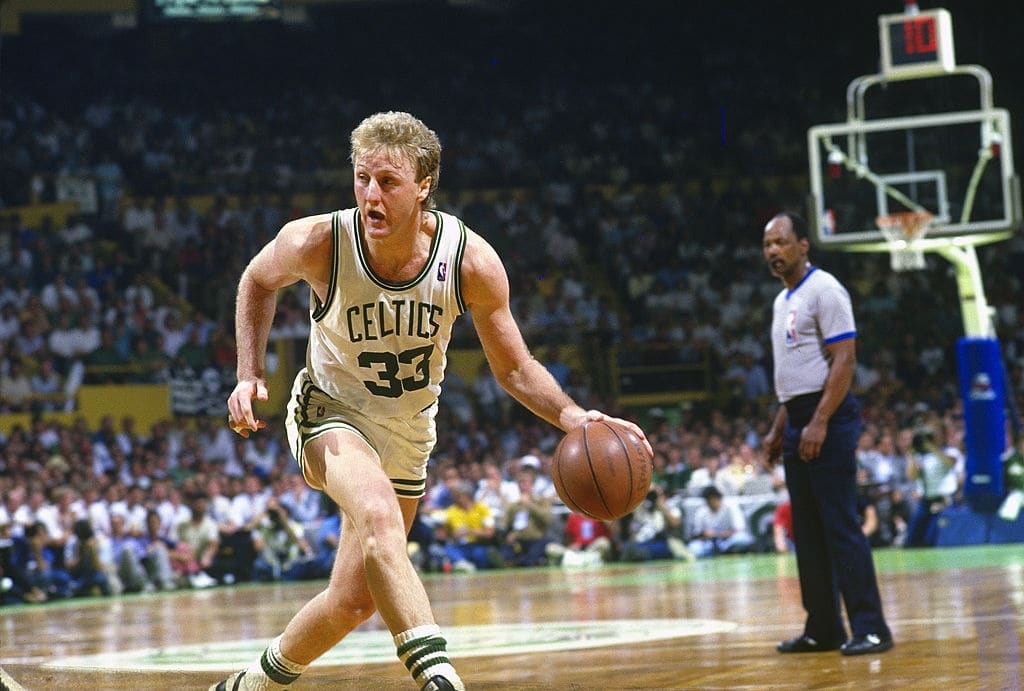 During the span of 13 years that Larry has devoted to the NBA, he has been one of the most consistent players during his time which helped him grow his salary tremendously from his rookie year. Bird was selected by the Celtics as the sixth overall pick in the 1978 NBA draft and the two parties signed a five-year contract worth over $3.25 million. During his rookie year, the veteran athlete earned an annual salary of $650,000.

Over the course of his career, Larry has renewed his contract three times with the Celtics. During the 1991-92 season, which was his second last season in the NBA, the former NBA champion earned a career-high annual salary of over $7 million. Larry retired with over $24 million in his pockets from his salary alone.

Even after his retirement, Bird continued to earn from the NBA as the head coach for the Indiana Pacers from 1997-2000. In a brief period of time, Bird helped the Pacers attain the best record in the franchise’s history and was named the NBA coach of the year. While an exact sum cannot be assigned to his earnings as a coach, it can be speculated that he earned well over a million dollars from this venture. 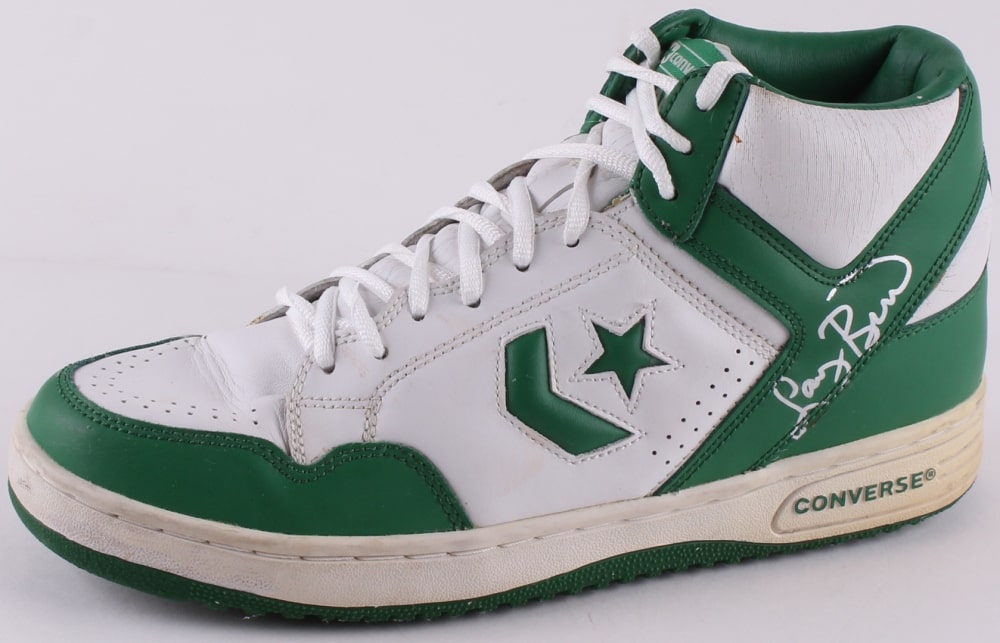 Even from the start of his rookie season, fans and brands all around were aware of the potential of greatness Larry had in him. Just like various stars of that era like Magic Johnson, Bird chose not to sign a shoe deal with big name brands like Adidas or Nike, instead, went on to sign a multiyear deal with shoe franchise, Converse.

Over the course of his long career, the NBA Hall of Famer was always rocking various different pairs of converse shoes. However, the shoe company never offered him the chance to launch his own signature line, some of the shoes worn by Larry became so iconic, that they were associated with him like his own signature pair.

It has been a long time since the NBA veteran has retired and so has this deal with Converse. However, some brands still find Larry very marketable and have signed deals with the retired star player. Larry Legend currently has brand deals with Footlocker, Heinz Corporation, and AT&T. While an exact amount cannot be assigned to the sum of money he has earned from these brand endorsements, it is speculated that the sum is around a million dollars. 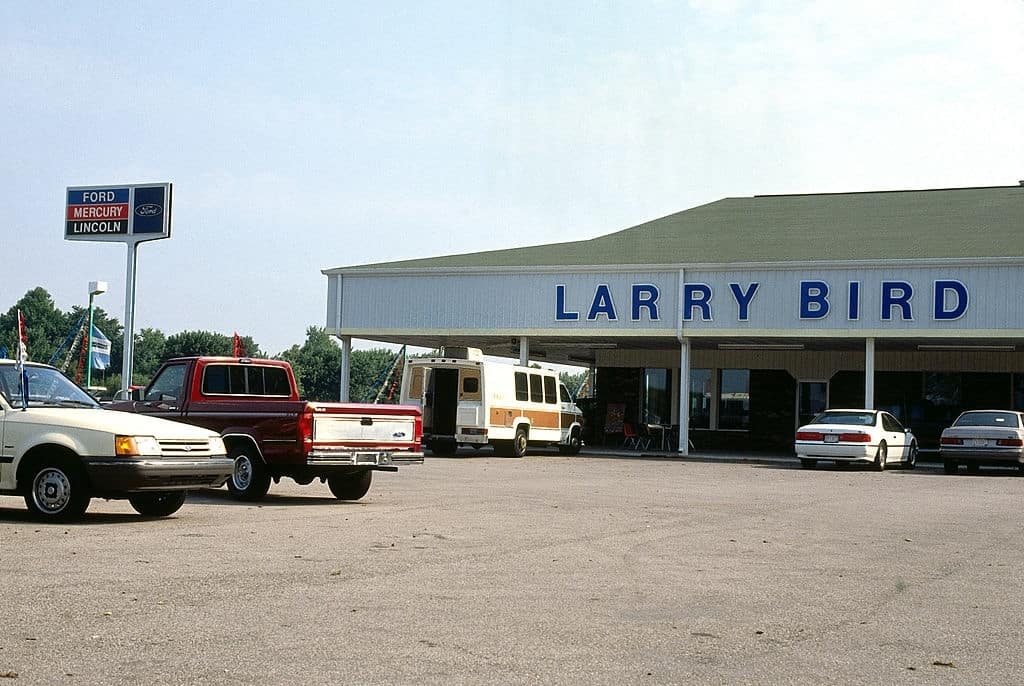 Even after retiring as a professional basketball player, Larry was not that far away from the court as he was assigned as the head coach for the Indiana pacers till 2000. In 2003, Larry was back in the NBA, but this time as an executive. The Indiana Pacers hired the NBA veteran star player as their president of basketball operations. That same year he was named the NBA Executive of the Year.

Due to health issues, Bird stepped down from the post in 2012. Finally, The Great White Hope joined the executive team again in 2013 followed by his departure in 2017. Also, interestingly enough, Larry Bird also owns a car dealership in the state of Indiana called the Larry Bird Ford Lincoln dealership.

To date, Larry Bird enjoys the status of one of the most marketable players in the history of the NBA. Due to his poise and dominance of the court, Larry has had the opportunity to make appearances in three-movie, each time playing himself: Blue Chip in 1994, Space Jam in 1996 alongside basketball legend, Michael Jordan and Celtic Pride in the same year.

Larry Legend has also been featured in several commercials with brands like McDonald’s, FootLocker, AT&T, Dr. J, and a few others. Further, Larry alongside fellow basketball legend, Magic Johnson wrote a book together titled, When The Game Was ours which sold thousands of copies all over the world.

Finally, the NBA Hall of Famer has also been a major part of the gaming franchise, making appearances as a playable character in games like One on One: Dr. J vs. Larry Bird, Jordan vs. Bird: One on One, and in the revamped NBA Jam. Bird was also featured on the cover of NBA 2K12.

How Larry Bird Spends His Millions?

Earning over $24 million during his time from the NBA, Larry has amassed quite the massive which enable him to lead a lavish lifestyle. From owning beautiful houses to fast and expensive cars and everything in between, Larry leads a lifestyle, most people can only dream of. While he spares no expenses on himself, Larry legend also spends a fortune in the field of philanthropy. Here’s how the Celtics’ Hall of Famer spends his hard-earned money.

Over the years, Larry has owned two beautiful and lavish mansions. The first one on this list is his home in Washington Township, Indianapolis worth a massive sum of $2.35 million. The luxurious estate was bought by the NBA legend in 2003. The house offers a massive living space of 10,232 square feet sitting on 1.5 acres of land while featuring five bedrooms, eight bathrooms, three fireplaces, a walk-in closet in the master bedroom, a suite, and a garden tub.

The house also offers a tennis court, a pool with kitchen, a dedicated games rook, home theater, and finally a wine cellar. However, in 2019, Larry listed this mansion for sale with an asking price of $2.4 million. 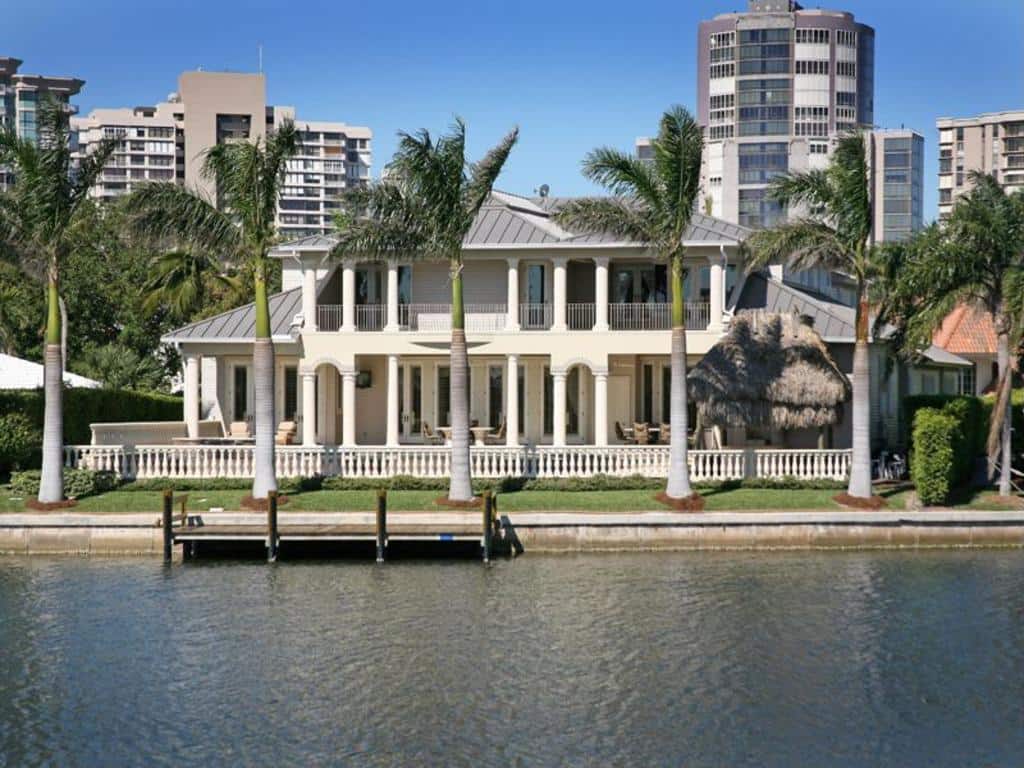 Before listing this house for sale, Larry had another house on the market for an asking price of $5 million for over eight years, which he decided to hold on to and which makes his current residence. Bird’s massive mega-mansion in Naples, Florida is a $5 million dollar home with a living space of 6,007 square feet. The custom mansion features four bedrooms, six bathrooms, a gourmet kitchen, a state-of-the-art home theater, an infinity pool, and a four-car garage. 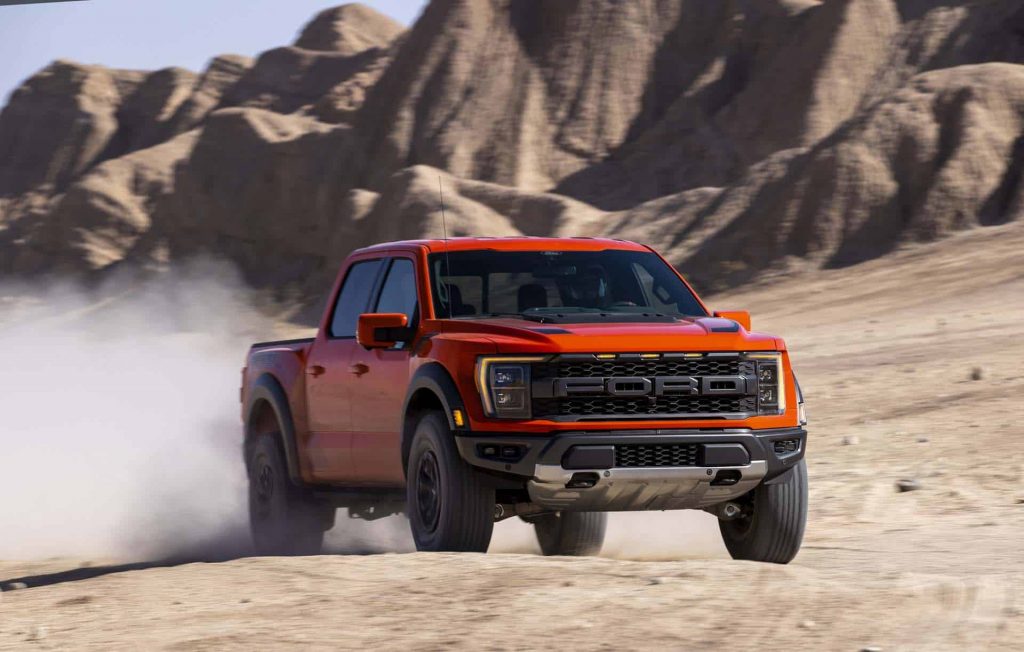 While information regarding Larry Bird’s car collection is very scarce, we do know for a fact that the NBA Legend owns a few really expensive sets of wheels like his Ford F150 Truck which costs anywhere from $30-40,000. Since the hall of Famer also owns a car dealership, it is highly likely that he owns a lot more.

Larry Bird is probably most well-known for his arrogant and smug personality on the court. However, his sweet and warm endeavor off the field is a big part of what makes him stick out. The former NBA champion is a very active philanthropist and tries his best to make the world a better place. Larry is currently the honorary director of the American Foundation for Suicide Prevention and makes it his primary duty to support the non-profit organization. 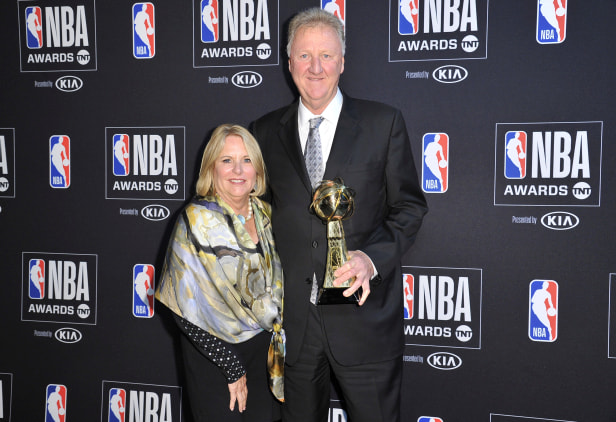 Dinah Mattingly is the second wife of Larry Bird and the two tied the knot in 1989. Since then, they have led a happy and peaceful life with their two adopted children, Conner and Mariah. Although the celebrity wife came to the limelight after her connection with Larry was made public, she was also a professional athlete and an entrepreneur but did not get much recognition. According to our reports, Dinah Mattingly’s net worth as of 2021 is close to a million dollars.

How will Kawhi Leonard’s Earnings from the League Change After Declining Player Option?
Top 10 Best Ball Handlers in NBA History