10 Oldest NBA Rookies of All Time 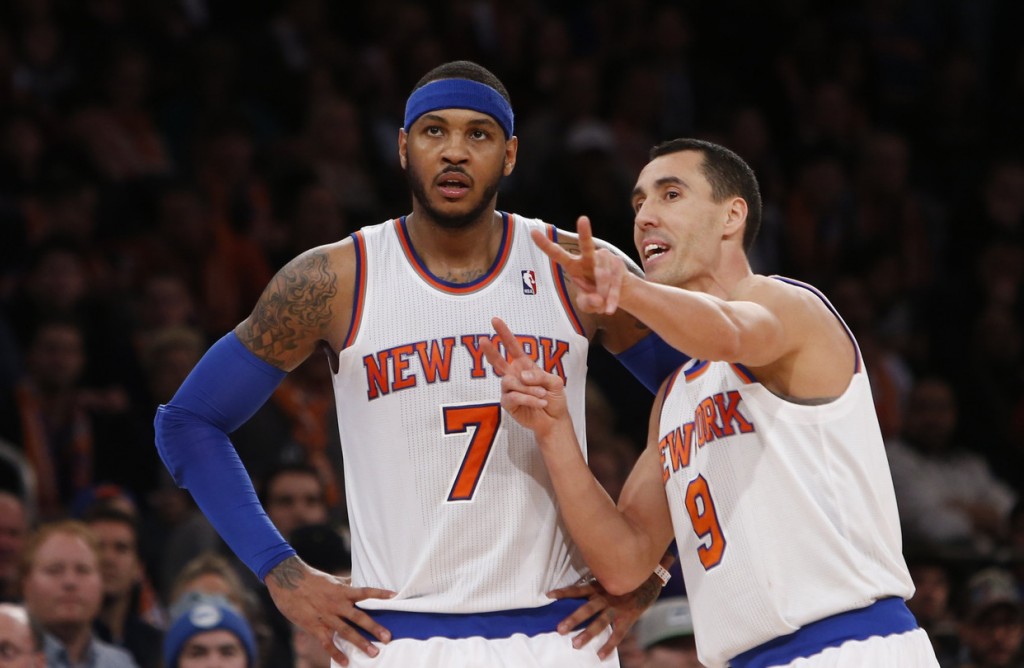 Playing for an NBA team is a dream of every basketeer in any part of the world. Players like Kevin Garnett or Kobe Bryant joined the league of professionals straight out of the high school. For some, making a debut was a delayed undertaking.

Many of these late starters spent the good years of their youth playing overseas and managed to secure an NBA contract only at the age known to be good for retiring. Yet, these late comers weren’t essentially void of talents, and a proof is Arvydas Sabonis who is a legend and among the finest Europeans in the NBA.

Here, we’ll talk about the oldest NBA rookies picked by NBA teams only to fill in certain positions they desperately want to fill in.

Most of these players came from foreign soils, especially European countries except only Andre Ingram who is the NBA’s oldest player born in America to start playing professionally. 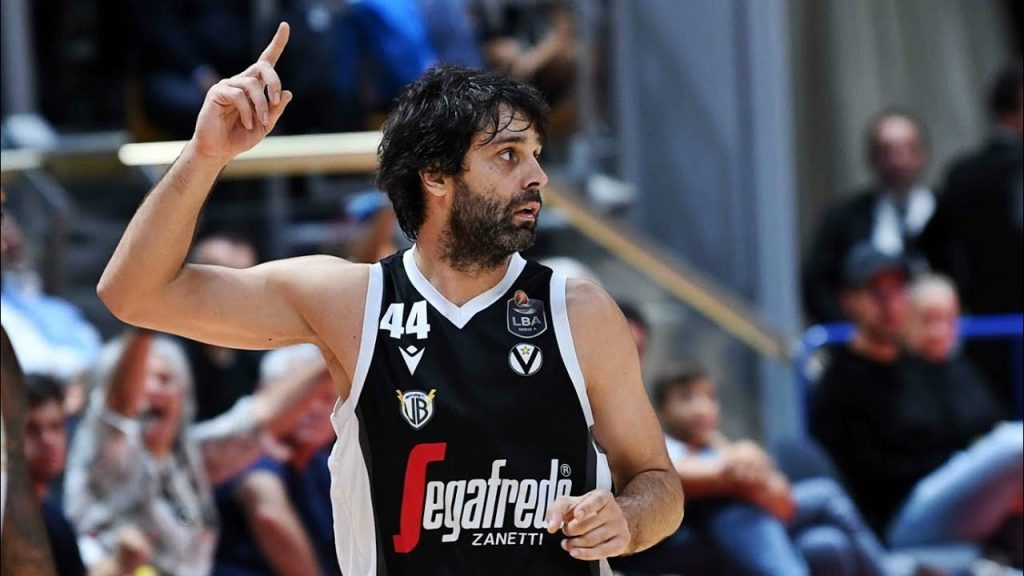 With three different Serbian national basketball team (the U-16, U-18 and U-20), he won three European championship titles. As he grew older, he played with the senior national team.

One of his notable performances was when they won 87-78 over Spain with 22 points from Teodosic and he was voted best player in the competition with 16 points, 5.4 assists and 2.6 rebounds averaged per game.

In 2017, Teodosic (aged 30 back then) signed with the Los Angeles Clippers and started to prove that the Clippers weren’t wrong about him. He was an excellent passer due to his nature as a pass-first guard. Teodosic is a combo guard; so there’re only some occasions on which he handled the ball.

However, he could run around the court and move without the ball so actively that most of his points were from wide-open layups or corner treys. His career in the NBA lasted long enough until 2019 when he was waived by the Clippers. 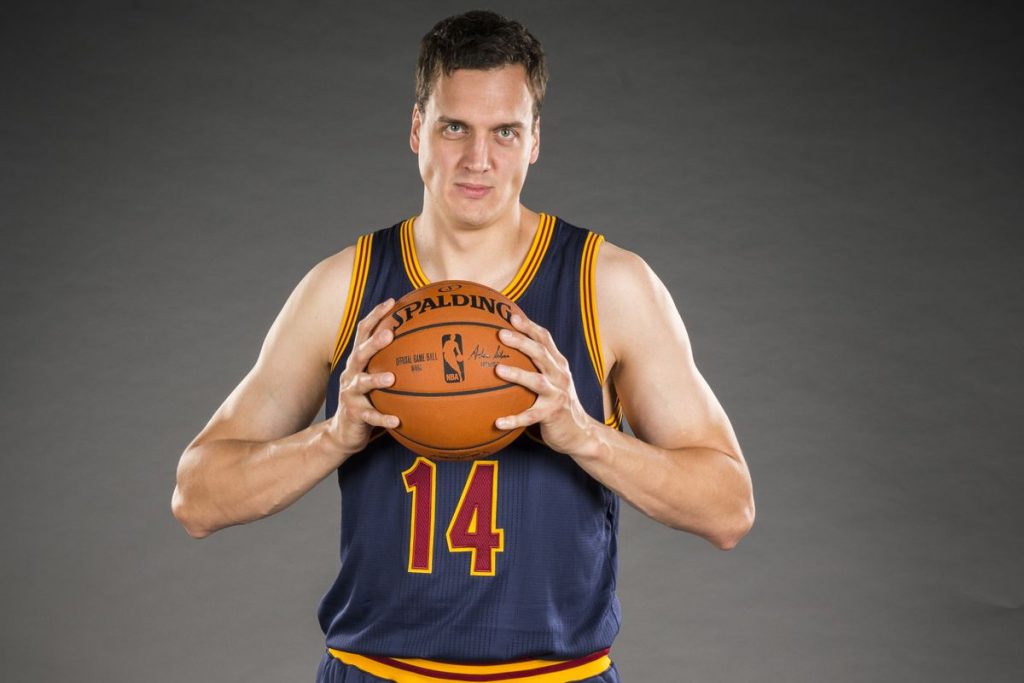 Kaun moved to the United States at the age of 16, and it was in Florida that he began to play basketball for his high school team. He then played 4 seasons for the University of Kansas Jayhawks. He won the University Championship in 2008 with Brandon Rush and Mario Chalmers, who later met him in the NBA.

In the 2008 NBA Draft, he was selected by the Seattle Supersonics as their 56th pick becoming the last draft pick in the history of the franchise. He was then traded to the Cleveland Cavaliers although he did not play a single game in the NBA.

In 2015, Kaun signed with the Cleveland Cavaliers and played his first NBA game against the Memphis Grizzlies. He reached 30 by that time. His NBA career was quite short. In 2016, Kaun was traded to the Philadelphia 76ers where he announced his retirement that same year. 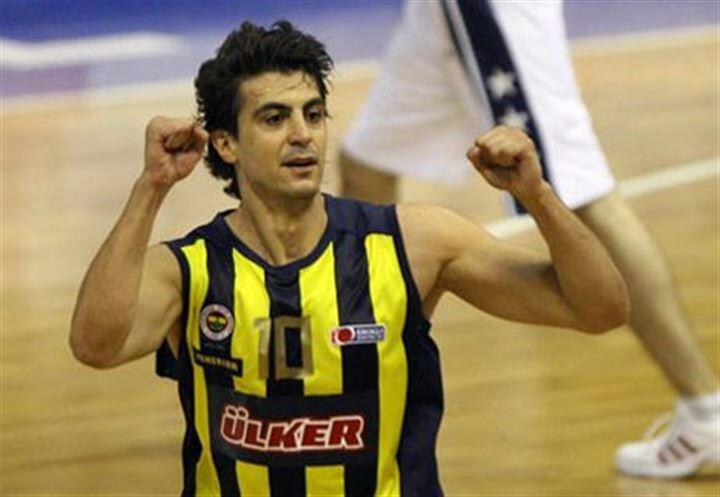 Ibrahim Kutluay was a Turkish who played as a combo guard. The Istanbul-native who stands 6’6” averaged 14 points during the 2003-04 EuroLeague season while playing with Ulker Spor Kulbu Istanbul.

He used to serve as the captain of the Turkish national basketball team too where he played two games against USA National Team during exhibition games before the beginning of the 2004 Olympics. In those  games, he made 12 of 23 three-point shots and scored 19 and 26 points respectively.

In 2004, Sonics General Manager Rick Sund announced the Seattle Supersonics’ signing Ibrahim Kutluay. However, the terms of the contract were never disclosed.

Already 30 years old by the time he played his first NBA game, Kutluay brought veteran experience and great leadership to the Supersonics. Besides, he was a good spot-up shooter which fitted Supersonics’ playing style back in 2004. 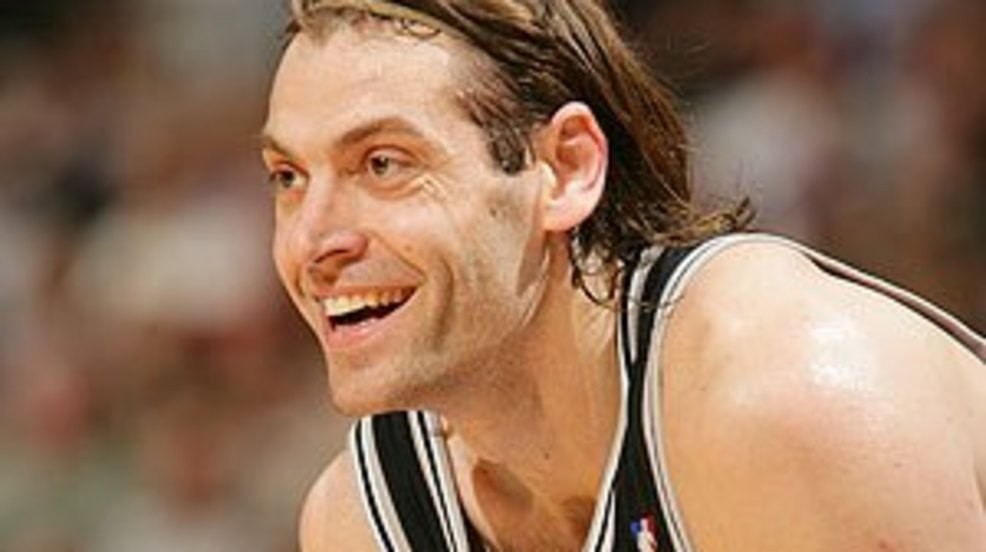 In the summer of 2005, the San Antonio Spurs signed Fabricio Oberto who was then almost 31 years old. Well, the Spurs are known to be fond of globalization while picking players from the USA and beyond, especially Europe, but nobody knew what attracted the coaching staff to sign Oberto at that time.

Oberto has been a professional in overseas basketball league since 1993. Some of the international clubs he has ever played for include Atenas, Olympiakos, Tau Ceràmica and Pamesa Valencia. The Argentine also found a fellow countryman in the Spurs, Manu Ginobili, who helped him to adapt to the NBA.

With the Spurs, Oberto played for four seasons before continuing his career with the Washington Wizards and the Portland Trail Blazers. Although he was old for his debut, at least he got a championship ring playing for Spurs in the 2006/2007 season. 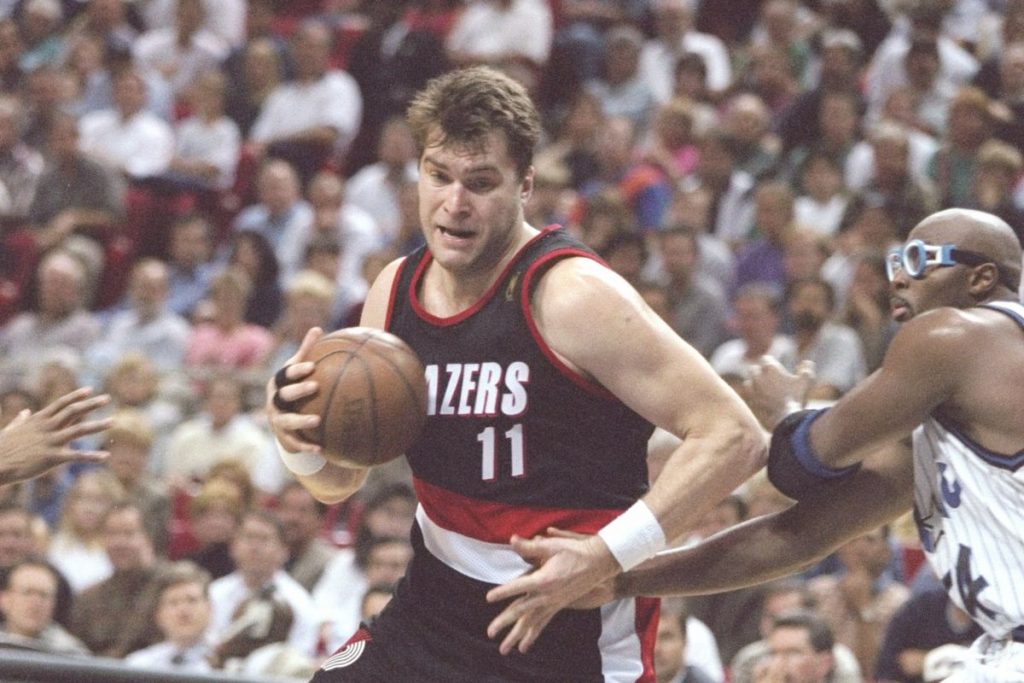 Sabonis is said to be one of the best Europeans in the NBA of all time. Together with Rimas Kurtinaitis and Šarūnas Marčiulionis, he belonged to the golden generation of Lithuanian basketball players who, from the early 1980s, achieved biblical success for the Soviet Union.

With his precise passes, Sabonis left the fans in ecstasy long before he took the step across the Atlantic. The 2.21-meter giant revolutionized the center game with his passing skills. The Lithuanian only joined the Portland Trail Blazers in a quite mature basketball age of 31.

In 2008, Sabonis was recognized as one of the 50 most important players in the history of the Europa League. In August 2011, he was also inducted into the NBA Hall of Fame, but unfortunately he ended his career as one of those greats who never made an All-Star team. 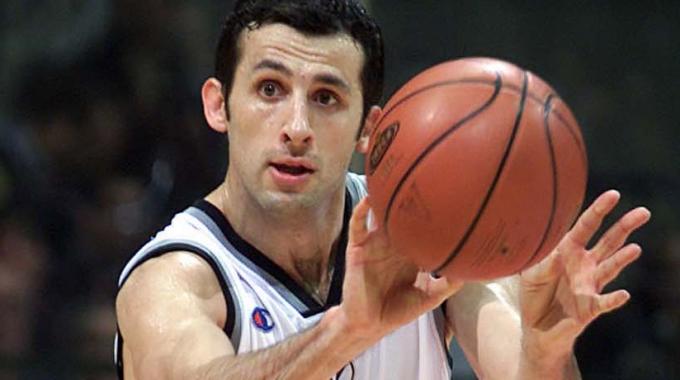 Like LeBron James, he was nicknamed The King in Italy where he spent a large part of his career. Rigaudeau began his basketball journey with Cholet Basket, a French basketball club. He played his first national game at the age of 16. In his career with the youth club, he won the league MVP four times.

During this period, he made his first attempt to join the NBA by playing in a Summer League based in Utah with the Houston Rockets but didn’t manage to get an NBA contract before reaching 31.

Opportunity knocked at his door in 2003. By January that year, he was signed by the Dallas Mavericks. However, Don Nelson already had Steve Nash and Nick Van Exel to play guards. Also, the individualist and stereotypical game of the NBA did not allow him to show his qualities.

Don Nelson most often deployed him as a small forward which was not his position. The experience was not really satisfying, as Rigaudeau was only allowed to play 11 games with the Texan club in which he averaged 1.5 PPG and 0.5 APG playing only 8 minutes per game. 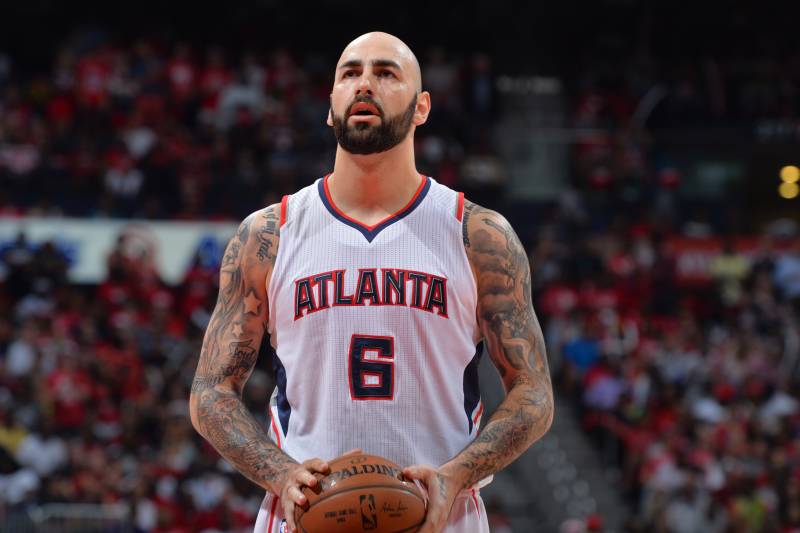 Pero Antic is a Macedonian who became a rookie in the NBA after 31 years of age. He played for the Atlanta Hawks where he started as center and played 26 of 50 games for the side in his first year scoring 7.0 points and 4.2 rebounds on average.

He is a very tall center and marksmanship is one of his great specialties. With the Hawks, he reached the 2014 NBA Playoffs but were eliminated in the first round.

After a string of solid performances under the Hawk jersey, Antic was invited to participate in the Rising Stars Challenge game for the 2014 NBA All-Star in New Orleans. A right ankle injury reduced him to miss the All-Star weekend. He was replaced by the center of the Phoenix Suns Miles Plumlee.

He participated in 113 games during his NBA career and averaged 6.3 points per game during the period. 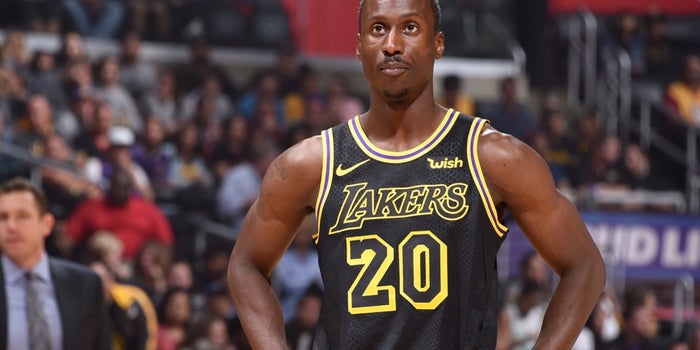 Amid an injury disaster and a very low possibility to qualify for the 2019 NBA Playoffs, Andre Ingram joined the Los Angeles Lakers after playing in the NBA G League for South Bay Lakers. He got a 10-day contract in the remaining 17 games the Lakers would play and became one of the oldest basketball players to begin.

This is the second calling for Ingram to the NBA with the Lakers. In the 2017-18 NBA season, Ingram, who has been playing for more than 10 years in the G League, got a chance to play the last two Lakers games. His story grew viral when he posted 19 points in his debut game.

Ingram is indeed known as the best shooter in the G League. His name is at the top of the league’s list of top three-point scorers with a total of 768 shots made. He got a 215-shot margin from the player ranked second on the list but is yet to make it to the list of most accomplished NBA shooters. 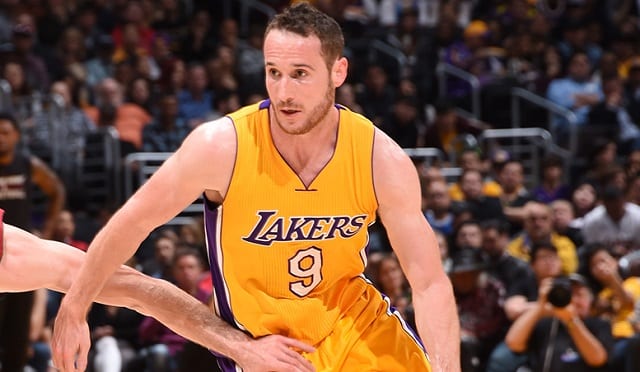 Huertas comes from Brazil and plays as a point guard. In 2016, he joined the legendary purple and gold NBA team, the Los Angeles Lakers as a 32-year-old debutante. He has previously played for FC Barcelona in Spain from 2011 to 2015 prior to becoming one of the oldest basketball players ever to start an NBA career.

His first season was not bad after all. He averaged 4.5 points, 3.4 assists and 1.7 rebounds per game. The number may seem low but it was fine considering he only played 16.4 minutes per game. For the first half of the season, he did not get a lot of playing time although he managed to earn more minutes in the next half.

While welcoming Huertas for playing in the NBA for the first time, the Lakers also announced the signing of Jose Calderon who has the same playing style as Huertas’s ‘Pass-first guard’. 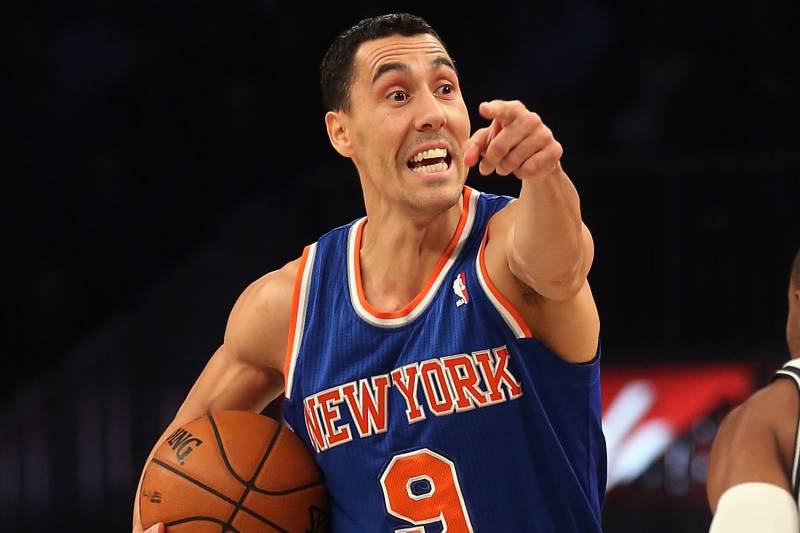 In 1999, Prigioni played for Baloncesto Fuenlabrada but found his best friend, Luis Scola, another NBA player from Argentine, in Spanish club Caja Laboral.  In 2012, Prigioni became a free agent and the Knicks really needed a point guard.

Prigioni went to New York for a workout and impressed the coaching staff with his passing ability. Prigioni has played professional basketball overseas for 15 years and that was the first time he played in the NBA. He became the oldest NBA rookie in history.

During the first 3 preseason games, Prigioni recorded a total of 19 points, 28 assists and 6 steals. Prigioni was a smart ball handler for pick-and-roll situations. Had he been in the league a few years earlier, his chances to be among the greatest ball handlers would be strong.

His ability to quickly get past his defenders and dish some cool assists for his teammates was remarkable. Defensively, he was aggressive and eager to steal the ball from his opponents most of the time.