Real Madrid Ready to Lock Down Vinicius Jr., Proposing €10M a Year until 2028 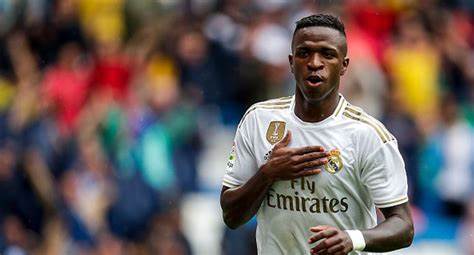 Real Madrid are set to reward star winger Vinicius Jr. with a new contract that will run until 2028 following his spectacular form this season.

According to reports in Spain, Los Blancos will offer €10M/year to the Brazilian, who has been in superb form this season. After coming in with a lot of hype, Vinicius Jr. was severely criticized for his profligacy in front of goal. This season, though, he has altered the narrative.

The Brazilian international has scored 21 goals, and also registered 20 assists in all competitions this season. He has been a pivotal part of Real Madrid regaining the La Liga crown this season. Besides the league, Vinicius has also been instrumental in Madrid’s journey to the Champions League final. He has formed a deadly partnership with striker Karim Benzema. The two have made Real Madrid an intimidating opponent to play against.

Following his exploits, Madrid are rumored to be preparing a new contract for the former Flamengo man. The deal is set to run until 2028, and will also increase his release clause from €350M to €1 billion.

🚨 Real Madrid have made a contract offer running until 2028 for Vinicius Jr. 🇧🇷

The objective is also to increase his release clause from €350M to €1 billion.

With 50 appearances this season, he is slowly becoming an unplayable member of Carlo Ancelotti’s side. Although  talks are yet to begin, it is expected negotiations will begin once Madrid finish playing the Champions League final.

Vinicius’ current deal with the club runs until 2024. He will be hoping to lift his first ever Champions League title when Real Madrid take on Liverpool at the Stade de France on May 29th.

The Nominees For The Premier League Player of The Season Have Been Revealed and There Are Some Players Missing!
Transfer Rumor: Barcelona Set to Seal a 3 years deal with Robert Lewandowski, Bayern Munich yet to Confirm