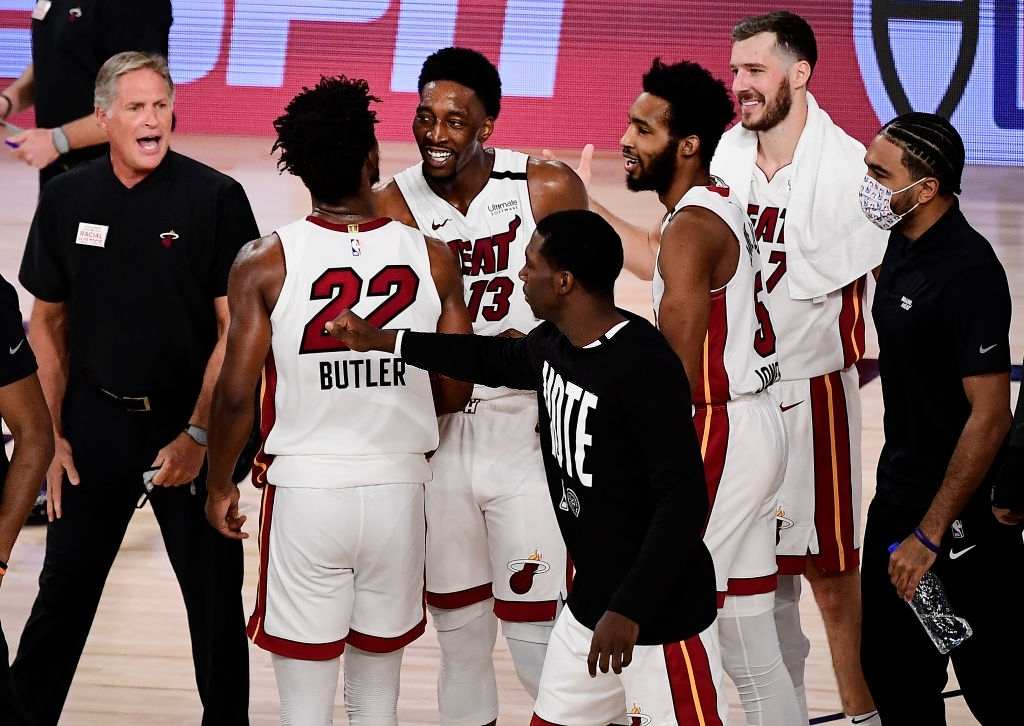 The Lakers vs. Miami Heat, game 3 of the NBA Finals, is about to begin, and the Miami Heat team is down by 2-0. To add more salt in pain, their starter Goran Dragiç won’t be playing in game three because of his torn plantar fascia injury, putting the Miami Heats in a very tight spot. LeBron James is scoring almost a triple-double in the playoffs, and AD is averaging over 30 points in the postseason. Does Miami Heat have any answer to that?

Dragic and Bam Adebayo uncertain to play in game 3

Their other superstar Bam Adebayo is also injured. He has hurt his left shoulder and has a neck strain. He missed some valuable minutes in game one and couldn’t play in round two. Apart from Goran and Adebayo, Jimmy Butler also had a bad landing and hurt his ankle in game 1. But still, Jimmy was able to play in round two. However, that wasn’t enough to beat LeBron and his Lakers.

So, having two of the main starters injured, it’ll be a tough job for the Heats to pull off a single victory, let alone the whole series. And the way the Lakers are playing, it seems like the Miami Heat is on the verge of getting swept within game four against the Lakers.

Since Dragic is out, Tyler Herro gets to play in the starting five. Not to mention but he is the youngest player in NBA history to play in the NBA finals. His performance was terrific in the playoffs of this NBA bubble as he had two thirty point games against the Celtics in the Eastern Conference Finals. Tyler is currently averaging 16 points per game in the postseason.

Dragic was rounding up around 20 points per game in the playoffs. Erik Spoelstra didn’t rely on Tyler in game 2. He gave Kendrick Nunn a chance to fill in the spot of Dragic who scored 13 points and was 43% from the floor. Unfortunately, that’s not even close to enough to close out the series against the Lakers.

Where should Erik Spoelstra make changes in his game plan?

Erik Spoelstra made some changes in game two. To even up the matchup against Anthony Davis and LeBron James, he decided to go with the big man line up with Mayers Leonard and Kelly Ollynyk. But still, that wasn’t enough. In-game 2, the heats gave up a lot of offensive rebounds. So the only way that the Heats have a chance to win the NBA Finals is to ensure that they get all the rebounds and double-check the Laker’s two superstars. If the Lakers bench has a stormy shooting night, only then will the Heats win the game. But the Heat has to make their perimeter shots and free throws.

We’ve seen that the coach Erik prefers zone defense, but the Lakers took the advantage in game two by founding a gap in the middle of the zone and making plays by pick and roll and cutting through. So to defend themselves and avoid sweep, Butler and Co need to modify their zones.

After the Game, their rising star Tyler Herro said, “We are down 2-0, The message is that our backs are against the wall, and how are we going to react? We can either fold or fight as the Miami Heat do. We know what kind of team we are and what we are capable of.”

Erik Spoelstra, after game 2, also spoke about the team’s planning and goals. He said,” We are trying to get something accomplished. You have to go to another level, If you want something badly enough, you’ll figure it out, and that’s the bottom line.” He added, “Our group is extremely stubborn, persistent. We need to figure out how to overcome this opponent. We respect the quality, high quality, of the opponent that we’re playing. You’ve got to figure it out and overcome it.”

If the Heat doesn’t stop the King and AD, then Pat Riley and his Miami Heat can say goodbye to the NBA Finals 2020. And LeBron will get his fourth ring, and AD will win his first NBA Finals Championship. If you are a Lakers fan, check out our other articles regarding LeBron and Los Angeles Lakers.