Top 10 most influential NBA players of all time

The NBA has witnessed tons of top superstars grace its court in its storied history. From the likes of Kareem Abdul-Jabbar to Magic Johnson and now LeBron James, fans have had the opportunity to witness history being made and broken on a regular basis.

While there have been plenty of players who ave sparkled on the court and then faded away into obscurity following their retirement, there are others who have lived long in the memories of the fans not only due to their performances on the court, but also their contributions to society.

These players have stood for various social causes over the years and have been the flagbearers of change in the NBA.

On that note, here, we take a look at the 10 most influential NBA players of all time:

(Honorable mentions: The likes of Steph Curry, Shaquille O’Neal, Julius Erving and Dirk Nowitzki have all played a massive role in shaping the NBA into what it is today, but unfortunately, miss out on a spot on this list.)

Jerry West had such an influence in the NBA that the logo of the league was molded in his image. West was the epitome of consistency during his storied career in the NBA, making the All-Star team in each of his 14 seasons.

He also led the Lakers to nine Finals appearances but managed just one championship. West was one of the most efficient shooters during his heydey and managed one scoring title, in 1970.

In 1979, West was inducted into the Naismith Memorial Basketball Hall of Fame while his No. 44 jersey was also retired by the Lakers a few years later.

West also had a major influence on the league as a coach, leading the Lakers to three consecutive Playoff appearances. He was also the general manager of the side that went on to win seven NBA championships.

West, like the other players on this list, also contributed enormously off the court. In 2000, a road outside the West Virginia University Coliseum was named the Jerry West Boulevard and seven years later, a bronze statue of West was honored outside the WVU Coliseum.

A statue of West was also unveiled outside the Staples Center, the Lakers’ home stadium, and he is also set to receive the Presidential Medal of Freedom from Donald Trump.

Oscar Robertson is best remembered for being a triple-double machine. While players like LeBron James and Russell Westbrook have notched up triple-doubles on a regular basis in the modern NBA, their achievements pale in comparison to what Robertson did in his heydey.

Robertson became the first player in NBA history to average a triple-double, achieving the feat in 1962.

Like many other African American players at the time, Robertson was a victim of racism throughout his NBA career, but battled hard against it to forge a successful career.

He is also credited for inventing the fadeaway jumper as well as the head-fake which were perfected by players like Kobe Bryant and Michael Jordan in subsequent years.

Robertson was also inducted into the Naismith Hall of Fame and also had a major role to play in the Robertson v. National Basketball Ass’n of 1970 which resulted in a reform of the league’s free agency and draft rules. 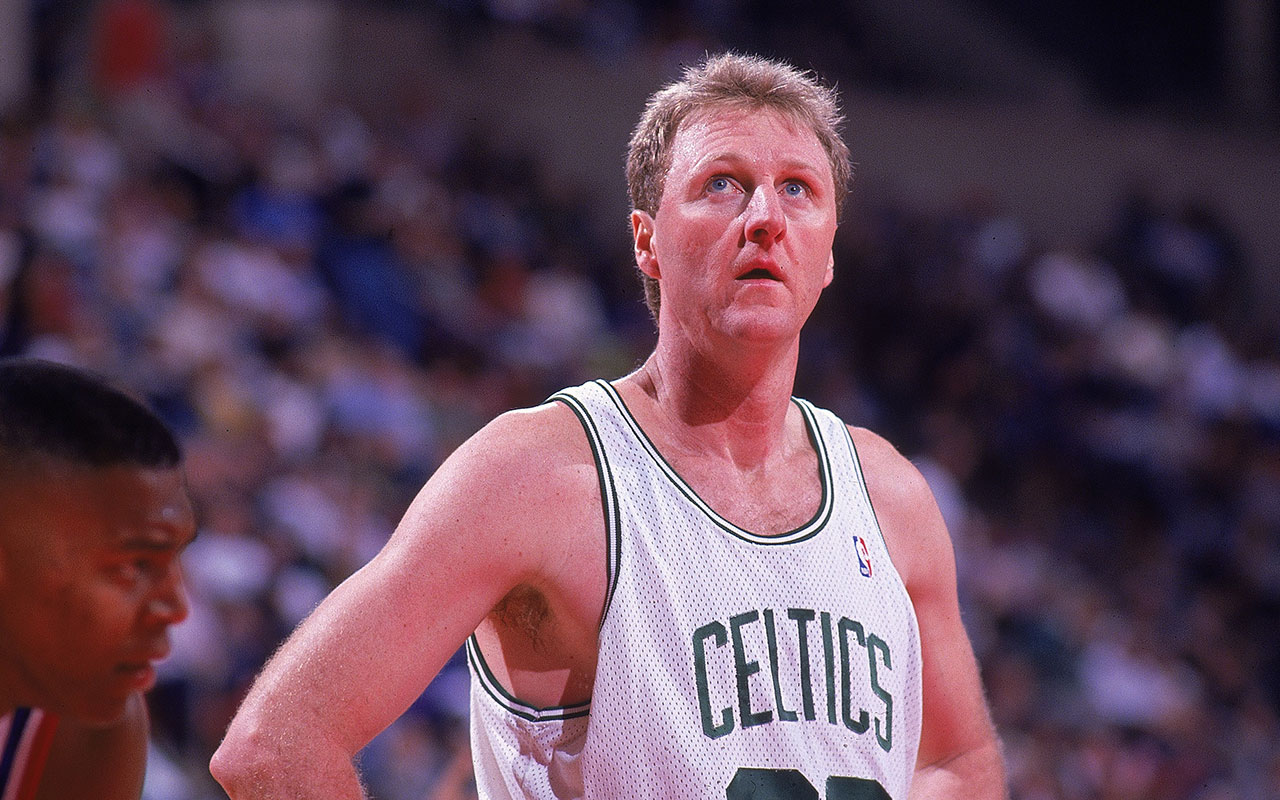 Larry Bird, along with rival Magic Johnson, was responsible for ushering in a new era of fast-paced, high-powered basketball, which, to an extent, paved the way for the NBA as we know it today.

Bird won three championships during his time with the Boston Celtics in a career ravaged by injuries. Bird was a prolific scorer and unparalleled passer of the ball – arguably one of the greatest passers the NBA has ever seen.

During his tenure with the Celtics, he epitomised the Boston culture with his fearless, gritty, arrogant, and passionate approach to the game. He was also the first player in the history of the NBA to win Rookie of the Year, MVP, Finals MVP, Coach of the Year and Executive of the Year.

Regarded as one of the greatest players of all time, Bird was inducted into the Naismith Memorial Basketball Hall of Fame in 1998 and once again in 2010. 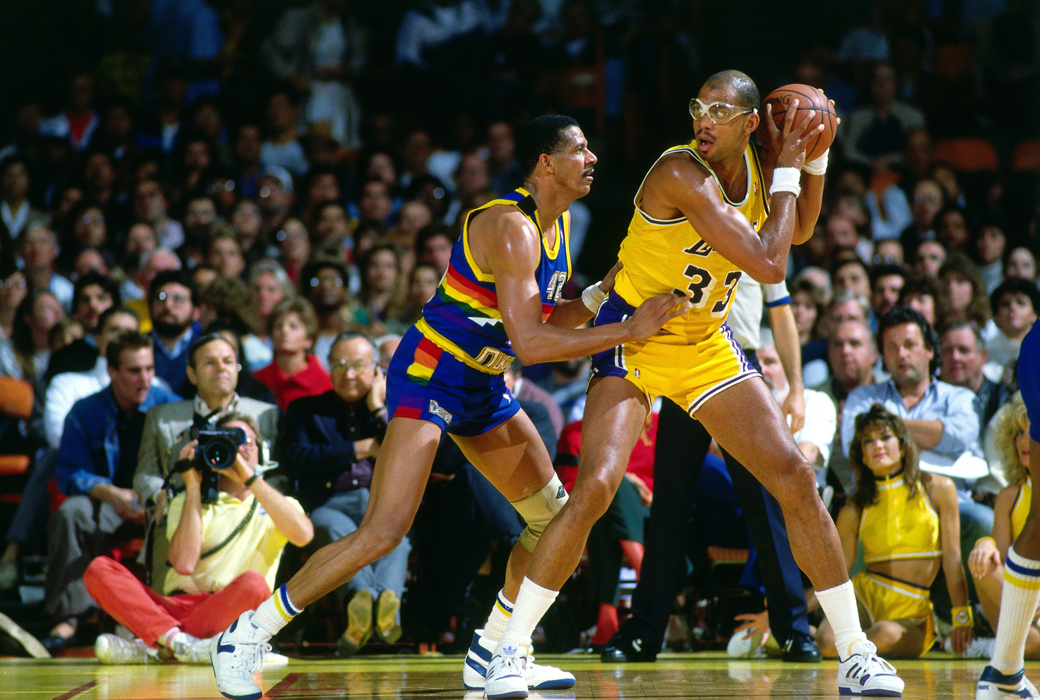 Kareem Abdul-Jabbar is widely considered to be among the greatest players to have ever set foot on an NBA court.

Abdul-Jabbar, born Ferdinand Lewis Alcindor Jr, is famous for patenting the sky-hook, his signature shot in which, using the sweeping motion of the arm, he would throw the ball in an upward arc with a follow-through that ended well over his head.

The Skyhook was virtually unblockable because of the height and distance from which it was performed and Abdul-Jabbar tormented oppositions with the shot.

Abdul-Jabbar was a six-time NBA champion and six-time league MVP and also earned several other accolades over the course of his illustrious career.

Following his retirement from the sport, he has served as an actor, coach and writer and was even awarded the Presidential Medal of Freedom by then-USA president Barack Obama.

He has also been an active contributor to discussions regarding race and religion. 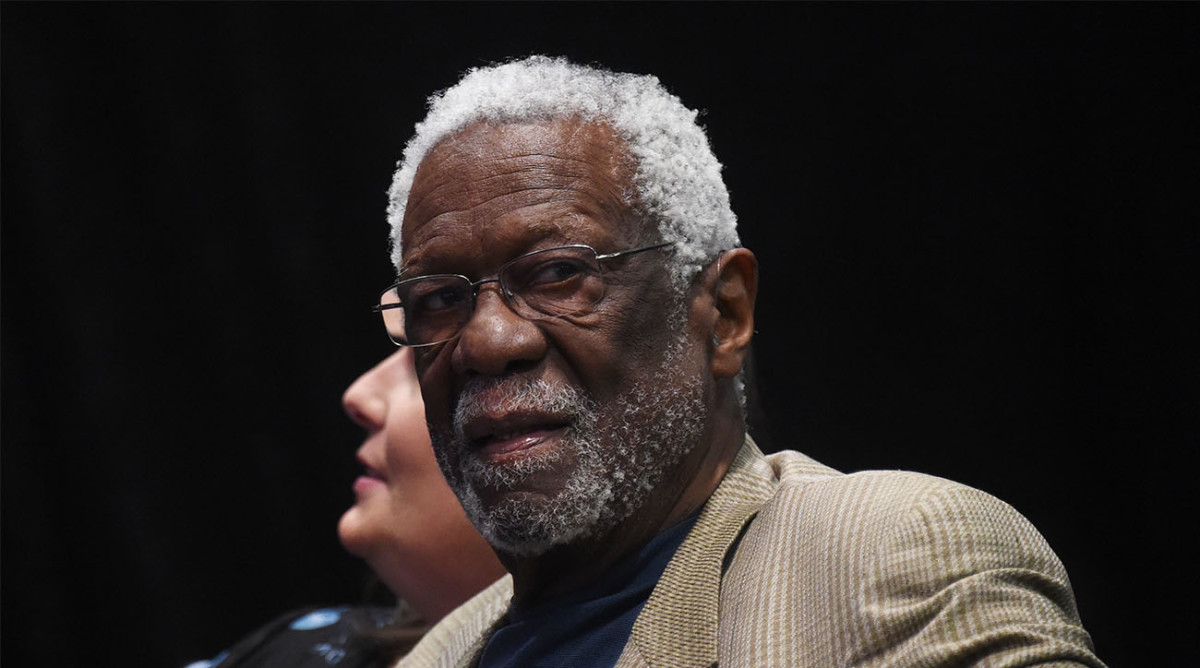 Bill Russell was a serial winner during his time in the NBA. He won a whopping 11 NBA titles which is the highest in the competition’s history.

Russell was never a prolific scorer, but he was an elite shot-blocker and more than handy rebounder. In 13 seasons with the Boston Celtics, Russell was named the MVP on five occasions and also made the All-Star team 12 times.

However, his contributions off the court were what truly shaped his legacy. A victim of racism his entire life, Russell worked hard to raise awareness about such issues, as well as about police brutality, poverty, bigotry, exploitation.

He was awarded the Presidential Medal of Freedom by Barack Obama for his efforts in fighting inequality and in the Civil Rights Movement. 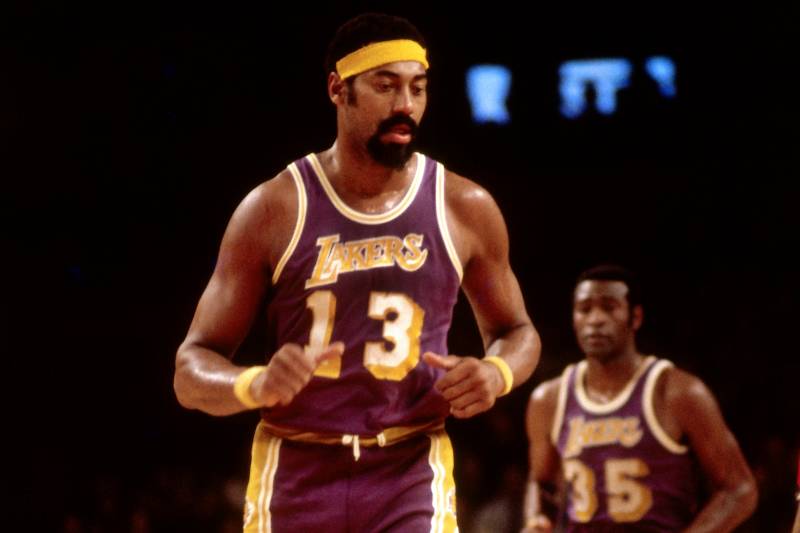 Wilt Chamberlain is considered one of the greatest players in the history of the NBA and set a multitude of records over the course of his career.

Chamberlain was an absolute machine when it came to scoring and rebounding. He led the NBA in scoring in seven seasons and is best remembered for his monster 100-point performance, a record which has stood the test of time and is unlikely to ever be broken.

Chamberlain’s other most notable achievement was a 50-rebound game which is unheard of in the modern NBA.

Chamberlain also affected the way in which the game was played. He was a gifted athlete and had immense strength to go with astonishing speed, which is a rare combo in a forward. He also had an incredible vertical leap and had the ability to outjump even the tallest of centers.

Chamberlain’s arrival in the league also forced a few rule changes, including the changed free-throw rule and the widening of the lane. 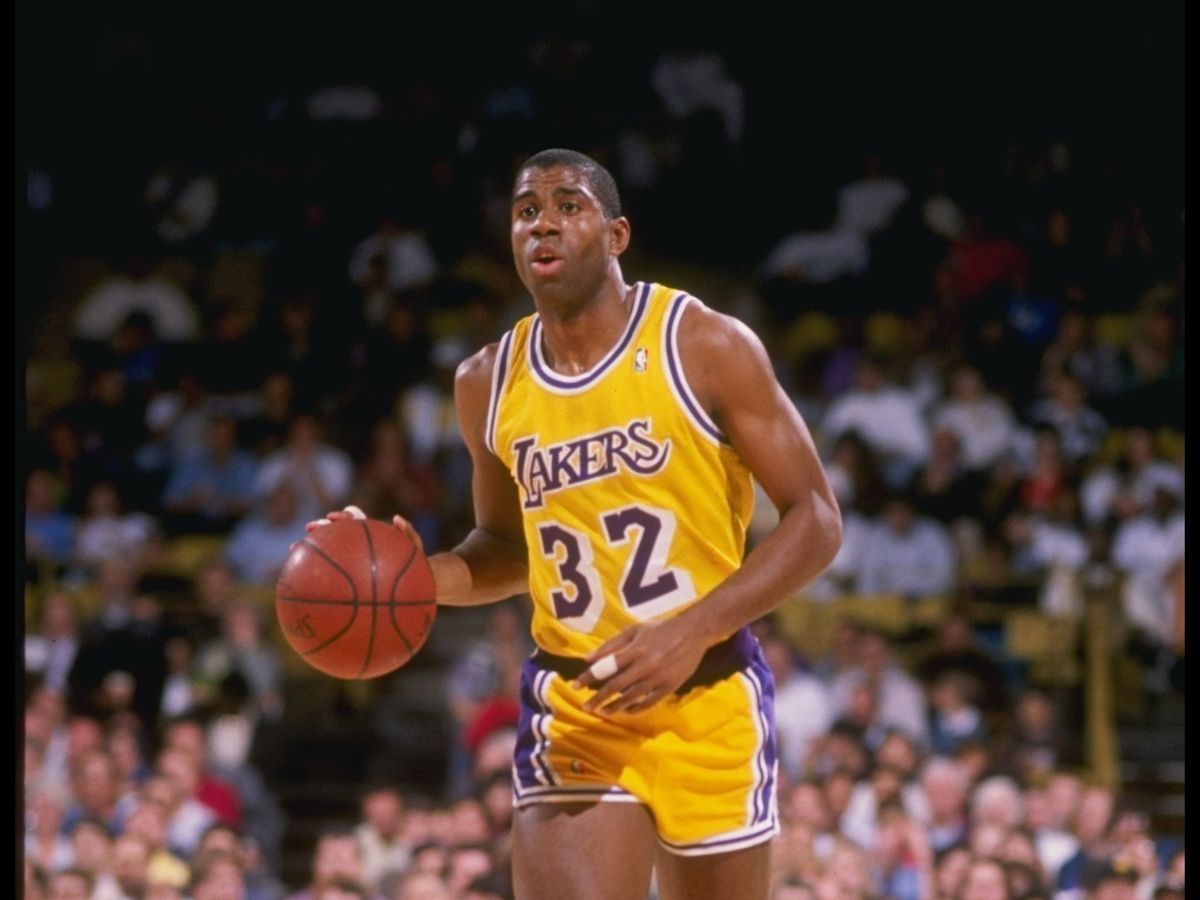 Magic Johnson was responsible for resurrecting the NBA and maintaining its relevance during the 1980s and 1990s. The leader of the Showtime Lakers, Johnson is one of the greatest point guards in the history of the game and finished with five championships to his name.

He had a storied rivalry with Larry Bird, who was with the Boston Celtics at the time, and their battles have been well-documented.

Johnson has played a major role in dispelling the myth surrounding HIV. He publicly announced that he had the disease way back in 1991 and was lauded for opening up about his struggles at the time.

Johnson has long been a vocal advocate for HIV prevention and has done everything in his power to spread awareness about the disease.

Following his retirement, he has been involved in multiple business ventures and was even a part-owner of the Lakers. His efforts meant he was named one of America’s most influential black businessmen by the Ebony magazine.

Kobe Bryant, despite playing in an era that featured LeBron James among others, was the face of the NBA for years.

Bryant represented just one franchise his entire career and developed a brilliant bond with the fans of the Lakers over the course of his 20-year stint.

However, he often had falling-outs with his teammates, most notably Shaquille O’Neal, who was forced out of the organization by Kobe himself.

Bryant also had a lot of pull with the Lakers organization and often had a say in determining which players to trade and which ones to sign.

Bryant is also renowned for his toughness and determination to succeed. He sacrificed everything to become a star in the NBA and help his side win multiple championships.

He is also considered the greatest clutch shooter of all time and made famous the Mamba Mentality, which, according to Bryant himself, is the constant quest for perfection and self-improvement.

However, his influence went way beyond just the NBA. He was famously given a stunning reception when Team USA headed to Beijing for the 2008 Olympics.

LeBron James is the only basketball player in history to be mentioned in the same breath as Michael Jordan.

James’ achievements on the court speak for themselves. He’s a three-time NBA champion, three-time Finals MVP, four-time league MVP, Rookie of the Year… the list goes on.

However, despite his longevity and sustained dominance on the court, LeBron’s contributions off the court may well play a more important role in shaping his legacy.

LeBron has never shied away from standing behind a cause and his vocal stands on social media have changed the way players express themselves in the modern NBA.

LeBron also has a foundation dedicated to ‘positively affecting the lives of children and young adults through education and co-curricular educational initiatives.’ 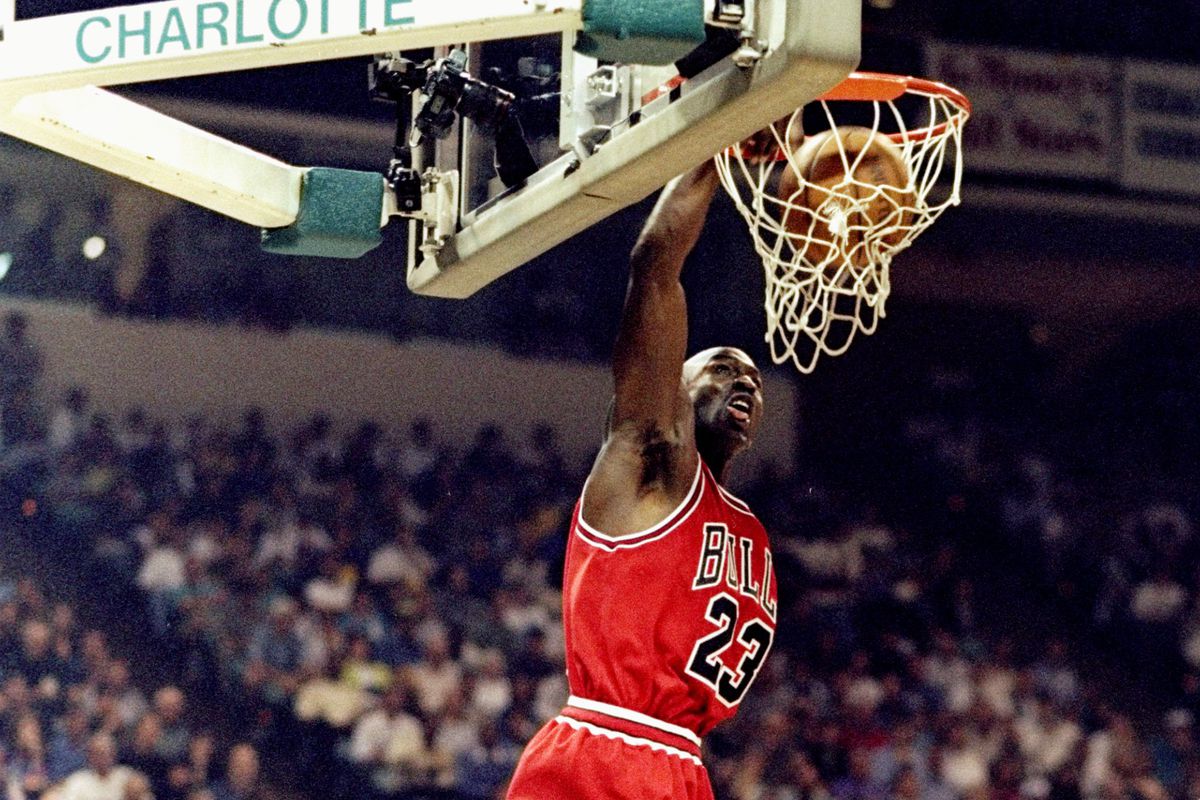 The greatest player of all time, Jordan was not just a prolific player on the court, but also a marketable athlete off it.

With Jordan’s arrival in the league and subsequent domination, NBA players had gone from simply being world-class athletes to actual celebrities whose every move was scrutinized and adored by fans the world over.

Jordan’s Air Jordan sneakers are inarguably the greatest bit of basketball merchandise ever manufactured and it changed the landscape of the NBA.

In 2016, athletic shoes generated a whopping $62 billion in global sales and that number has risen exponentially the past few years. All this was possible due to the efforts of one man, Michael Jordan.

His sneakers remain as popular today as the date they were first introduced onto the market, which shows just what an impact Jordan had in the basketballing world during his career.

The Chicago Bulls legend also ensured he was an active presence off the court, aiding in the empowerment of African Americans the world over.