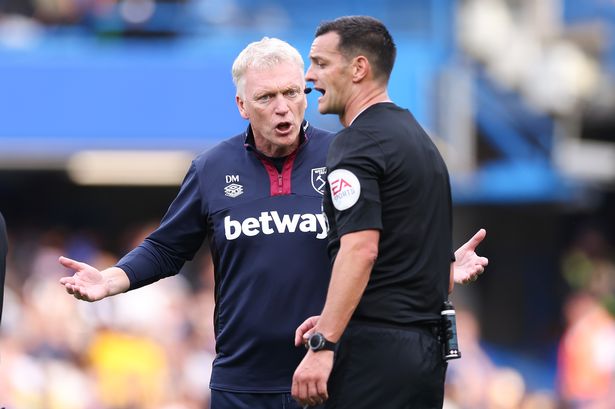 Chelsea FC were the biggest spenders in this summer’s transfer window, which gave them the privilege to sign a lot of talented players from different clubs, but their recent dull form kept them out of the title race until yesterday’s controversial victory against West Ham United.

David Moyes is the veteran manager of the Hammers who relentlessly complained against the Blues for manipulating the result with the help of the referee.

Why did Moyes complain against Chelsea regarding the VAR?

The “scandalous” judgment that cost West Ham a point in the London derby at Stamford Bridge has been criticized by David Moyes, who also accuses Chelsea goalkeeper Edouard Mendy of making up an injury in the moments leading up to Maxwel Cornet’s goal that was disallowed.

Michail Antonio’s strike gave West Ham the advantage over their rivals at their stadium, but goals from Ben Chilwell and Kai Havertz helped the Blues alter the tide of the match.

When Maxwel Cornet scored late on, the Hammers appeared to have stolen a point that they earned, but VAR saved them.

Reece James attempted to head the ball back to Mendy, but it was too weak, and the goalkeeper could only deflect the ball away from Jarrod Bowen, who was advancing, leaving the net empty for Cornet to score.

In spite of the confusion, referee Andrew Madley determined that Bowen had fouled Mendy after being told to view the pitchside monitor.

Moyes then furiously said, “You have seen it, it is a scandalous decision, absolutely rotten from one of the supposedly elite referees – it doesn’t say much about whoever sent him over from VAR as well – it is an unbelievable decision against us, We feel we got back to 2-2 and it was not down to anything we have done. I support a lot of the VAR stuff, I actually think the goalkeeper dives, he is faking an injury because he cannot get to the next one – he did the same on the first goal as well. The referee somehow gets that so wrong it is incredible.”

While Madley ultimately decided to overturn the goal, Moyes focused much of his ire on VAR representative Jarred Gillett for initially calling the on-field referee to review the incident.

Speaking of the bad decision Moyes added, “I’m amazed that VAR sent the referee to see it but I had a quick glimpse myself and thought that even if he goes to the TV, there’s no way he’s overturning this, It was a ridiculously bad decision.”