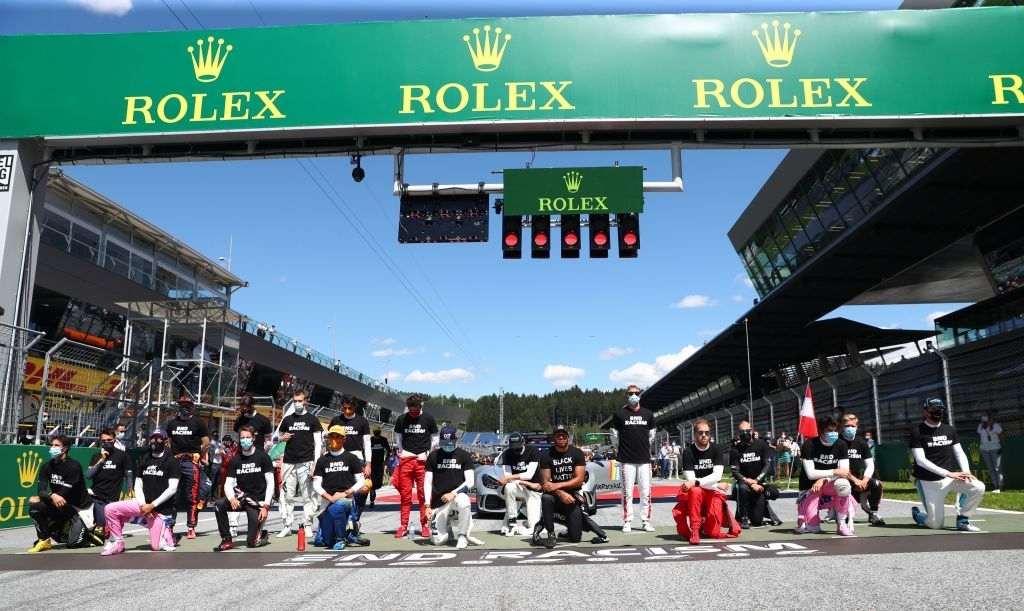 F1 with their new agenda #WeRaceAsOne had slated a slot where the crew members and drivers could take ahead with the initiative of ‘ending racism’ in the Austrian Grand Prix.

Later though with the worked-up schedule, the initiative was merging down the lane, with no media to cover the initiative nor the FIA administration to strengthen the motive. Among the entire troop of drivers, few have skown keenness on taking ahead of the endeavor in a significant way to show their unity in the protest.

In the Austrian circuit, the motorists wore t-shirts that read ‘End Racism’ and Hamilton had his t-shirt labeled ‘Black Lives Matter’. The racers kneeled while the anthem played though there were few who refused to do so, stating it could entangle them in political consequences.  Hamilton wanted to speak to the FIA’s administrations after seeing that the consecutive races which featured no organized ceremony regarding the BLM movement.

The FIA has been busy making several modifications to the routine. It has decided to open the pit lane 40 minutes ahead of the race and has also informed the drivers about the proceedings.

The FIA would express its gratitude towards the racers for their support and the national anthem would be echoed. After the national anthem, there would be a “THANK YOU NHS two-minute Spitfire flyover” and a “clapping moment” for the UK’s National Health Service.

Regarding the new regulations, Ricciardo told motorsport,” We’ve got a lot more time now to go and pee, and have a moment before the anthem; I think it’ll be definitely less rushed, and probably more similar to what we saw at the first race where we were all there a few minutes before. Then we’ll be in formation. Obviously, some standing, some kneeling. But we’ve got our moment before the anthem to do that. That’s what should be going down.”

Ferrari driver, Sebastian Vettel has come down hard and expresses his disappointment in regard to the disorganized curriculum. He said,” It should not be up to us drivers alone; We are not organizing the races, so I think it’s not just in our interest. I think we’ve tried to keep sending a certain message, which we are convinced of is right. But we were, after the first race, let down by FIA and FOM, because they didn’t really help us to organize something.”

Sebastian Vettel and all the other racers hope to get a better organized routine regarding the BLM movement.