“What are you doing holding Rahim’s hand?” Paul brothers’ brutal remarks on reporter for intimacy with their mother sparks outrage The Paul brothers can be very outrageous in their respective sports and on social media, but they adore their mother, Pam Stepnick. Following the Crown Jewel, news personality Radio Rahim claimed to be having an affair with Pam. Although the whole affair was a prank, the Paul brothers were left shaken by the furious conversation.

Logan Paul was scheduled to face Roman Reigns at Crown Jewel last Saturday. However, in the midst of the fight, just as the Maverick was gaining control of the tribal chief, the Bloodline appeared to assist the undisputed champion. Later, the Usos attacked Team Paul, which prompted Jake to make an unexpected appearance. Despite losing the entire fight against the current WWE universal champion, the Paul brothers displayed some incredible ring skills that impressed all wrestling fans.

Logan paul vs Roman reigns is arguably the best that WWE has given us this year
These two were frickin' great.
Absolutely mental‼#CrownJewel #WWECrownJewel pic.twitter.com/Y9kng0ilVm 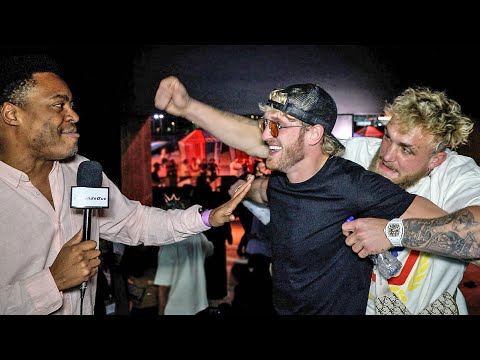 Jake and Logan Paul were at the final press conference for the media question session before the main event fight at Crown Jewel. Rahim, a big fan of the Paul brothers, finally got his chance to interview both of them in one place. Toward the end of the interview, Paul showed a photo of Rahim with Stepnick, and then he asked him, “Rahim, Explain this. Explain that. Why are you humping my mother?” In response, a news personality remarked, “Love is love, guys. Don’t try to get in between us.”

The whole thing was a joke, but it quickly went south when the older brother began to call his mother about the incident. “Pam, you’re married,” the wrestler-turned-Youtuber asked his mother on camera. “Why are you holding Rahim’s hand?” This hilarious exchange, however, left the Paul brothers shaken. Especially after Rahim made the astonishing remark that they could be his “brothers” or “stepsons.”

Pam Stepnick is a loving mother who prioritizes her children more than anything, which has seen on numerous occasions. She recently stood up for the problem child when Hasim Rahman Jr. called him out for canceling his fight with Jake Paul.

The future of these two brothers appears brighter than ever as a result of their recent fights in their respective sports. The older one nearly defeated the tribal chief with his impressive skills, while the younger one beat one of the MMA world’s legends in boxing last week. It is safe to say that both have a bright future ahead of them. They simply need to get there as soon as possible.