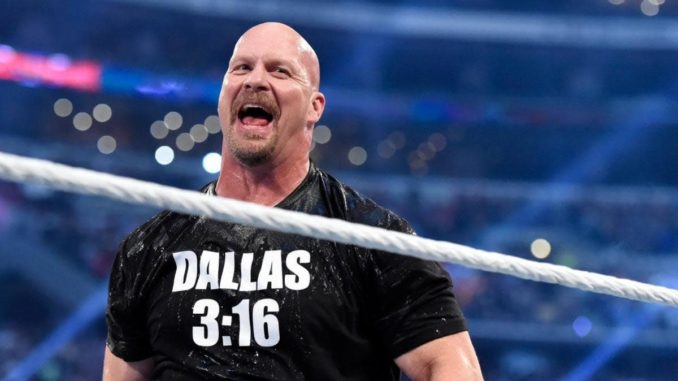 There’s a wild rumor about Stone Cold Steve Austin returning to WrestleMania 39 for a possible fight. Although for a long time, the undisputed world champion, Roman Reigns, was the ideal choice for the opponent recent reports suggest it’s more likely to be Brock Lesnar. This wildest matchup caught everyone’s attention on the internet.

The last time Stone Cold Steve Austin played in a WrestleMania event was last year. It was against Kevin Owens that the Rattle Snake made his entrance after almost two decades.

He demonstrated that, despite his age, he still has what it takes. The company also managed to generate huge numbers of positive reactions by bringing back the six-time WWE Champion. Due to that, WWE is planning a matchup for the legend on the big stage at WrestleMania 39.

“The match that was pitched (to Stone Cold Steve Austin) was not with Roman Reigns.

It was Brock Lesnar, but as you can tell, pretty much from the show tonight (RAW) it’s not happening.”

However, the big budget question still remains: against whom will Stone Cold Steve Austin fight at WrestleMania 39? For a long time, there were some theories about the 58-year-old fighting the tribal chief, Roman Reigns.

Regardless, that theory quickly fell apart when Wrestling Observer Radio’s Dave Meltzer revealed that it was Brock Lesnar who was pitched to wrestle Steve Austin and not Roman Reigns. According to him, the following fight has been discussed for several months.

“The Austin match that was not Roman Reigns, it was Brock Lesnar,” Meltzer said. “But as you can tell pretty much by the show last night, it’s not happening. It’s not on. Something can happen now. It’s been talked about probably for months. I know when that Brock Lesnar-Gunther thing came up, I was told immediately that’s not happening or that’s not the idea right now, maybe it’s gonna happen now but the idea was something that’s a secret. Austin was that secret.”

Fightful Select reports WWE made a HUGE pitch to Stone Cold Steve Austin to have a match with Roman Reigns.

I'm not feeling it as strongly as I would seeing the Rock vs Roman Reigns. There's at least story with the Rock. Austin feels forced.

What do you all think? pic.twitter.com/NvpvoXSG1b

Meltzer also talks about some possibilities for what could go down next with The Beast Incarnate. The pair could face off at the Royal Rumble event, and their rivalry could grow from there.

Although the official announcement of the matchups is yet to come it will be an interesting process to see what comes next.