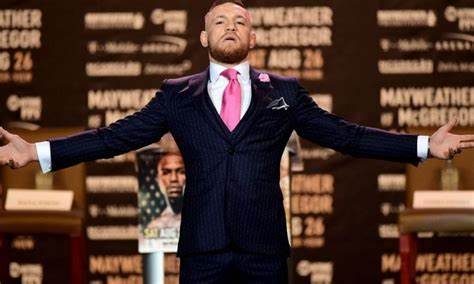 Following the recent induction of many former and present UFC superstars into the “UFC Hall of Fame”, Conor McGregor has insisted he deserves to be a part of the esteemed list because of his countless untouchable records within the promotion.

Looking forward to my own hall of fame entry all the same, I’m a shoe in. First of everything. All the records. KO speed. Knockdown amount. KO’s most divisions. Financials. You name it. No rush tho I’m still in to bust noses open and put opps unconscious. A real goer.

Some people might disagree, but Conor is genuinely one of the most spectacular martial artists to have ever graced the octagon. In fact, he is a crucial facet behind the UFC becoming a global organization. It’s not just his trash-talking skills, however, the Irishman so knew how to score flamboyant finishes during fights.

Despite his recent plummet, Conor is still the biggest draw in the UFC and is regularly called out by fighters despite not being in action for almost a year. Let us take a look at some of the records that the Irishman holds which might get him inducted into the “UFC Hall of Fame”

Conor’s venture into the UFC PPV game did not take too long. He holds the record for the most top-selling PPV attractions in the promotion. “The Notorious ” is responsible for headlining five out of the top-selling PPVs. Even if he lost one of those headliners, he would still have the same appeal in the next event that he would go on to headline. The fight between Conor and former Lightweight Champion Khabib Nurmagomedov amassed a staggering 2.4 million PPV buys- the highest in MMA history.

Conor McGregor also established himself as one of the most popular PPV draws outside of the UFC. He once again defied expectations in his historic 2017 boxing match with Floyd Mayweather. The fight would rank as the second-best pay-per-view in the annals of combat sports.

The UFC title match with the fastest knockout belongs to Conor McGregor. Jose Aldo’s title unification fight with the Irishman received a lot of media attention. In December 2015, McGregor performed the unthinkable by swiftly knocking Aldo out.

As soon as the bell rang to signal the start of the fight, Jose Aldo charged in on McGregor, and as the latter was backing away, he unleashed a left hook that knocked “Junior” to the ground. The world was shocked by McGregor’s ability to back up his character and predict precisely when he thought he would terminate a fight in spite of all the trash talk leading up to the battle.

In the octagon, Conor McGregor also established a UFC record for the most consecutive post-fight bonuses. With such proficient finishing skills, Conor McGregor has risen to the top of another ranking.

Eight post-fight bonuses have been awarded to the Irish superstar. McGregor’s hands have made him a lot of money during his UFC career. In addition to having the most bonuses in a row (eight), seven of those incentives were for winning performance of the night. Of course, McGregor’s two battles with Nate Diaz were what led to the two bonuses.

McGregor’s thrilling rematch with Nate Diaz earned him another UFC fight of the night award. About four months later, McGregor engaged in his second fight, and throughout that contest, he demonstrated how important game strategy and cardio are to succeeding in the UFC. Despite having trouble with Diaz’s length in their second fight, McGregor won by unanimous decision.

Conor McGregor has accumulated a lot of wealth and honors over the course of his career, and there are certain records that his rivals can’t even come close to matching. Although the Irish superstar has accumulated much of his wealth outside of the ring, McGregor still made a fortune in the UFC.

However, it’s clear that McGregor is a shrewd businessman given the rapid growth in sales of his Irish Whiskey Proper No. 12 since its launch. August McGregor is a clothing brand owned by the Irish superstar. As a renowned UFC fighter over the years, McGregor used his fortune for further income opportunities.