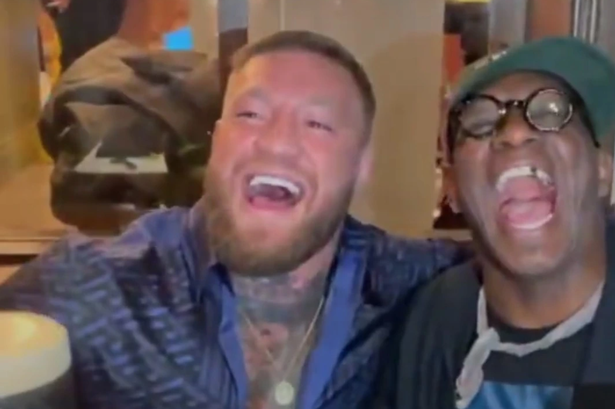 Arsenal FC legend Ian Wright  partied hard with the notorious Conor McGregor in the latter’s pub located in Dublin, Ireland. Videos of him acting drunk and having fun with the former UFC champion have surfaced online.

Ian Wright is a legendary player for the north London club. He is the epitome of what a proper English gentleman looks like. A well mannered and highly articulate footballer who turned into a full time TV analyst.

His fans were shocked to see him getting drunk and dancing around with women in that too with argue with the most controversial MMA fighter, Conor Mcgregor.

Here is the footage of Ian Wright going berserk inside the Dublin pub:

Arsenal legend Ian Wright has been spotted visiting and sharing a pint with UFC icon Conor McGregor in his pub in Dublin 🍺 pic.twitter.com/5rbQhiqrYN

Wright seems to have drank too much and could not handle his alcohol. But he as well as Conor were both mutually star struck as they are very famous personalities.

Conor Mcgregor has been a fan of English Football all his life he looked up to likes of Ian Wright while growing up. Conor himself has become a global icon and a legend in his own right.

Previously, the UFC star has caused mayhem after having too much to drink. It seems that he got his childhood hero in on the act as well. The Arsenal FC veteran will have a lot of explaining to do for his actions in side Conor Mcgregor’s pub.