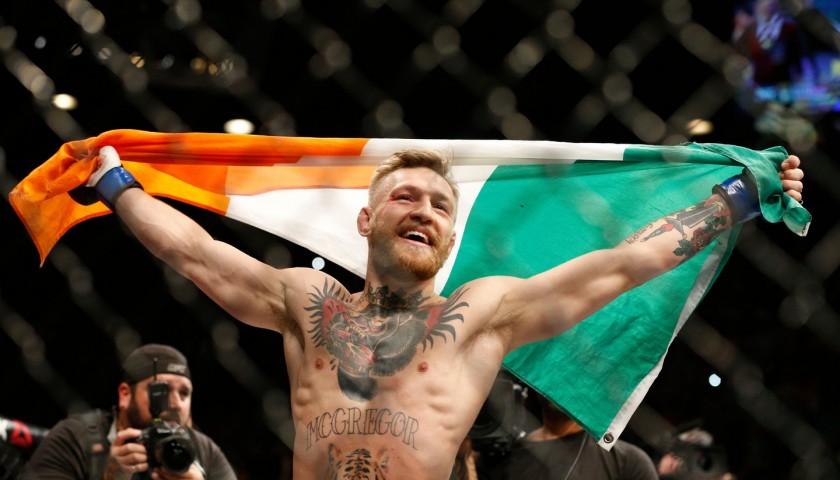 The southpaw from Ireland, Conor McGregor today is a familiar name among the UFC fans. Famous for his knockouts, Conor is a ferocious beast inside the Octagon. The trash-talking hard-hitter is a former UFC featherweight and lightweight champion.

The retired brown belt holder in Jiu-Jitsu, McGregor was a destructive force inside the cage. A master at getting into the head of his opponents before the fight, and inflicting a mental dent into their mindsight. That was the game plan of the ‘Notorious’ Irish.

In 2020, his records stand at number eight in the pound-for-pound rankings for UFC men’s division and number four in rankings of the lightweight division. Today, we will count down the best knockouts the ‘Notorious‘ has had in his illustrious career.

Back in 2011, a leaner and less tattooed McGregor met Aaron Jahnsen. Just minutes into the second round, he had his opponent right where he wanted him.

Pushing Jahnsen to a corner of the octagon, The Irishman unloaded a devastating onslaught of punches. With a mean cross-face locked in, he landed huge punches and knee shots before targeting the head of Jahnsen once more.

Jahnsen was cowering by the point where his opponent struck him down with elbows until the referee called a halt to the fight. That was that, and McGregor paraded around, soaking in the applause as Jahnsen had his head hung low. 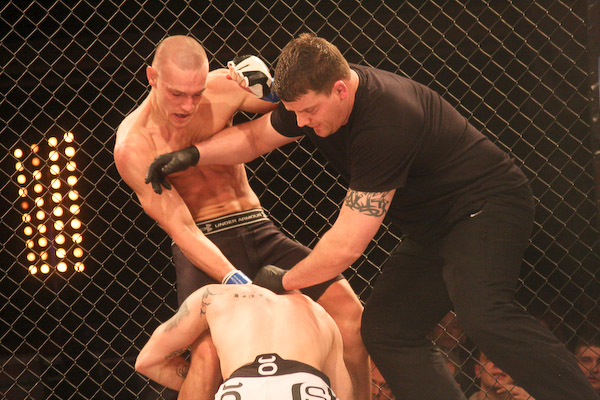 Taking charge in the very first round of this match in 2012, McGregor came out with guns blazing already. O’Keefe’s attempts to grapple Notorious brought no fruition as he kept pounding down.

Several attempts were made to bring down McGregor, but the Brown belt holder in Jiu-Jitsu was ready to play offense. He rained down clubbing blows with the inside elbow to the side of the head of O’Keefe.

Few shots in, and the referee called it. While the dazed and disoriented O’Keefe was being tended by the officials, Irish celebrated his TKO victory, yet again.

This match acted as a reality check for Mike Wood, who realized he did not have what it takes to be in the UFC. The courtesy of this wake-up call was a vicious 21-year-old McGregor.

The match began with a left hook from Notorious that had already sent Wood reeling. In a dazed attempt to grapple and topple his opponent Wood lurched at the feet of McGregor, to no avail.

With his head bowed low, Wood had nothing to protect his face and to get pummelled by a couple crushing left blows. Falling flat on the back, he was prone to have a couple more punches on the face, but the official intervened. It was over, in 16 seconds, one of the fastest knockouts. 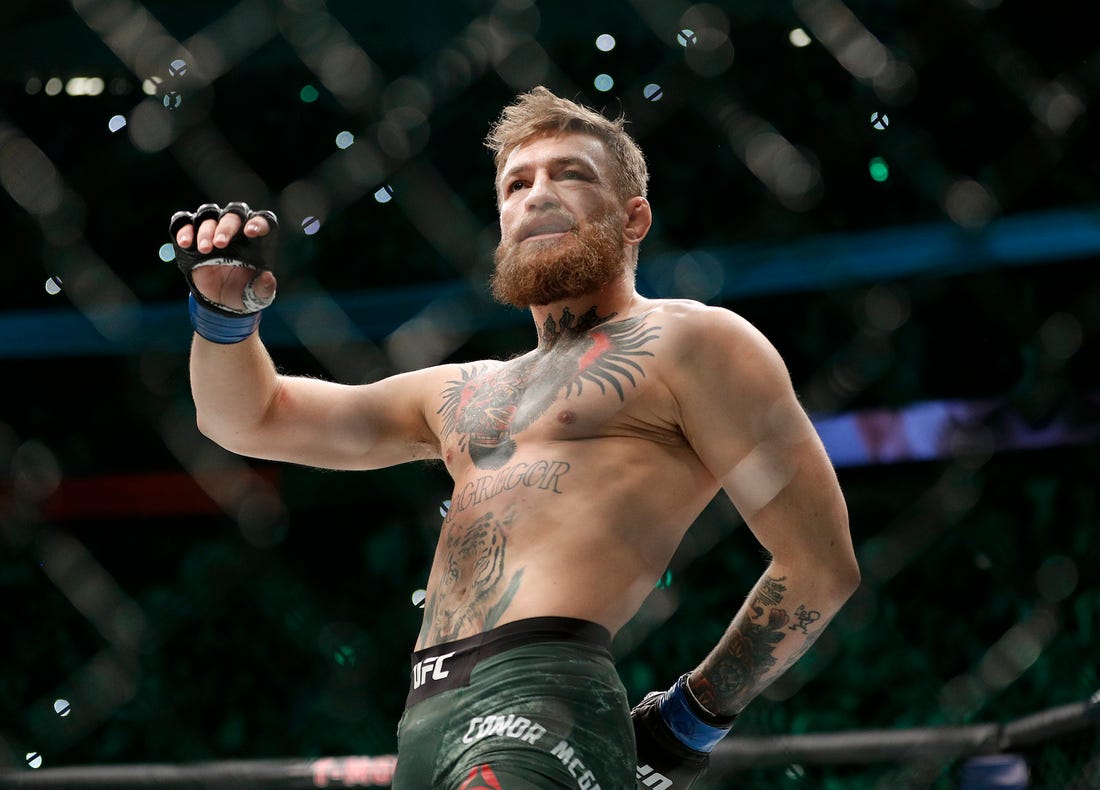 In the 2011 bout, Conor McGregor made short work of his opponent Hugh Brady. Agile with his footing, Notorious took a page out of Muhammad Ali’s book, striking fast and recoiling faster.

Staying on the offense during the entirety of the bout, The Irish was able to land most of his punches right on the money. Brady was rather haphazard with his offense when McGregor brought a right uppercut out of nowhere.

Brady went down like a nine-pin, clocked right at the side of the face. One of the cleanest knockouts, McGregor won fair and square.

Back in 2012, a rather less popular McGregor suddenly did not have an opponent to face for his featherweight belt at Cage Warriors 51 at Dublin. His opponent Jim Alers withdrawing due to injury, a large vacancy was to be filled.

Moving up a weight class, McGregor faced off the Slovakian Ivan Buchinger for the Lightweight championship. A big-time fighter, Buchinger was supposed to pose a large threat to the freshman.

However, there were not too many exchanges, Notorious landed blow after blow. Finally, the standing left hook, one of the go-to moves for knockouts secured the win for Conor McGregor.

It was light out for Buchinger as the Slovakian crashed into a heap. UFC had a new face, it was the Irish, Conor McGregor, holding two titles at the same time, for the first time.

#5. Brimmage collapses at the hands of The Irish 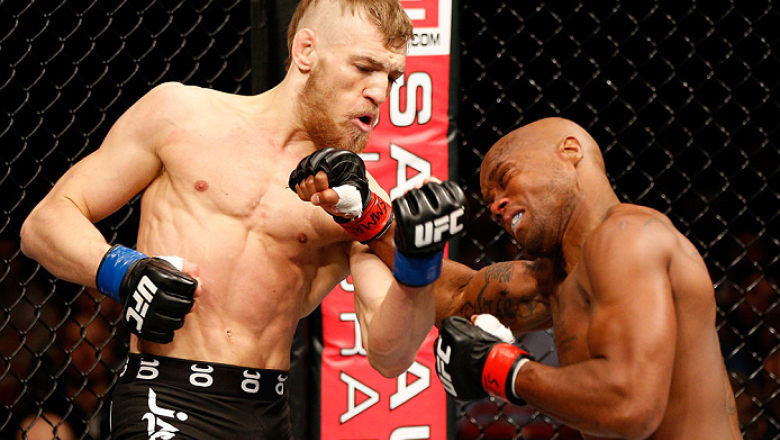 It was the Notorious one’s first night into the big leagues as he faced off the veteran Marcus Brimage, in April of 2013. Surprisingly chilled for someone’s first UFC match, Conor Mcgregor was rather confident going up against Brimage.

Making quick work of his opponent, throwing around kicks and punches, the Irish ended the match in mere 67 seconds. McGregor clocked Brimage, starching him with a right hand.

A memorial debut to be remembered for ages, McGregor soon showed the world what he could bring to the table. The match was over, declaring Irish victorious. 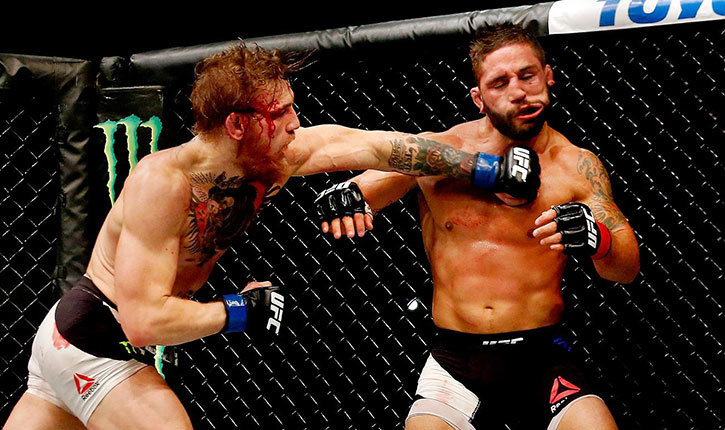 With no prior training in wrestling, Conor was up against a big hurdle when he faced Chad Mendes. A former NCAA wrestler, Mendes was the foremost contender for the featherweight title.

Trash talking in the pre-matches ensued where verbal blows were exchanged. However, undaunted by the former wrestler, McGregor walked down, brimming with confidence.

The match, unlike the previous ones of McGregor, was not one-sided, with Mendes grappling and tossing The Irish to the mat. The former wrestler brought down elbows to the face of the champ, staggering him.

The victory for the champion arrived in the second round when Notorious went for his signature finisher. The left hook, one of the go-to moves for knockouts for Conor McGregor, did the trick.

Mendes went down in pain, but McGregor was relentless, he followed it up with a few more punches before the match was called. Wrestling background or not, McGregor was proving why he was the best inside the octagon. 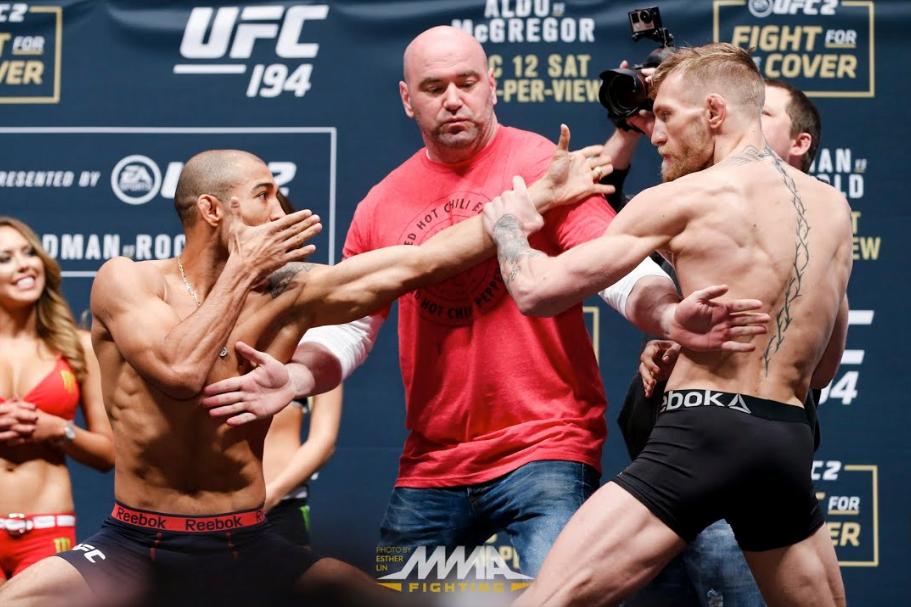 Getting into the head of the opponents and playing mind games has always been the forte of Notorious. He played the same trick with Aldo, who, at that time had been undefeated for around ten years.

An unblemished career in UFC was not sufficient for Aldo who was quickly worked over in the mic by McGregor. Visible tension in the face of Aldo was clear when he entered the ring.

No one, however, would have guessed how swift the Irish actually would be. Bouncing around, in sparring mood with Aldo, barely 10 seconds had passed when McGregor landed a fist.

Jose, with no losses for years, had not seen this coming, in any way. Was it the pressure to outshine a young gun who was rapidly rising or was it due to the verbal battle he engaged with his opponent that he was not himself that day?

There is no telling why did Jose Aldo topple over within 13 seconds of the match. We do know for a fact though, that Conor McGregor solidified himself as one of the best winners through knockouts.

#2. McGregor floors Brandao in the first round 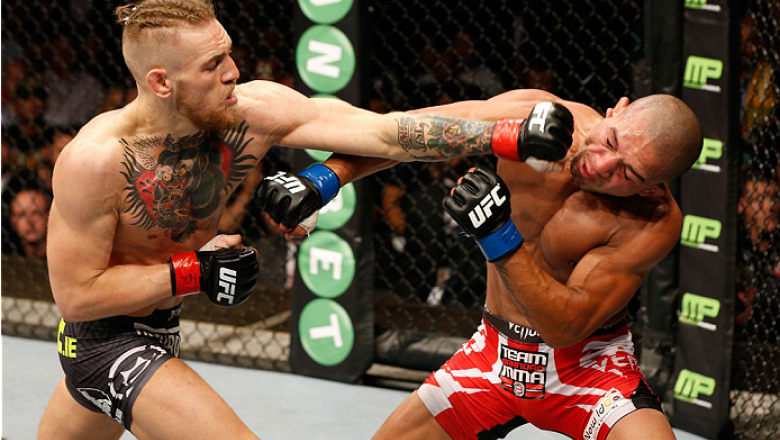 Diego Brandao was in no way a crowd favorite as it had reserved all its emotions for the Notorious Irish, Conor McGregor. This Brazilian had had some turbulences with the hottest name in UFC at that time, McGregor.

He quoted, “Tomorrow I take his head clean off”. The greatest thing about Conor is that he can back up his trash talk.

On the night of the fight, the two men squared off inside the ring, teeing initially with a few punches here and there. The two then went to an all-out battle, with grapples, kicks, take-downs, and elbows.

It was around a minute left to the closure of the first round when a punch of McGregor hurt Brandao, bad. Realizing his chance, Notorious, pushed his opponent to the net, with clubbing blows.

Brandao was hardly able to protect his face, let alone try offense. The referee knew that was it for the match and called it. McGregor celebrated another victory, draped in the tricolor of his country, a proud winner. 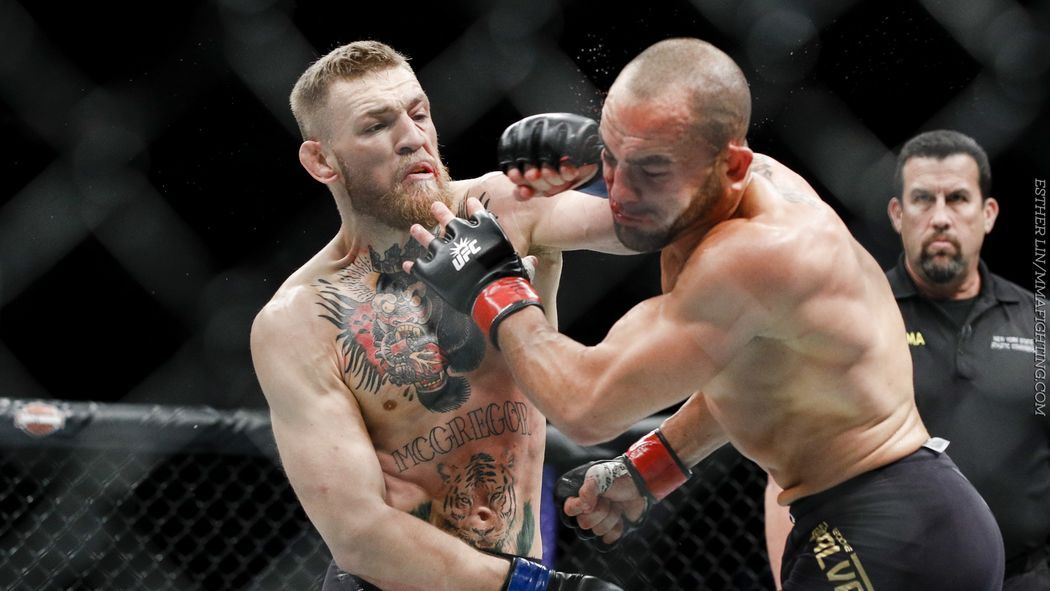 Mcgregor’s opponent this time was Eddie Alvarez, who already held a UFC title. Mcgregor, the champion was looking to unify the two titles, and immersed into his gameplan.

Talking trash only to back it up later, Notorious made his presence felt in Alvarez’s mind. There were crass exchanges and indications of violence with Alvarez snatching the title of Conor.

Hosted in Madison Square Garden, New York, McGregor walked down the aisle as the crowd went wild with cheers. His opponent, an American, from the nearby state of Brotherly Love was however greeted with roaring boos.

An absolute underdog, Alvarez was deemed to be the toughest opponent McGregor had faced off, yet. However, none of the tension appeared on Notorious’s face, who was quite ready to win the second title.

Starting the match, Alvarez looked out of his game, as he kept getting knocked down by Conor. The finisher came in the second frame, around 2 minutes on the clock.

Conor McGregor landed a unique Four-punch combo, with left hooks and uppercuts connecting squarely on Alvarez’s face, one of his best knockouts. Notorious was so fast with his punches, Alvarez did not have time to retract before being hammered on.

He collapsed and Irish was still on him, till the referee intervened and ended the fight. McGregor was now the two-time UFC champion, simultaneously. This went down in history as the fastest title fight.