Conor McGregor, a former champion in the lightweight division, has made a startling prediction about the impending Oliveira vs. Islam Makhachev bout ahead of this month’s gigantic lightweight title fight at UFC 280 in the Middle East. For MMA fans, nothing adds to the suspense quite like the former UFC two-division champion’s astounding ability to forecast the results.

Making outrageous predictions is a common strategy used by elite athletes to pump up motivation for the teams and spectators. In that sense, Conor McGregor’s predictions are highly appreciable, though they contain minute details that later end up coming true.

Conor McGregor, in his career, rose to prominence after a string of stoppage victories before winning the UFC featherweight belt. His streak was sparked by back-to-back TKO triumphs in 2014, as predicted by the ‘Notorious One.’ 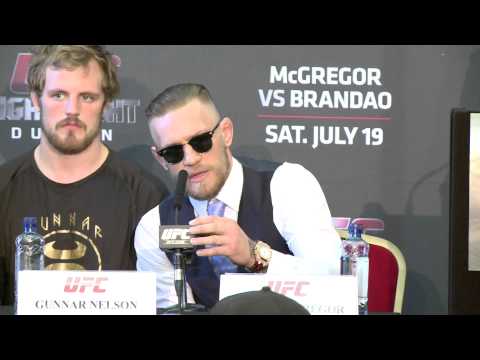 While McGregor has stated that his next fight in the UFC Octagon would be at welterweight, he has reason to maintain an interest in lightweight, the class in which he earned his second consecutive UFC title.

McGregor believes Charles Oliveira will easily defeat his UFC 280 opponent, Islam Makhachev, in their fight for the vacant lightweight title with the statement on his Tweeter, “Olly and easily.”

McGregor prefers Oliveira above Makhachev! Why?

The Mystic Mac’s choice shouldn’t come as a surprise, since he has had problems with ‘Legend’ Khabib Nurmagomedov, who is a close friend of Islam Makhachev. Prior to it, there are several comments by him(Conor) surfacing around which convey uttely that he has no fondness for Makhachev. On this ground of McGregor’s choice, fans has stepped further with many different reactions.

One fan shared his thoughts that McGregor would be afraid to fight Makhachev.

You when Islam wins and you have to fight him next pic.twitter.com/sEzHVz67yT

Not surprisingly, Conor McGregor is cheering against the man who is supported and represented by his main rival, Islam Makhachev. Although McGregor is not alone in his belief that Charles Oliveira will defeat Makhachev.

However, it is still unclear whether “The Notorious” is basing his prediction on his contempt for Khabib Nurmagomedov or if he is capable of appreciating Oliveira’s talent independently of his potential biases.

Instead of McGregor’s prediction, both boxers, Sao Paulo native Charles Oliveira and Islam Makhachev, are incredibly dangerous, and regardless of the outcome, neither fighter will have an easy matchup.