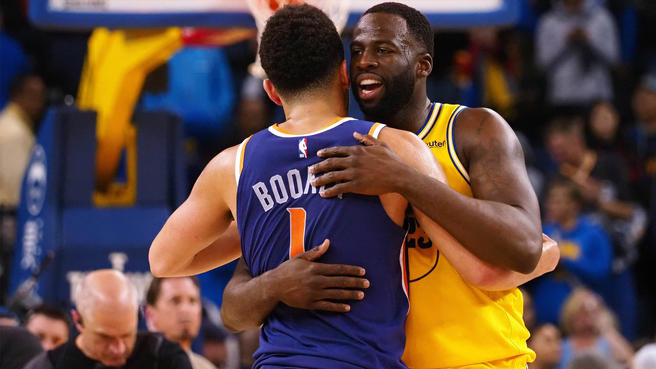 As the Warriors are not a part of the Orlando bubble, Green is co-hosting a brand new show on TNT called ‘The Arena’. This Thursday, when Green was asked to give his opinion on the NBA’s interest in a second bubble. He kept on talking and eventually reached Devin Booker’s career progression topic.

The Warriors forward’s remarks raised a few eyebrows. His probable second career as a TV host took a controversial turn when he started talking about Booker.

“It’s great to see Book playing well and Phoenix playing well, but get my man out of Phoenix,” The Warriors man said. “It’s not good for him, it’s not good for his career. Sorry Chuck, but they’ve gotta get Book out of Phoenix. I need my man to go somewhere that he can play great basketball all of the time and win, because he’s that kind of player.”

This type of explosive remarks from Draymond Green isn’t an isolated incident. He is dropping bombs on the Phoenix franchise for quite some time now. A season prior, Green bashed them for their utilization of draft pick Marquese Chriss.

Chriss later joined Green’s team after which Green again opened his mouth against the Suns. He said, “Let’s be frank about it. When he was there, the organization was terrible. Everything was going wrong. But he get blamed, like he’s the problem. When he left, ain’t nothing go right. That’s my take on it.”

Another milestone in the Books pic.twitter.com/WwLk0G76nu

D-Book, the 13th overall pick of 2015 draft, achieved commendable heights in his short span with the NBA. In 2017, Booker became the youngest player ever to score more than 60 points in a game. He also achieved the incredible feat of scoring 50+ points in back-to-back games.

On the contrary, Phoenix Suns are going through a rough patch for a decade now. Last time they qualified in the playoffs, iPhone 3G was just launched. So, Green’s suggestions have some validity to it.

“They don’t want to see us if Steph & Klay aren’t playing.” ?@Money23Green discusses the possibility of a ‘second bubble.’ #TheSteamRoom ➡️ https://t.co/AUvRLLDZiw pic.twitter.com/Jon1AZLrve

Green also went on to speak about the potential 2nd bubble for the eight teams that were not included in Orlando bubble. “Second bubble? What’s that?” A disbelieving Green asked. “The Gus Macker Toilet Bowl? That’s what you want us to go play in?”

Do you think Booker should do a switch from the underperforming Phoenix Suns? Tell us your thoughts on Booker’s future on NBA in the comment section below.