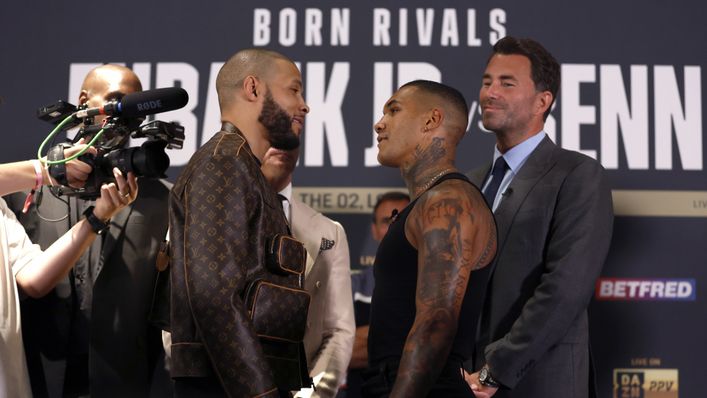 Matchroom Promoter Eddie Hearn intends to challenge the British Boxing Board of Control in an attempt to save Saturday’s megafight between Chris Eubank Jr and Conor Benn after Conor tested positive for a banned substance on Wednesday.

The promoter was initially insistent that the blockbuster grudge bout at the O2 Arena go ahead, but the BBBoC ultimately decided that it was “not in the best interests” of the sport to proceed.

Hearn was unimpressed with their decision to suspend the fight, calling the governing body’s statement “flaky,” and stated that he could be “successful” in rescuing this weekend’s showpiece with an injunction.

Hearn claimed that he was ready to go to court to fight the board’s decision, even though Benn, who he supports, had tested positive for clomifene, according to the Voluntary Anti-Doping Agency. Benn was found to have small amounts of fertility drugs in his system. This drug can significantly raise testosterone levels. Vada and the World Anti-Doping Agency have both put a ban on clomifene.

Wednesday afternoon, the sport’s governing body put out a statement, “On the evening of 4 October 2022, the board of the British Boxing Board of Control Ltd resolved that the contest between Chris Eubank Jr and Conor Benn scheduled to take place on 8 October 2022 is prohibited as it is not in the interests of boxing. That was communicated to the boxers and promoters involved on the morning of 5 October 2022.” 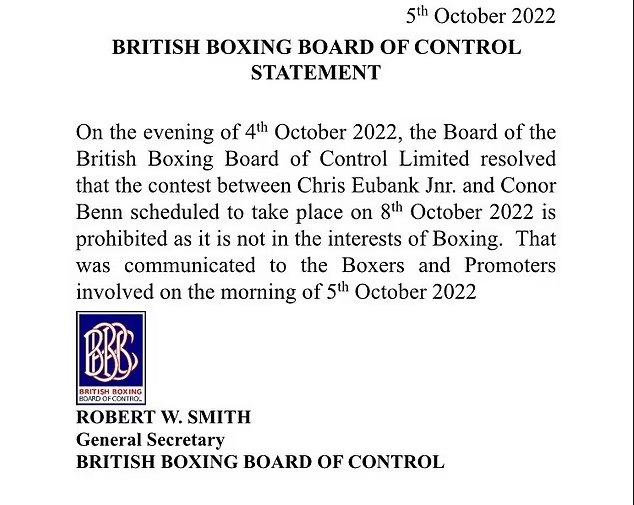 In a statement released by his promotional company, Hearn said: “The B sample has yet to be tested, meaning that no rule violation has been confirmed. Indeed, Mr. Benn has not been charged with any rule violation, he is not suspended, and he remains free to fight.”

The promoter said that Benn had been cleared by all tests carried out by Ukad, the British anti-doping body appointed by the Board of Control, and the fighter himself said he is a “clean athlete.” Benn said: “I’ve not committed any violations. I’ve not been suspended so as far as I’m concerned the fight is still going ahead.

Benn’s promoter Eddie Hearn stated during an interview “As we stand right now, the British Boxing Board of Control is not sanctioning the fight. That does not mean the fight is off, but there is a process we have to go through. Conor Benn is not suspended, he is free and clear to fight. There’s lots going on with the lawyers.”

Is the fight between Chris Eubank Jr. and Conor Benn still on?

The simple explanation is that we do not know yet, there are so many conflicting reports circulating that it is difficult to know which ones to believe, and everyone has their own unique ‘news’ and ‘sources’ when they make claims.

Because of this, Hearn will be as reliable as any other person because he will be participating in all the crucial conversations. However, the most important thing is that it appears that both sides still want the fight to take place.

We wouldn’t want any result to be overshadowed by the craziness that has erupted today, and that isn’t even close to being over yet… Hopefully, we’ll be able to witness the two go toe-to-toe with one another, but only if it’s appropriate.